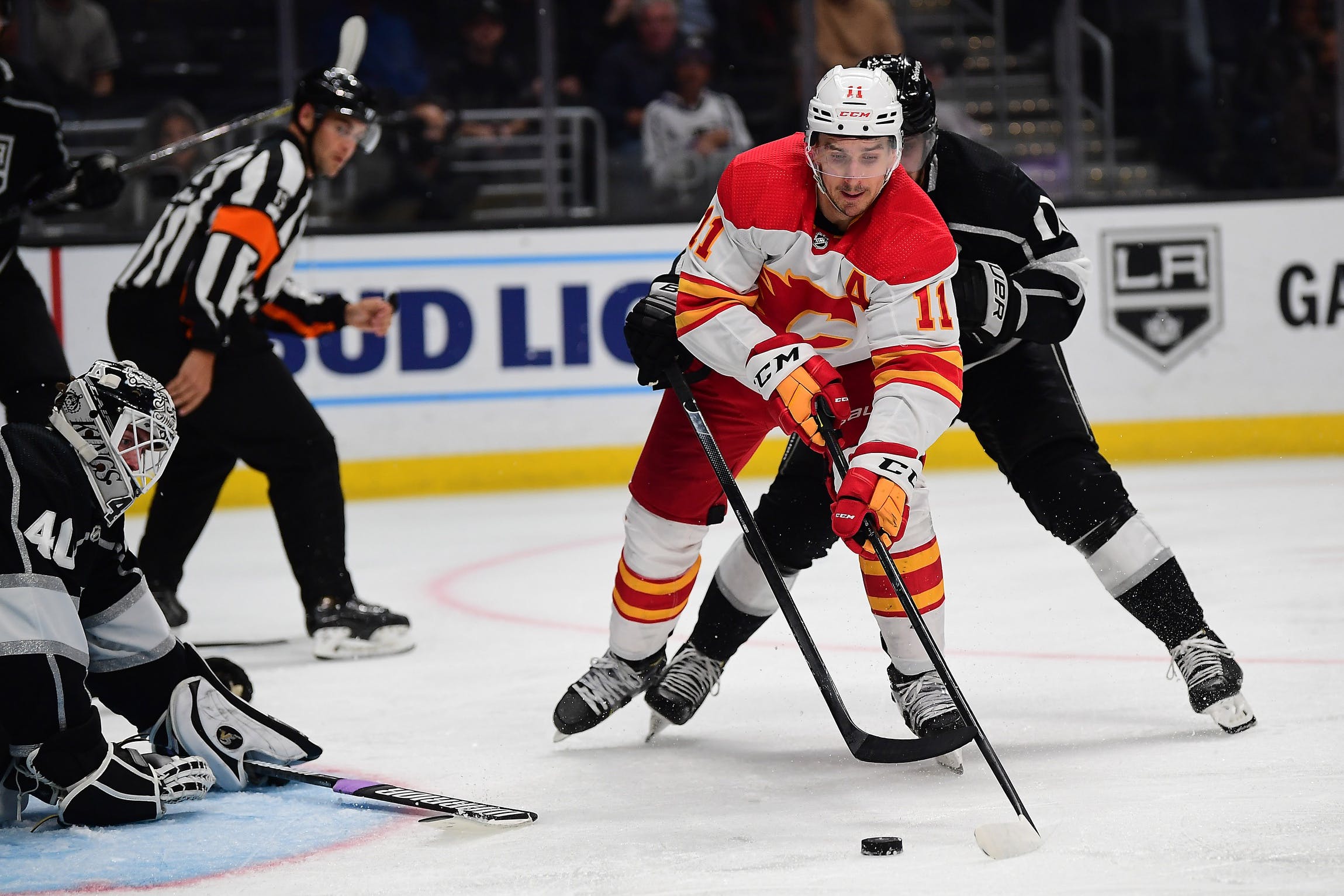 By Ryan Pike
2 months ago
Welcome to our game day content brought to you by NHL odds site Betway!
Two days after ending their losing streak and getting back to .500, the Calgary Flames (6-6-2, 14 points) attempt to get above that mark. But it won’t be easy, as they face a divisional foe in the form of the Los Angeles Kings (10-6-1, 21 points), a team riding a winning streak and playing quite well.
The broadcast begins at 6:30 p.m. MT on Sportsnet West and Sportsnet 960 The Fan!

Projected lines courtesy Daily Faceoff:
Ruzicka – Lindholm – Toffoli
Mangiapane – Kadri – Lucic
Huberdeau – Backlund – Lewis
Coleman – Dube – Ritchie
Hanifin – Andersson
Weegar – Tanev
Zadorov – DeSimone
Jacob Markstrom is the expected starter, backed up by Dan Vladar. Connor Mackey and Kevin Rooney are the expected scratches. Jonathan Huberdeau returns to action and Adam Ruzicka stays in the lineup. And Dillon Dube is lining up as a centre! We’ll see some unique forward groups, if nothing else.
The Flames have played pretty well for the past four or five games. They won one of those games, because hockey can be a brutally unforgiving sport at times in terms of defensive mistakes coming back to haunt teams. Regardless, the Flames are feeling fairly good about their game but still want to make improvements. They’ll need to be sharp against a really tough Kings squad.
One area they could improve upon is their power play, which was fairly blah against Winnipeg on Saturday night.

Projected lines courtesy Daily Faceoff:
Kempe – Kopitar – Vilardi
Moore – Danault – Arvidsson
Fiala – Kupari – Grundstrom
Anderson-Dolan – Lizotte – Kaliyev
Anderson – Doughty
Durzi – Roy
Edler – Walker
Jonathan Quick and Cal Peterson have been rotating in the Kings’ net. Based on the rotation, it seems like it’s Quick’s turn. The projected extras are Jacob Moverare and Lias Andersson.
The Kings just completed a four game homestand where they won all four games. They’re the team they have been for the last couple of seasons: a mixture of veterans at key positions, along with a pretty decent integration of some promising young players. They work hard, play a structured game, and basically force teams to have to out-work them in order to grab points from them.
Keep an eye on Sean Durzi, who’s tremendously good and somehow still underrated in NHL circles.

The Flames are without Oliver Kylington and Michael Stone.
The Kings are without Alex Iafallo and Brendan Lemieux. Brandt Clarke is in the AHL on a conditioning loan after being a healthy scratch for five games.

This is the first of four meetings between the Flames and Kings in 2022-23. In 2021-22, the Flames won two out of three meetings with the Kings: they had two regulation wins and a shootout loss, so they captured five of a possible six points against Los Angeles.