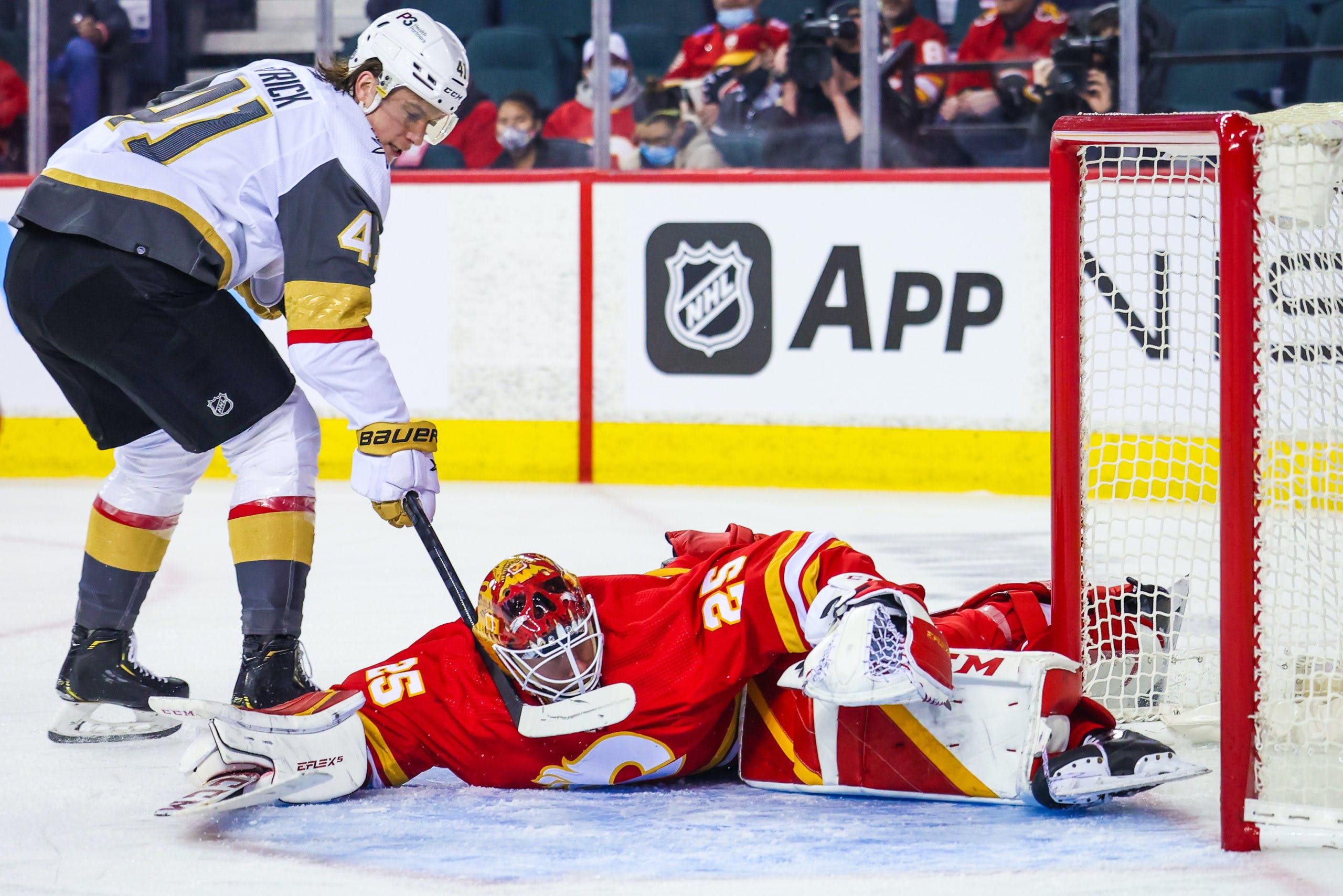 By Ryan Pike
9 months ago
Win, and they’re in. That’s the stakes for the Calgary Flames (45-19-9, 99 points) in Thursday night’s game at the Saddledome. For their opponents, the Vegas Golden Knights (40-29-5, 85 points), a win merely keeps them alive in the pursuit of a Stanley Cup playoff spot. But the Flames can punch their ticket to the big dance and put themselves a step closer to clinching the Pacific Division with a good performance tonight. Can the Flames deal a crushing blow to a desperate Golden Knights squad and cement their own playoff status at the same time?
The puck drops just after 7 p.m. MT. Catch all the action on Sportsnet 360 or Sportsnet 960 The Fan! (Sportsnet West is carrying the Edmonton/Nashville game.)

Projected lines via Daily Faceoff:
@Johnny Gaudreau – @Elias Lindholm – @Andrew Mangiapane
@Dillon Dube – @Mikael Backlund – @Matthew Tkachuk
@Blake Coleman – @Calle Jarnkrok – @Tyler Toffoli
@Milan Lucic – @Ryan Carpenter – @Trevor Lewis
@Noah Hanifin – @Rasmus Andersson
@Oliver Kylington – @Chris Tanev
@Nikita Zadorov – @Erik Gudbranson
We’re expecting @Jacob Markstrom to start in goal, backed up by @Daniel Vladar. The expected extras are @Brett Ritchie, @Michael Stone, @Connor Mackey, and emergency recall @Adam Ruzicka. Gudbranson and Kylington are back in after missing a few games with injuries and/or illness. Needless to say, the Flames are dressing their “A” lineup against Vegas.
The Flames have won five in a row, a nice bounce-back after a disappointing 0-2-1 stretch prior to that. The Flames have been playing pretty well of late, but the difference between their “good” games and their “bad” games has been execution and battle level. Heck, we saw two drastically different urgency levels in Tuesday’s comeback win over Seattle. When the Flames have a fire lit under their butts, they’re a really good team. When they don’t, they’re still a team with good enough structures and habits that they can hang around in games where they’re not quite at their best. And that’s why they’re just a point away from hitting 100 standings points for the sixth time in franchise history.
If the Flames get a point, they clinch a playoff berth. If they win in regulation, overtime or the shootout, they also capture home ice in the first round.
Matthew Tkachuk enters the home stretch with 92 points, within spitting distance of joining Johnny Gaudreau in the 100 points club.

Projected lines via Daily Faceoff:
@Mattias Janmark – @Jack Eichel – @Jonathan Marchessault
@Max Pacioretty – @Chandler Stephenson – @Mark Stone
@Evgenii Dadonov – @William Karlsson – @Mike Amadio
@Jake Leschyshyn – @Nicolas Roy – @Keegan Kolesar
@Brayden McNabb – @Shea Theodore
@Ben Hutton – @Alex Pietrangelo
@Alec Martinez – @Zach Whitecloud
Update: @Logan Thompson starts for Vegas, backed up by @Robin Lehner. Their expected extras are @Jonas Rondbjerg and @Dylan Coghlan.
The Golden Knights are fighting for their playoff lives. They’re three points behind Los Angeles for the third Pacific Division playoff spot (with two games in hand) and three points behind Dallas for the last wildcard spot (with Dallas holding a game in hand). They have an uphill battle for a spot and the Kings are probably the most vulnerable of the teams currently holding down playoff spots. Simply put: the Golden Knights need wins, and a lot of them, and that still might not be enough to get them into the dance.
Expect a desperate visiting team this evening.

The Flames are without Sean Monahan, Oliver Kylington and Erik Gudbranson, though Kylington and Gudbranson may return for tonight’s game.
The Golden Knights are without Reilly Smith, Laurent Brossoit, William Carrier, Nolan Patrick, Brett Howden, Nicolas Hague and Jake Bischoff. They have nearly $13 million of cap hits on their long-term injury reserve.

This is the third and final meeting between these teams this season. So far, the home team has won each game: Vegas won 3-2 in December, while the Flames won 6-0 in February.