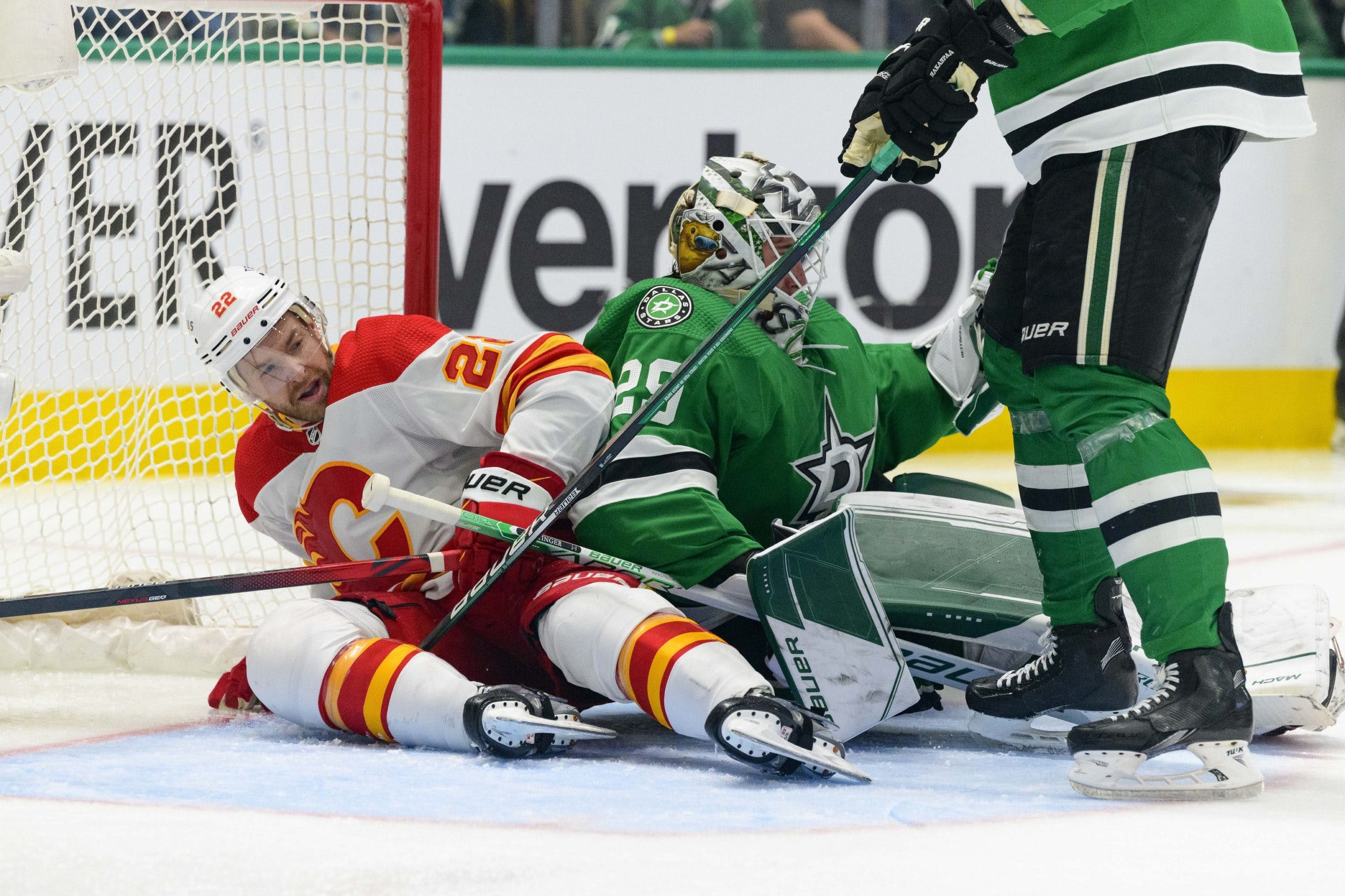 By Ryan Pike
8 months ago
The Calgary Flames headed to Dallas on Friday night with an opportunity to advance to the second round of the Stanley Cup playoffs. If they’re going to advance, they’ll need to do so in a seventh game. The Dallas Stars, with their backs against the wall, out-battled the Flames in Game 6 and fought their way to a 4-2 victory.
This best-of-seven series is tied at 3-3. Game 7 goes Sunday night in Calgary.

The Flames pressed for much of the opening period, stymieing the anticipated early push for Dallas. But Jake Oettinger was superb, as usual.
Midway through the period, Oliver Kylington broke his stick in the neutral zone, leading a Dallas rush the other way. Joe Pavelski made a drop pass to Roope Hintz and cut towards the net, momentarily tying up Erik Gudbranson. That gave Hintz time and space to fire a shot past Jacob Markstrom to give Dallas a 1-0 lead.
Shots were 18-10 Flames (15-10 Flames at five-on-five) and scoring chances were 13-9 Flames in the first period.
The Stars added another goal midway through the second period. Joel Kiviranta barrelled into the Flames zone and cut towards the net. Markstrom laid out to stop Kiviranta’s chance, but Michael Raffl battled to the front of the net and jammed in the rebound to give Dallas a 2-0 lead. (Chris Tanev got sat on during this scramble.)
But the Flames answered back a little bit later in the period. The Stars made a rough line change, which gave the Flames an odd-man rush. Johnny Gaudreau sped into the zone, then found Michael Stone as the trailer and Stone buried his chance to cut Dallas’ lead to 2-1.
A little later still, Ryan Suter was called for interference on Milan Lucic. The Flames couldn’t score on the ensuing power play, but just as the Stars’ penalty expired, Stone fed Mikael Backlund for a one-timer from the boards to Oettinger’s right. The puck went off the Stars’ goalie, bounced off Miro Heiskanen and bounced into the open net to tie the game at 2-2.
But the Stars regained their lead late in the period. Markstrom made a stop off the rush, but the Flames couldn’t collect the rebound or clear the zone. That allowed Dallas to cycle the puck and feed it to Heiskanen at the top of the zone. He fired a shot from right up main street that eluded traffic (and Markstrom) to give the Stars a 3-2 lead.
Shots were 17-9 Stars (16-9 Stars at five-on-five) and scoring chances 14-4 Stars in the second period.
Markstrom made perhaps the save of the series for his side – at the very least the save of the game – on Pavelski on a Stars power play early in the third period.
The Flames pressed throughout the third period, but couldn’t find an equalizer. Tyler Seguin added an empty net goal to give the Stars a 4-2 victory.
Shots were 13-11 Stars (11-10 Stars at five-on-five) and scoring chances were 6-4 Flames in the third period.

The Flames didn’t manage the puck well, particularly off the face-offs. Heck, the Flames lost the vast majority of their draws in the game, and that made them have to chase a bit.
But even ignoring face-offs, the Flames didn’t manage the puck well in their own zone, as they often seemed to be taken aback by Dallas’ speedy forecheck. The second and third Stars goals came off rough play in their own end and getting a bit too jumpy after Stars chances. They were out-hustled, out-battled, and out-executed by the Stars.

Let’s go with two: Markstrom and Stone. Markstrom kept the game close with some fabulous saves, while Stone had a couple of key points and ended up playing a lot more than in previous games due to Tanev leaving the game in the second period.

The Heiskanen goal with 2:28 remaining in the second period was a tough one for the Flames to give up. Dallas defending a lead for the entire third period is tough to beat.

Luke Glendening was run over by Nikita Zadorov in the second period. Somehow, Glendening returned to the game.
Tanev went to the room a couple times after being sat on during the scramble that led to Raffl’s goal. Tanev didn’t play at all in the third period.

These two teams will meet one more time. The series-deciding Game 7 goes Sunday evening in Calgary. It’s a 7:30 p.m. MT broadcast start (which probably means a puck drop around 7:50 p.m. MT).
This best-of-seven series is tied at 3-3.