Flames Post-Game: Oilers’ execution the difference in Battle of Alberta 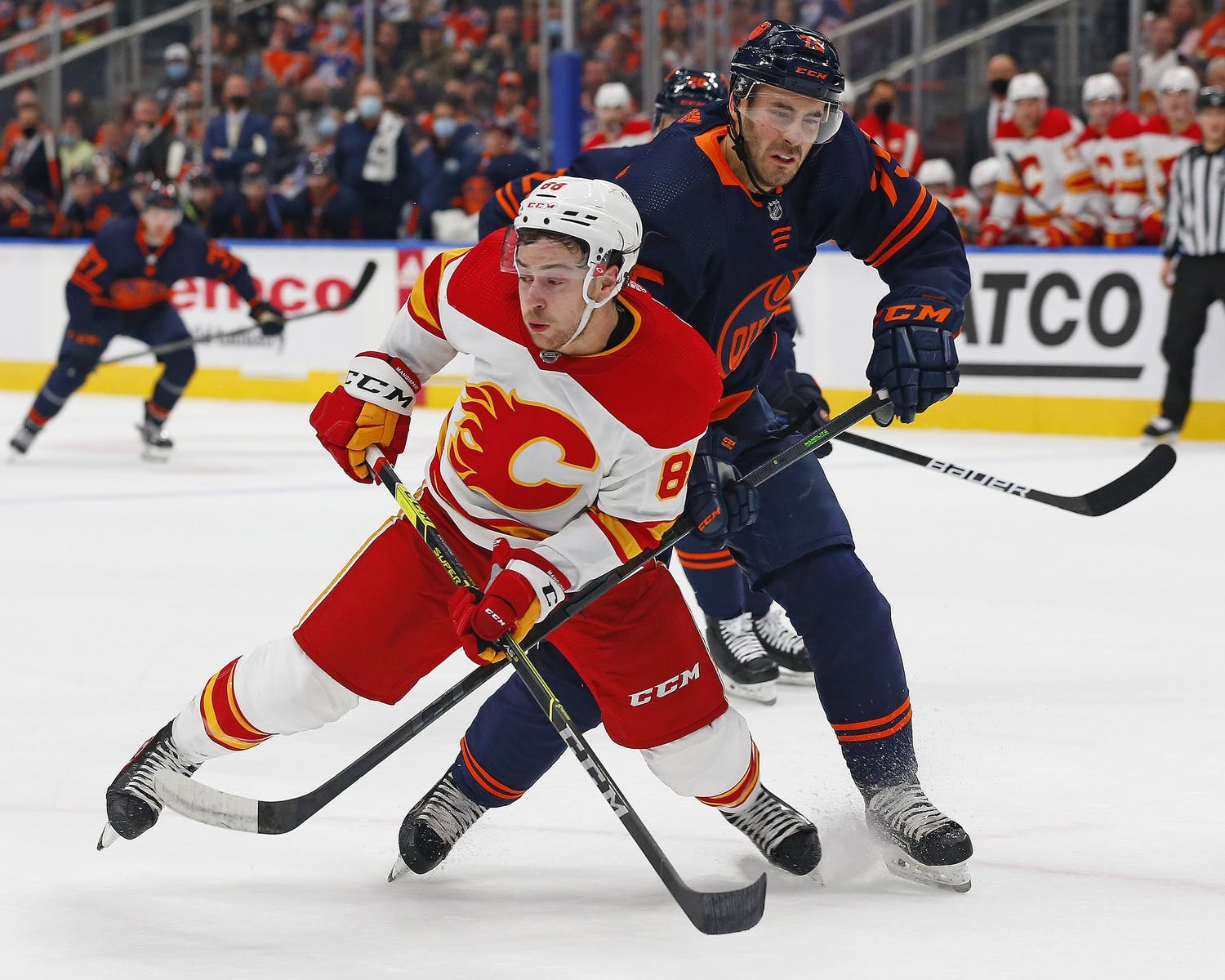 By Ryan Pike
1 year ago
The Calgary Flames played some very good stretches of hockey in their season-opening game against the Edmonton Oilers on Saturday night. They created chances and looked very poised with the puck at times. But some sloppy execution and a habit of taking bad penalties at bad times sunk them.
They lost 5-2 to the Oilers to begin their 2021-22 season.

The Oilers came out of the gates strong, but the Flames took over at even strength after a successful penalty kill (following a Glenn Gawdin offensive zone penalty). But the Flames failed to capitalize on a great chance at one end – Johnny Gaudreau couldn’t bury an Andrew Mangiapane saucer pass – and at the other end the Oilers took advantage of a nice bounce. Warren Foegele chipped the puck on net and it bounced off Nikita Zadorov’s back, allowing Derek Ryan to bat in the falling puck to give the home side a 1-0 lead.
But after Rasmus Andersson was shoved into Jacob Markstrom, he lost his temper and received a double-minor – two minutes for roughing and two for elbowing. Jesse Puljujarvi took a minor on the ensuing power play that wiped out half of it, but the Oilers cashed in nonetheless. Puljujarvi attempted a shot from the right side of the offensive zone that glanced off Trevor Lewis’ skate and went right to Connor McDavid, who buried the puck past a diving Markstrom to give the Oilers a 2-0 lead.
Shots were 15-15 (10-6 Flames at five-on-five) and scoring chances were 8-5 Flames in the first period.
Connor McDavid and Milan Lucic exchanged penalties early in the second period, with the Oilers cashing in when they got their turn at the power play. McDavid leaned into a one-timer from the right side face-off dot and beat Markstrom to give the Oilers a 3-0 advantage.
Midway through the period, though, the Flames finally got on the board. On an attempted zone exit, Juuso Valimaki executed a nice “pin and spin” move, stealing the puck and whipping it towards the net. Dillon Dube got a stick on it, Mike Smith made the initial stop, but Mangiapane jammed in the loose puck near the crease to cut Edmonton’s lead to 3-1.
Shots were 18-9 Flames (10-7 Flames at five-on-five) and scoring chances 8-3 Flames in the second period.
The Flames drew a penalty early in the third period and managed to cash in. Matthew Tkachuk won a battle for a loose puck behind the net, then found Elias Lindholm with a nice pass. Lindholm buried his shot and cut Edmonton’s lead to 3-2.
But 26 seconds later, Cody Ceci made a pass that got past Zadorov and sent Puljujarvi into the Flames zone. He skated in on Markstrom and beat him with a wrister to give Edmonton a 4-2 lead. The Flames pressed late but McDavid completed his hat trick with an empty-netter to ice this one as a 5-2 Edmonton victory.
Shots were 14-9 Flames (12-7 Flames at five-on-five) and scoring chances 9-4 Flames in the third period.

The Flames were pretty good for long stretches of this game, but they made a few key gaffes. Their lapses in discipline gave the Oilers key power play chances when the game was up for grabs. And while the Flames did generate a lot at even strength, they just couldn’t make that one last pass to give themselves enough Grade A scoring chances.
And for all the good things the Flames did, they were out-scored 2-1 at even strength and 2-1 on special teams.

Let’s go with Mangiapane, who scored the first goal of the season and was dangerous whenever he was on the ice.
On the flip side: the pairing of Chris Tanev and Zadorov struggled at times against Edmonton’s big guns.

The Flames cut the Edmonton lead to 3-2 at 5:03 of the third period. Edmonton scored to make it 4-2 at 5:29. The Flames just couldn’t follow up on the momentum they generated with that power play goal.

This was the 300th career start for Markstrom.
The Flames haven’t won their season-opening game since 2009.

The Flames (0-1-0) are back in action on Monday night when they host the Anaheim Ducks in their home-opener at the Saddledome.
Uncategorized
Recent articles from Ryan Pike