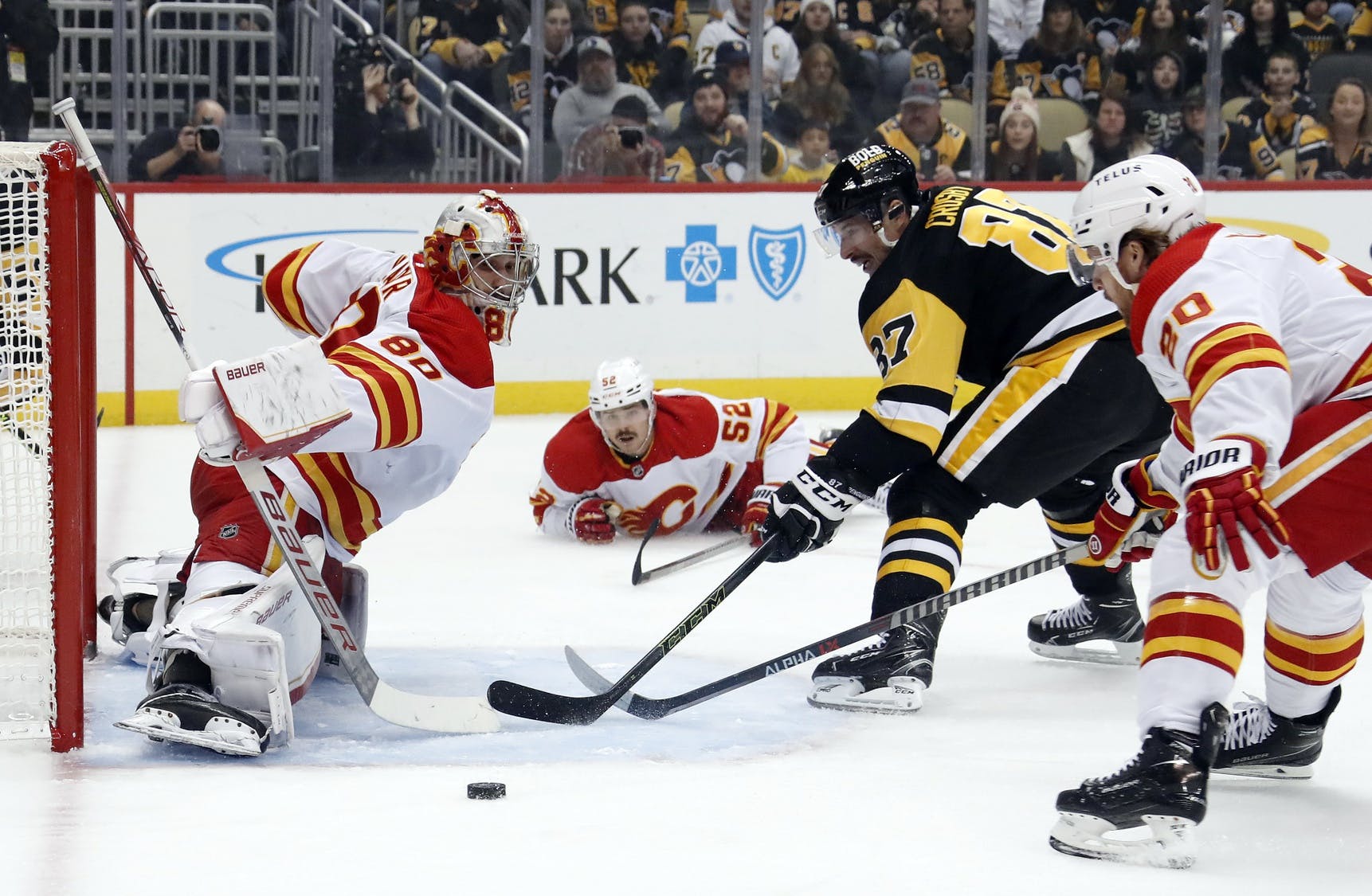 By Ryan Pike
2 months ago
Welcome to our game day content brought to you by NHL betting site Betway!
The Calgary Flames visited the Pittsburgh Penguins on Wednesday night. They allowed the first goal (on the second shot allowed) and were on their heels for decent chunks of the proceedings. But goaltender Dan Vladar was a difference-maker in the best sense of the term, looking calm, cool and collected in net during the Penguins’ siege.
The Flames hung around in this one because of their goaltender. They lost to the Penguins in a shootout by a 2-1 score.

The Flames had trouble with the Penguins’ speed throughout the first period, especially early on. The Penguins took advantage of some disorganization on the Flames side to grab an early lead.
Andrew Mangiapane attempted a dump-in from the neutral zone as his line went for a change. His dump-in bonked off a leg or two and stayed in the neutral zone. The players in red were confused, while Jeff Carter of the Penguins grabbed the loose puck and led a quasi-three-on-two rush. He passed the puck to the high slot for Jan Rutta, whose shot beat Dan Vladar to give the home team a 1-0 lead.
The Penguins took advantage of a Trevor Lewis turnover at the defensive blueline and it looked like they extended their lead to 2-0, but the Flames challenged for the sequence being off-side. The challenge succeeded, the goal was wiped out, and the Flames escaped the first period down by a single goal.
First period shots were 10-8 Penguins (7-6 Flames at five-on-five) and five-on-five scoring chances were 7-6 Flames (high-dangers were 2-1 Flames).
The Flames were a lot more connected and cohesive in the second period, which made for a pretty entertaining, occasionally end-to-end, period of hockey.
The Flames tied things up midway through the period off a nice pressure sequence from the Nazem Kadri line. The Penguins tried to clear the zone but Dennis Gilbert held the line and passed to Chris Tanev. Tanev’s point shot was deflected by Dillon Dube, cutting across the net-front area, and beat Tristan Jarry to make it a 1-1 hockey game.
Second period shots were 16-14 Flames (13-13 at five-on-five) and five-on-five scoring chances were 12-10 Penguins (high-dangers were 4-4).
The Penguins had a lot of good chances in the third period. Vladar had to be very good, and was. Frequently. Neither team scored, so this game spilled past regulation.
Third period shots were 14-8 Penguins (13-8 Penguins at five-on-five) and five-on-five scoring chances were 13-8 Penguins (high-dangers were 4-1 Penguins).
Overtime was scrambly with chances at both ends. Elias Lindholm was called for hooking Sidney Crosby midway through extra time. But the Flames did their level best to block shots, clutter up passing lanes and clear the zone and the Flames managed to survive overtime.
And so this game went to a shootout. Rickard Rakell, Sidney Crosby and Evgeni Malkin scored for the Penguins. Jonathan Huberdeau and Rasmus Andersson scored for the Flames. The Penguins won the shootout 3-2 and the game 2-1.

Friends, if we’re being honest here, it should be acknowledged that the Flames were the second-best team in this game. They were out-played for much of the first and third periods, and the second period was fairly even. The big difference-maker here for the Flames was their goaltending, as they needed their netminder to be exceptional… and he was.
On the negative side, the Flames’ power play was quite shoddy and didn’t do much to generate shots, chances or momentum. (Their penalty kill was quite good, though.)

It’s gotta be Vladar. He was far and away the best player for the road side, making 38 saves to get the Flames to the shootout.

We have a couple. First, select any number of big Vladar saves in the third period. Next, take a look at the entire penalty kill in overtime. They both allowed the Flames to get to the coin-toss that is the shootout.

Gilbert’s assist on Dube’s goal was his first point as a Flame.

The Flames (9-7-3) are back in action on Friday afternoon, as they face the Washington Capitals in a Black Friday matinee. Puck drop is just after noon MT.
News
Recent articles from Ryan Pike