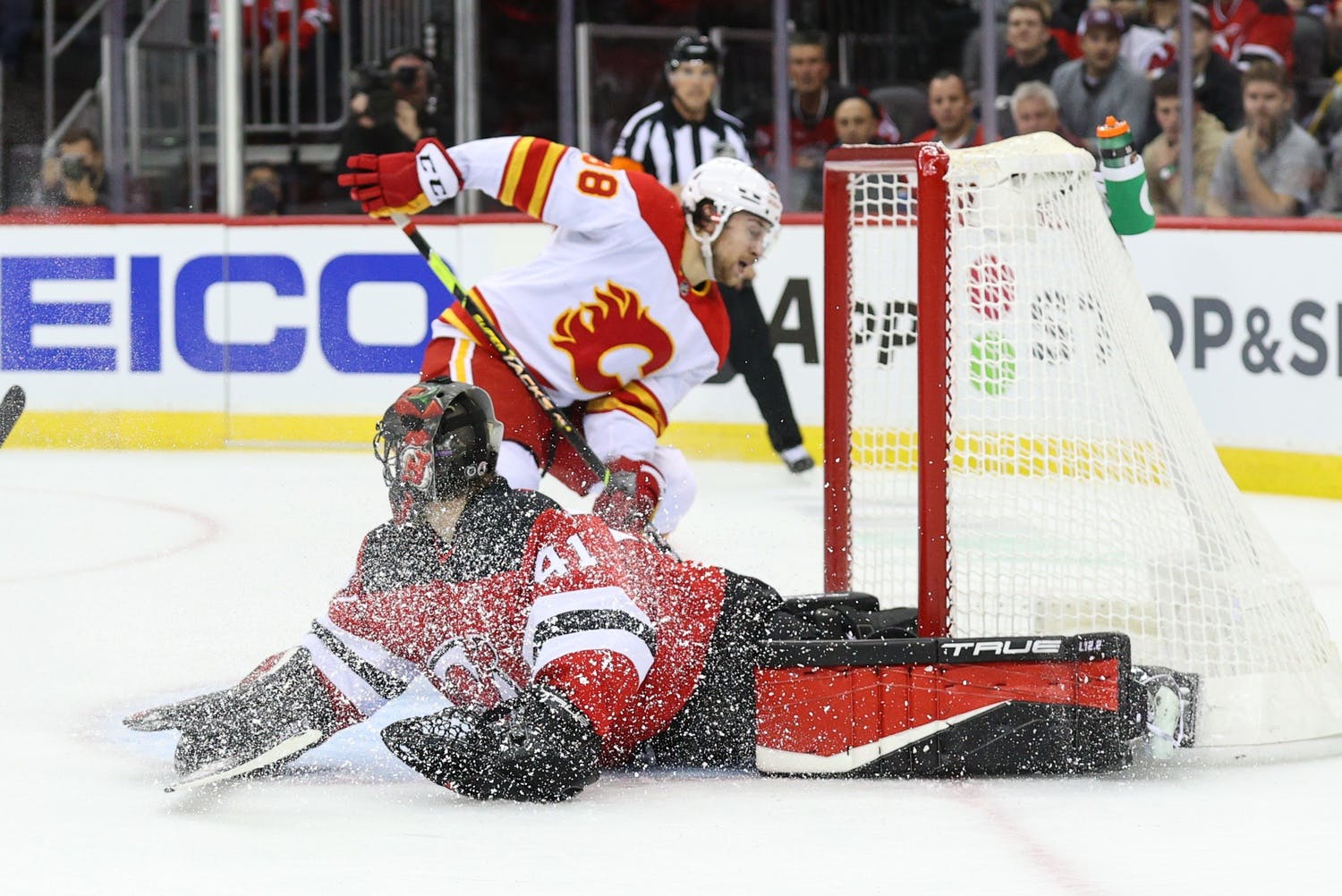 By Ryan Pike
1 year ago
Playing in their second game in as many nights, albeit with minimal travel, the Calgary Flames’ outing on Tuesday evening against the New Jersey Devils was very much a microcosm of their season so far. They scored early, played smart structural hockey, and ultimately skated to a somewhat leisurely 5-3 victory over the Devils.

The Flames had a few decent chances early, but they opened the scoring six minutes into the opening period. Erik Gudbranson found a seam in the neutral zone and sprung Milan Lucic on a breakaway. Lucic’s low shot beat Nico Daws five-hole and gave the Flames a 1-0 lead.
A few minutes later, Andrew Mangiapane scored on a heck of an individual effort. He intercepted an errant pass around the Devils blueline, and then cut to the net. He fended off a Devils defender and unleashed a shot as he hit the slot area, beating Daws to make it 2-0.
After the Flames drew a penalty call, they needed all of 22 seconds of a man advantage to score. Elias Lindholm tipped a Rasmus Andersson point shot past Daws to make it 3-0. That spelled the end of Daws’ evening.
Scott Wedgewood came into the game, and he was scored on by the first shot he was credited with facing. Dillon Dube stole a puck in the neutral zone and sent Mangiapane in on Wedgewood with a breakaway. He deked out Wedgewood and deposited the puck behind him to give the Flames a 4-0 lead.
Shots were 10-4 Flames (8-3 Flames at five-on-five) and scoring chances 10-5 Flames in the first period.
The Flames were content to roll their lines and avoid giving up quality chances in the second period. Dan Vladar misplayed a puck behind the net, with his pass around the boards getting intercepted by Pavel Zacha and fired into the open net to cut the lead to 4-1 Flames. But aside from that, the second period wasn’t particularly interesting.
Shots were 12-9 Flames (12-7 Flames at five-on-five) and scoring chances 10-6 Flames in the second period.
The Flames padded their lead midway through the third period, as Sean Monahan won a corner battle on the power play and found Matthew Tkachuk wide-open. Tkachuk beat Wedgewood to give the Flames a 5-1 lead.
Dawson Mercer responded back right after Tkachuk’s goal, scoring after beating out Oliver Kylington in the slot. Vladar was upset, as a strap on his mask had come loose earlier on the shift and the officials hadn’t whistled it down for him to fix it. But the goal stood, cutting the lead to 5-2 Flames.
On a late power play, Zacha jammed in a loose puck around the blue paint to cut the lead to 5-3 Flames. But that’s as close as this one goal and the Flames skated to a victory.

Well, they were the better team. They were better at five-on-five. They were better on special teams. They didn’t give up a lot offensively overall and they avoided the second period slump (in reaction to the home team’s push) that we’ve seen in recent games. You could make an argument that the home team push arrived in the third period, though.

Mangiapane scored two really nice goals: one where he managed to battle and protect the puck while driving into the zone, the other one where his deke absolutely fooled Wedgewood.

There was a stretch in the middle of the first period where the Flames scored three goals on five shots (on two goaltenders) over 2:48. Very few teams can come back from that kind of outburst early in a hockey game.

The alternate captains were Mikael Backlund, Sean Monahan and Matthew Tkachuk.
Johnny Gaudreau, Elias Lindholm and Andrew Mangiapane extended their lengthy point streaks.
Juuso Välimäki nearly fought Andreas Johnsson, but the linesmen broke it up before anything could happen.

The Flames (4-1-1) are off to the Steel City. (The American One.) They’ll face the Pittsburgh Penguins in the final game of their road trip on Thursday night.
Uncategorized
Recent articles from Ryan Pike