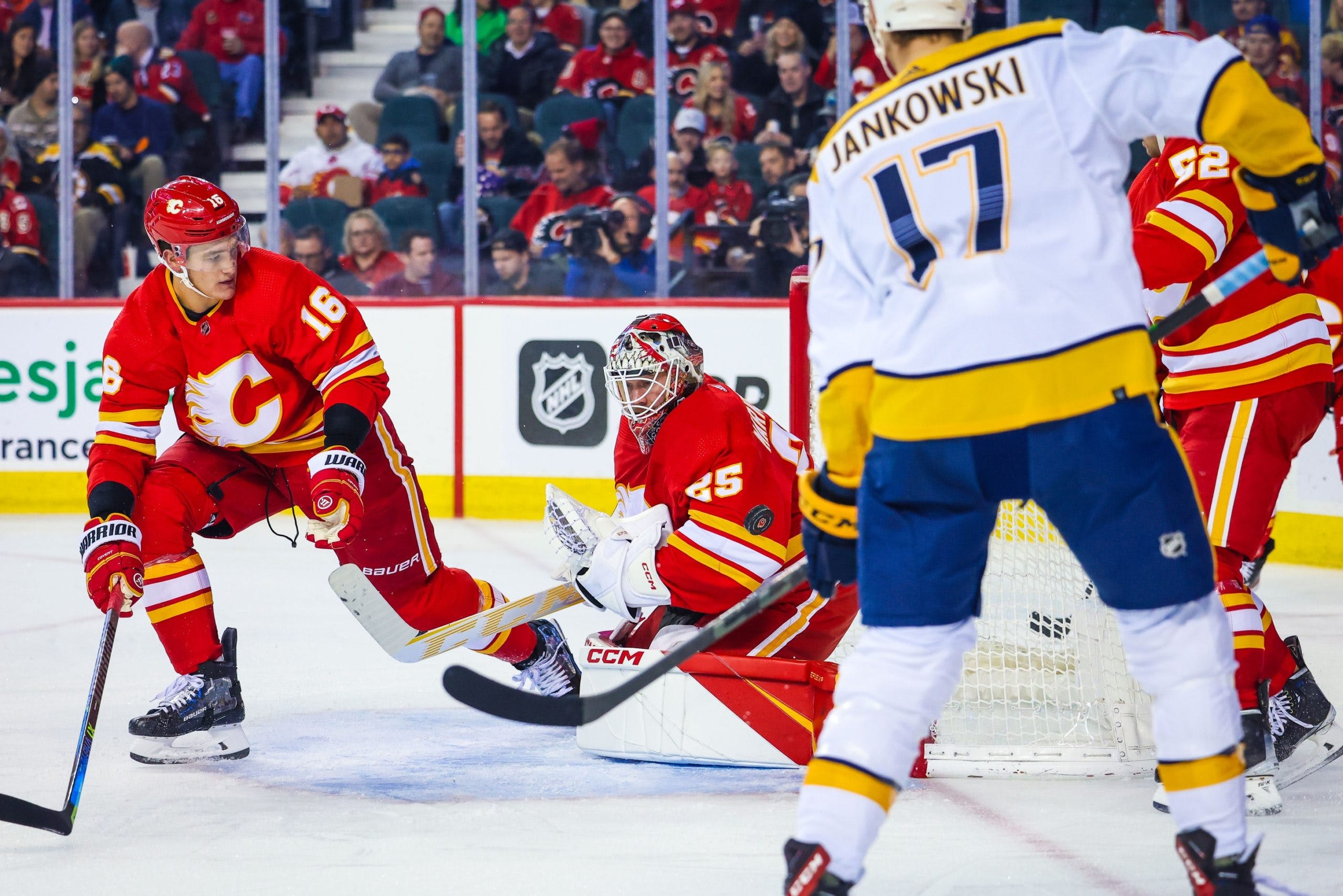 By Ryan Pike
1 month ago
Welcome to our game day content brought to you by NHL odds site Betway!
Friends, sometimes in hockey you play well but don’t get the desired result. Sometimes you play poorly and win. It’s an odd game that way. On Thursday night against the Nashville Predators, the Calgary Flames did not play particularly well, and that was reflected on the scoresheet.
The Flames never held a lead on their way to a 4-1 loss to the Predators, ending Nashville’s modest two-game skid and extending the Flames’ doldrums to three consecutive games.

The opening 20 minutes was fairly dull, uneventful hockey. On both sides, seemingly potent offensive plays were undone by an errant pass or a shot hitting somebody in the shinpads or boots. It was not a particularly entertaining period of ice hockey.
But Nashville managed to grab a late goal. On a bit of a broken play, the puck blooped past Connor Mackey at the defensive blueline and went into the zone. Michael McCarron retrieved it and blasted a bad-angle shot at Jacob Markstrom. It glanced off Markstrom and landed in the slot area, where Mark Jankowski collected it and beat Markstrom to give Nashville a 1-0 lead with 29 seconds left in the frame.
First period shots were 12-3 Predators (10-3 Predators at five-on-five) and five-on-five scoring chances were 11-0 Predators (high-dangers were 2-0 Predators).
The Predators added a couple goals early in the second period to pad their lead a bit.
First, Jonathan Huberdeau was jostled during a Flames line change, leading to a turnover. A couple quick Predators passes sprung Filip Forsberg into the Flames zone on a breakaway, and he beat Markstrom to give the Predators a 2-0 lead.
Dillon Dube was called for elbowing and 29 seconds into the Nashville power play, they made it 3-0. The Predators won the face-off and after a bit of passing and stacking of bodies in front of Markstrom, a Roman Josi shot found its way through the mass of humanity and into the Calgary net.
The Predators essentially tried to kill the clock for the remainder of the second period and were largely successful at preventing good Flames scoring chances.
Second period shots were 13-10 Flames (9-8 Predators at five-on-five) and five-on-five scoring chances were 11-9 Flames (but high-dangers were 5-4 Predators).
The Flames snapped Kevin Lankinen’s shutout bid early in the third period. Dillon Dube chased down a dump-in, and his disruption allowed Mikael Backlund to grab the puck behind the Nashville net. He feigned making a spin move towards the net, then passed to Blake Coleman in front of the net. Coleman buried the chance to cut the Nashville lead to 3-1.
But that’s all the Flames could muster. They pulled Markstrom for the extra attacker, but couldn’t bury anything. Matt Duchene added an empty-netter to make it a 4-1 final.
Third period shots were 14-10 Flames (12-5 Flames at five-on-five) and five-on-five scoring chances were 7-6 Flames (high-dangers were 4-1 Flames).

To be succinct, they were out-played.
They were out-played by Nashville at five-on-five. Their transition game wasn’t particularly good. Their special teams were fairly uninspired. Their defensive play was iffy. Their goaltending was actually pretty decent, but the Flames desperately needed Markstrom to find a way to make a heroic save or two to keep this game close (and bail out the skaters in front of him).
Give the Predators credit, though: they played a pretty solid road game. The home team? They did not. You know it’s a bad game for the club in red when neither of Brett Ritchie or Michael Stone could score.

Markstrom faced a lot of good scoring chances during this game, and he was largely up to the challenge. He couldn’t steal this game for the home side, but he definitely had a good showing – as good as could’ve been expected given the circumstances.

In hockey, goals at the beginning and end of periods can sink a team. The Flames gave up a goal in the final minute of the first to go down 1-0 and then the first minute of the second to go down 2-0.
That’s rarely a recipe for success.

Chris Tanev missed this game with an upper-body injury. Connor Mackey came into the lineup, playing on the third pairing with Michael Stone, and Nikita Zadorov moved up to the second pairing with MacKenzie Weegar.
This was Jankowski’s first game against the Flames in his NHL career. If you’re new here, he was their first round selection way back in the 2012 NHL Draft. He scored, but it didn’t hold up as the game-winner.

The Flames (5-4-0) are back at it on Saturday night when they host the New Jersey Devils.
News
Recent articles from Ryan Pike