Flames Post-Game: Flames tame the Fancy Cats in a shootout 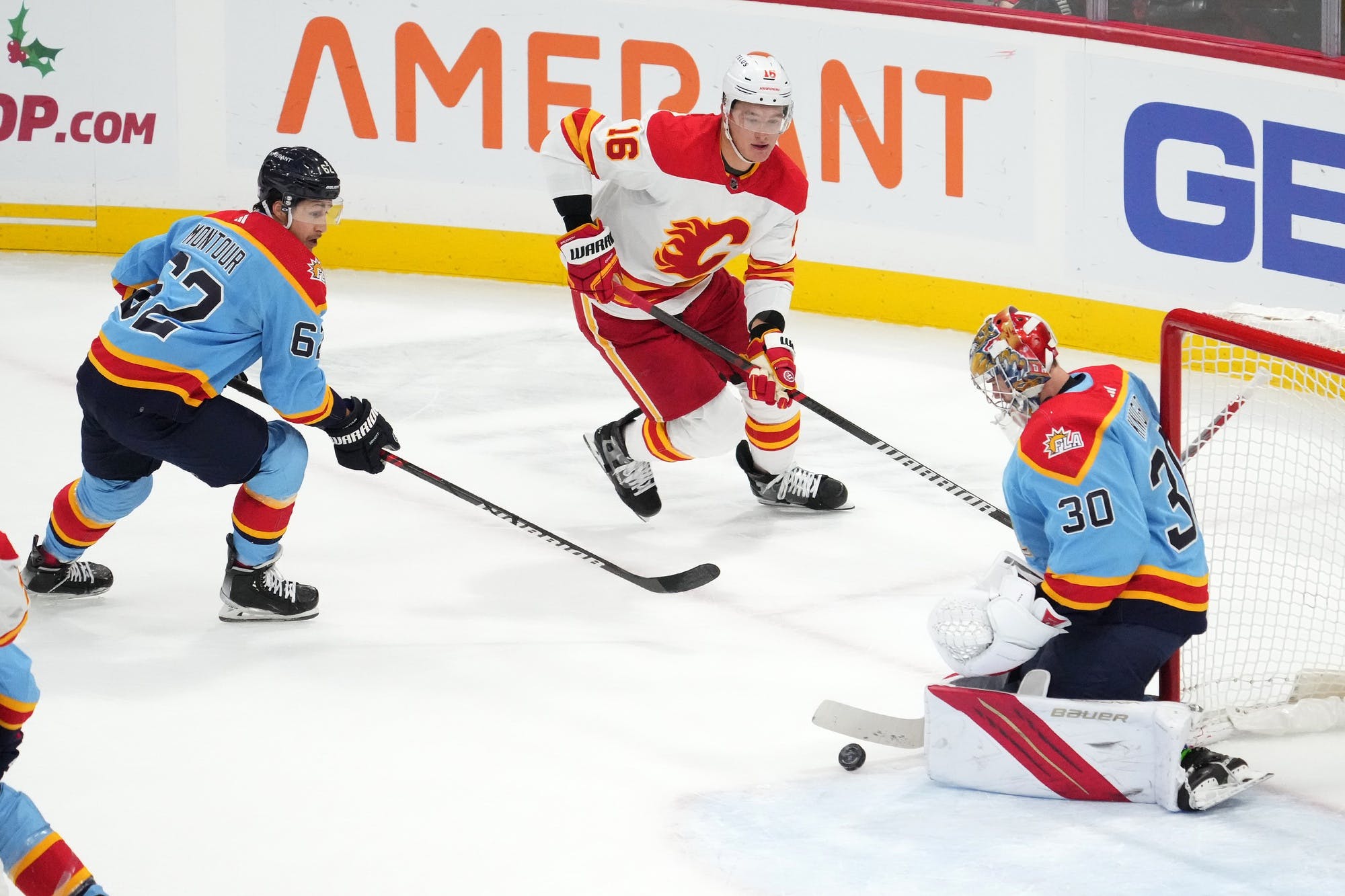 By Ryan Pike
2 months ago
Welcome to our game day content brought to you by NHL lines site Betway!
Saturday afternoon’s meeting between the Calgary Flames and Florida Panthers was a superb 65 minutes of ice hockey. Two strong teams met and went back-and-forth all game, with the Flames getting leads and the Panthers clawing their way back to tie it up.
The Flames managed to edge the Panthers by a 5-4 score in a shootout.

The first period was pretty tight-checking, with a few big scoring chances on either side – and a few big saves by the two netminders involved, Florida’s Spencer Knight and Calgary’s Jacob Markstrom.
Matthew Tkachuk drew a penalty on Andrew Mangiapane, but the Flames killed off that minor. At the other end, Mikael Backlund drew a penalty on Sam Bennett and the Flames cashed in.
The Flames won a battle in the corner to Knight’s right and worked their way towards the slot. Nikita Zadorov and Noah Hanifin made a couple passes to give Adam Ruzicka a clear lane to the net, and Ruzicka buried his shot to give the Flames a 1-0 lead.
First period shots were 9-9 (6-6 at five-on-five) and five-on-five scoring chances were 5-3 Panthers (high-dangers were 1-0 Flames).
The Flames extended their lead early in the second period. Ruzicka entered the zone and waited for reinforcements. Zadorov entered the zone as the trailer, accepted a pass from Ruzicka, and headed towards the net. He fired through an attempted Matthew Tkachuk shot block and beat Knight to give the Flames a 2-0 advantage.
The Panthers got one back on a bit of a whoopsie from the Flames behind the net. Markstrom went behind the net to play a dump-in, but he couldn’t get a pass away quickly enough and Colin White yoinked the puck from him and scored on a wrap-around move to cut Calgary’s lead to 2-1.
The Panthers tied it up a little later. Brett Ritchie roughed it up with Radko Gudas after a (clean) Gudas hit on Elias Lindholm and got the extra minor in the scrum – he was also seemingly hurt in the scrap, with Milan Lucic serving his minor. On the resulting power play, Sam Reinhart finished off a pass sequencing from the slot after a face-off win, beating Markstrom to tie the game at 2-2.
But the Flames answered back a couple minutes later off a simple play executed well. Lindholm won a face-off to Ruzicka, and Ruzicka’s quick one-timer beat Knight to give the Flames a 3-2 lead.
Second period shots were 14-13 Panthers (12-11 Panthers at five-on-five) and five-on-five scoring chances were 8-4 Flames (high-dangers were 3-2 Flames).
The Panthers tied things up early in the third period. The Flames won an offensive zone face-off, but the Panthers battled, stole the puck on a scramble, and headed the other way. Sam Bennett went for a shot and Markstrom went down in anticipation of the shot. But Bennett’s shot was partially whiffed, and the loose puck went over to Eetu Luostarinen, who got the loose puck and tucked it behind the sprawling Markstrom to tie the game at 3-3.
But a little later, the Flames answered back and retook the lead. A Jonathan Huberdeau check on Aaron Ekblad disclosed the puck in the Florida zone. Mikael Backlund grabbed the puck and fed it to Blake Coleman in the slot. Coleman beat Knight five-hole to give the Flames a 4-3 lead.
But with about five minutes remaining in regulation, the home side answered back yet again. A Sam Bennett shot from inside the right point off the cycle was deflected by Tkachuk past Markstrom to tie the game up at 4-4.
Both sides had their looks late, but couldn’t get the go-ahead goal in regulation. Third period shots were 11-9 Flames (8-7 Flames at five-on-five) and five-on-five scoring chances were 8-4 Panthers (high-dangers were 6-2 Panthers).
This game went to overtime! Both sides had strong chances but neither scored. Shots were 3-1 Panthers.
And so this game was solved by the shootout. Anton Lundell scored for the Panthers. Jonathan Huberdeau scored for the Flames. Rasmus Andersson, in the fifth round, beat Knight glove-side to win this game for the Flames by a 5-4 score.

The Flames went into a good team’s building and played a really good, balanced game. Their play was not without flaws – I wasn’t a huge fan of the timing of Dennis Gilbert’s fight – but overall, they hung with a deep, skilled and strong Panthers team. This was a game that either team could have won – scoring chances were 18-17 Panthers and high-dangers were 8-7 Panthers (all five-on-five) – but the Flames arguably executed a little bit better at key moments than their opposition did.

Let’s give it to Ruzicka, who had three primary points in this game and was just superb.
But a few other gents on the road team deserve praise, particularly Zadorov, Lindholm and Rasmus Andersson.

Tkachuk’s tip-in goal late in the third sent this game to extra time. Given how back and forth the game was, it seemed almost inevitable, but the Flames played well enough here that it would’ve been apt for them to find a way to close it out in regulation. Unfortunately, the Flames have had their challenges closing out games this season, so we got a bit more hockey out of this one.

This was the first game back in Florida for former Panthers MacKenzie Weegar and Jonathan Huberdeau.
Dennis Gilbert fought Ryan Lomberg in the second period. Gilbert has had two of Calgary’s three fighting majors this season.