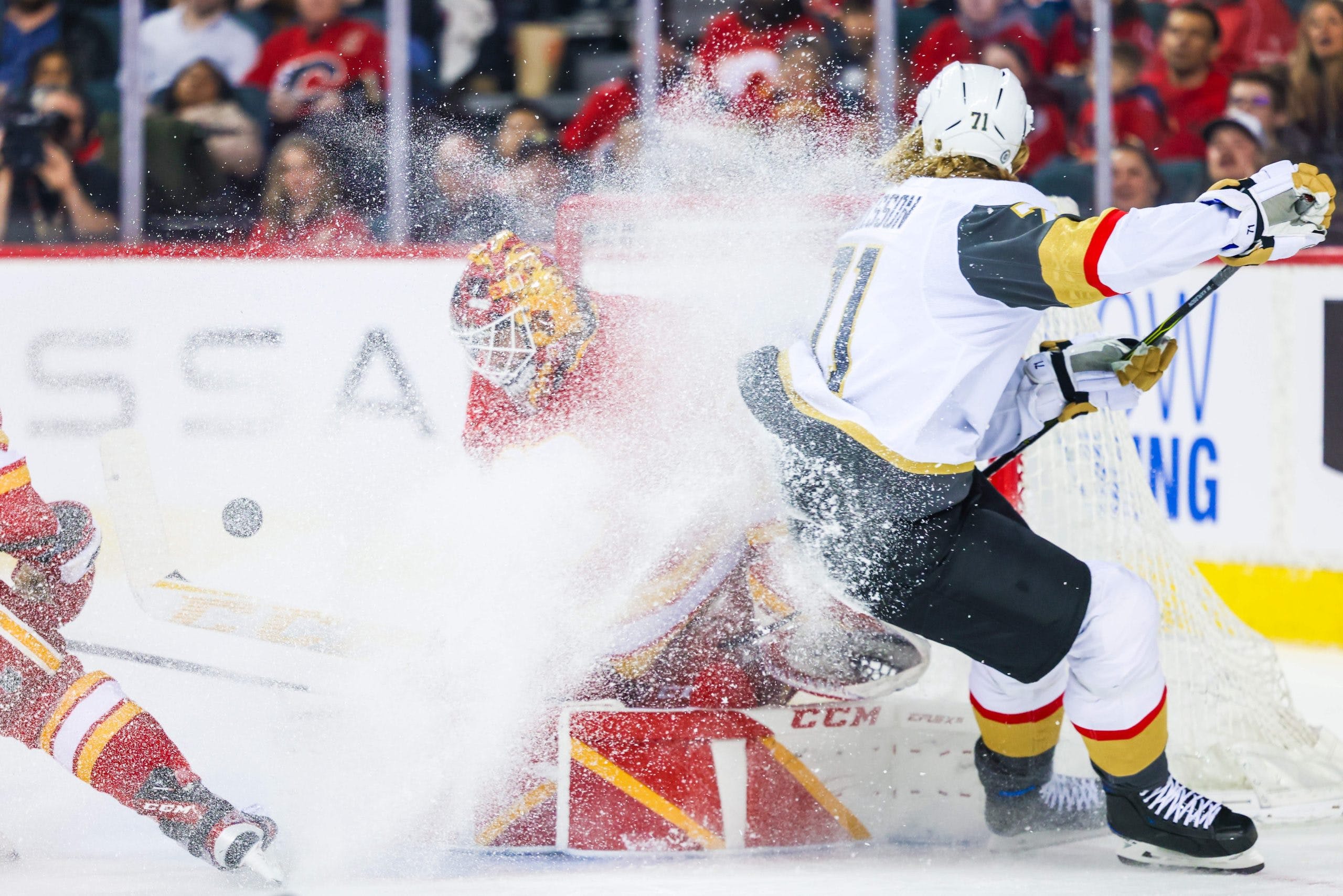 By Ryan Pike
7 months ago
The Calgary Flames had a golden opportunity to punch their ticket for the Stanley Cup playoffs by earning as much as a point against the Vegas Golden Knights on Thursday night. Instead, the Flames looked like anything but a playoff-bound group in a 6-1 loss to Vegas.
Clinchmas celebrations on the Red Mile have been postponed until at least Saturday night.

The opening period was fairly tight-checking, but both teams got their chances. Jack Eichel set up Mattias Janmark for a scoring chance, but paid the price via a big centre ice hit by Nikita Zadorov.
The Flames opened the scoring on the power play after Johnny Gaudreau was slashed in the offensive zone. The first unit weren’t able to cash in, but the second unit did. Mikael Backlund came away with the puck after a battle along the wall just inside the offensive blueline. He fed the puck low to Tyler Toffoli, who made a nice pass to set up Dillon Dube in the slot and Dube made it 1-0 Flames.
The Golden Knights responded back, though. The Flames got crossed up on a line change, which delayed their ability to get back into their own end as Vegas made a few quick passes to get into the zone. Jonathan Marchessault teed up a one-timer feed for Jack Eichel to Jacob Markstrom’s right, and Markstrom couldn’t get across fast enough to block it, and that tied the game up at 1-1.
Late in the first period, Keegan Kolesar crashed into Chris Tanev in the corner of the Flames’ zone. He got his arm up and got Tanev in the face and, after a lengthy review, he received a minor penalty for an illegal check to the head. (The referees’ options were a match penalty or a minor penalty, and they apparently felt that the hit wasn’t intentional.)
Shots were 11-11 (9-4 Flames at five-on-five) and scoring chances 8-4 Flames in the first period.
Early in the second period, Milan Lucic attempted to get Kolesar to fight him – to answer to the high hit in the prior period on Chris Tanev. Kolesar declined and Lucic received a holding penalty. One second after the resulting power play expired, Markstrom stopped a shot from Nicolas Roy but Evgenii Dadonov chipped the rebound over top of the sprawling netminder to give Vegas a 2-1 lead.
The wheels fell off shortly thereafter for the Flames. First, Vegas entered the Flames zone with speed and blew past Nikita Zadorov and Erik Gudbranson. William Karlsson’s initial shot was stopped by Markstrom, but it led to a bunch of confusion as nobody in red seemed to know where the puck was. That allowed Mike Amadio to head to the blue paint and jam the rebound past Markstrom to extend the Vegas lead to 3-1.
40 seconds later, Vegas scored again, as Marchessault redirected a feed towards the front of the net from Janmark. That gave the Golden Knights a 4-1 lead and spelled the end of the evening for Markstrom. He was relieved by Daniel Vladar for the second consecutive game.
With Andrew Mangiapane in the penalty box late in the period for clipping Kolesar, Vegas added to their lead. A Shea Theodore point shot was redirected by Roy, perched in the slot, past Vladar to make it a 5-1 Golden Knights lead.
Shots were 13-9 Flames (8-7 Golden Knights at five-on-five) and scoring chances 11-5 Golden Knights in the second period.
The Flames tried to generate something in the third period, but Vegas was content just to hang out and play defence, and the Flames didn’t get enough dangerous looks to put a dent in the Golden Knights’ lead. Karlsson added a goal late in regulation to give Vegas a 6-1 lead.
Shots were 12-5 Flames (12-4 Flames at five-on-five) and scoring chances 8-3 Flames in the third period.

The Flames played pretty well in the first period. Aside from a sloppy line change, they probably deserved to have a lead after one period. But the team seemed to come completely unravelled after the Kolesar hit to Tanev. They seemed more concerned with sending a message to Kolesar that they completely lost sight of trying to play a smart game against a dangerous hockey team.
Two penalties they took trying to rough up Kolesar directly led to Vegas goals. Two more goals were caused by defensive zone confusion combined with some nice hustle from Vegas. That swung the game completely towards the road team, and Vegas never loosened their grip on the lead.

Dube got the lone goal, so let’s give him the nod.

Vegas scored twice in 40 seconds in the second period, swelling their lead from 2-1 to 4-1. The Flames had no answer for that outburst.

The Flames mixed up their power play units in this one, as they did their forward lines (before going back to the usual lines in the second period).

The Flames (45-20-9) return to action on Saturday night when they host the Arizona Coyotes. It’s the late game on Hockey Night in Canada, 8 p.m. MT puck drop! It’s the second-last Saturday night game of the regular season.
The Flames’ magic number to clinch a playoff berth remains at 0.5. If the Flames win (in any form) or lose in overtime or a shootout, or if Los Angeles fails to win their next game in regulation, the Flames will officially clinch a post-season berth. Both could happen on Saturday.