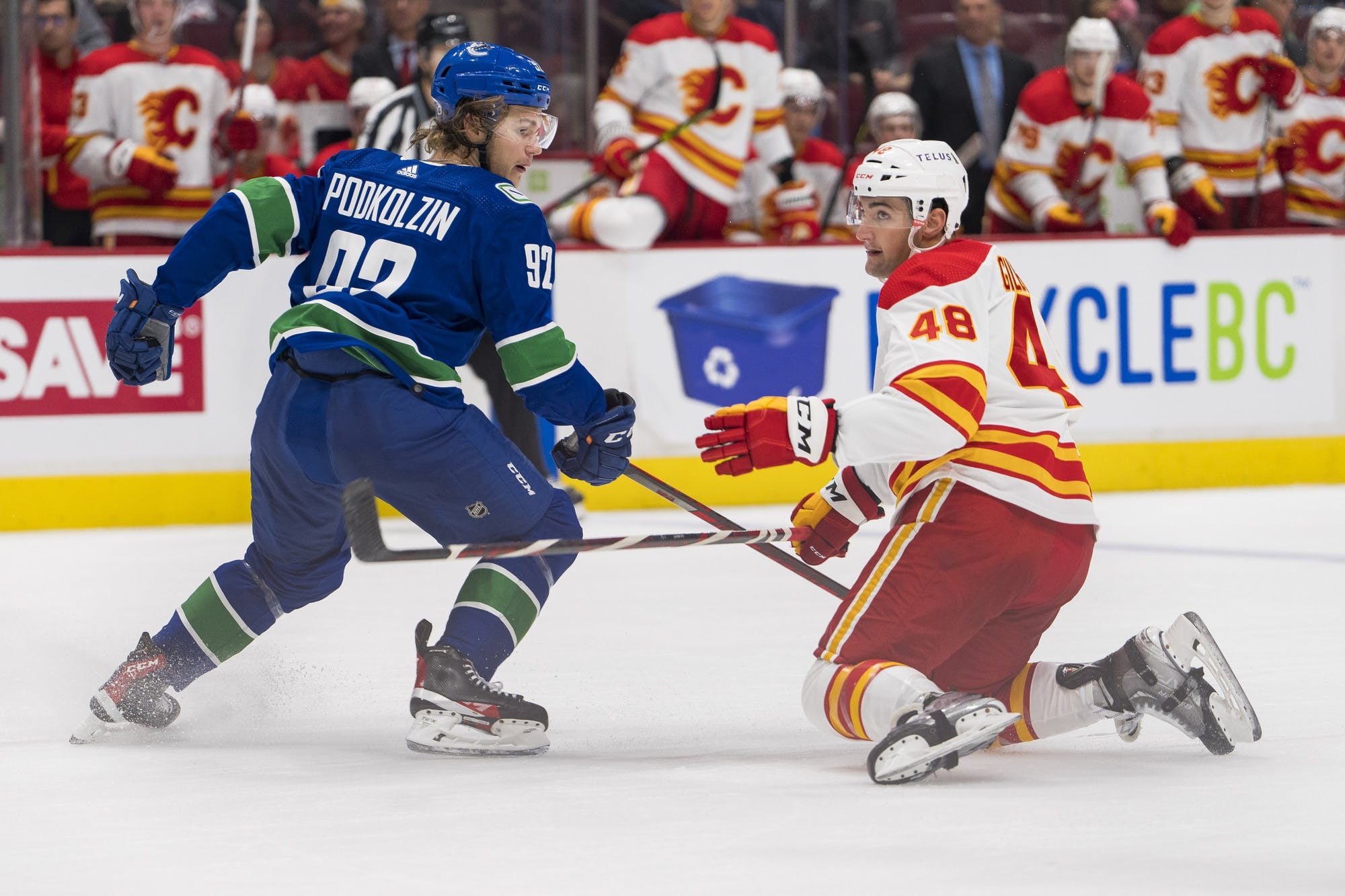 By Ryan Pike
2 months ago
On Saturday night, the Calgary Flames lost to New Jersey in overtime without the services of blueliners Chris Tanev and Michael Stone. On Sunday afternoon, the Flames made some roster moves to adjust for those injuries, recalling Dennis Gilbert and Nick DeSimone from the American Hockey League’s Calgary Wranglers.
The recalls just barely fit under their current salary cap constraints.
The Flames entered Sunday with $1,373,919 in space under the season-long cap ceiling, the sum of prior days’ cap savings and projected future spending that assumes that their current cap commitments remain for the remainder of the season.
Because 26 days had elapsed (and 159 remained), that cap space is pro-rated to reflect the amount of full-year cap hits that the team can accommodate under the ceiling. (This is the same mechanism that allows teams to add fairly large contracts at the trade deadline, as the accumulated space is pro-rated for the remainder of the season). That $1,373,919 figure jumps to $1,598,585 when pro-rated.
Gilbert and DeSimone both carry $762,500 cap hits, for a combined $1.525 million of cap additions.
An aside: Think of the the salary cap as 185 days of cap transactions. If a team has space under the cap each day, that number is divided by 185 to get the daily savings which is banked away and can be used on a pro-rated basis for the remainder of the season. Similarly, if a team with prior cap savings wants to spend over the cap, they can do so only if they’ve accumulated enough prior daily savings to remain under the full-year cap ceiling (and only to the extent that their prior savings enables).
On a daily basis, the Flames have $82.65 million in full-year cap hits on the books, $150,000 over the daily ceiling. But because the Flames accumulated a lot of prior space (about $192,000 of pro-rateable daily space), they’re able to spend a tiny bit over the cap each day (about $800) and remain compliant over the remainder of the season. They’re able to weather this storm for awhile, but they’re probably hoping they won’t need to eat into their savings for too long – the space they’ve accumulated could be extremely valuable later in the season.
Cap space is tight for the Flames right now and they cannot afford to do much else without making other moves, but bear in mind they’re without three regular blueliners in Tanev, Stone and Oliver Kylington (who is non-roster due to personal family reasons) and they’re still able to remain cap complaint. Missing players of their importance isn’t exactly something teams plan for, from a cap perspective or otherwise.
The Flames are back in action on Monday when they visit the New York Islanders.
Editorials
Recent articles from Ryan Pike