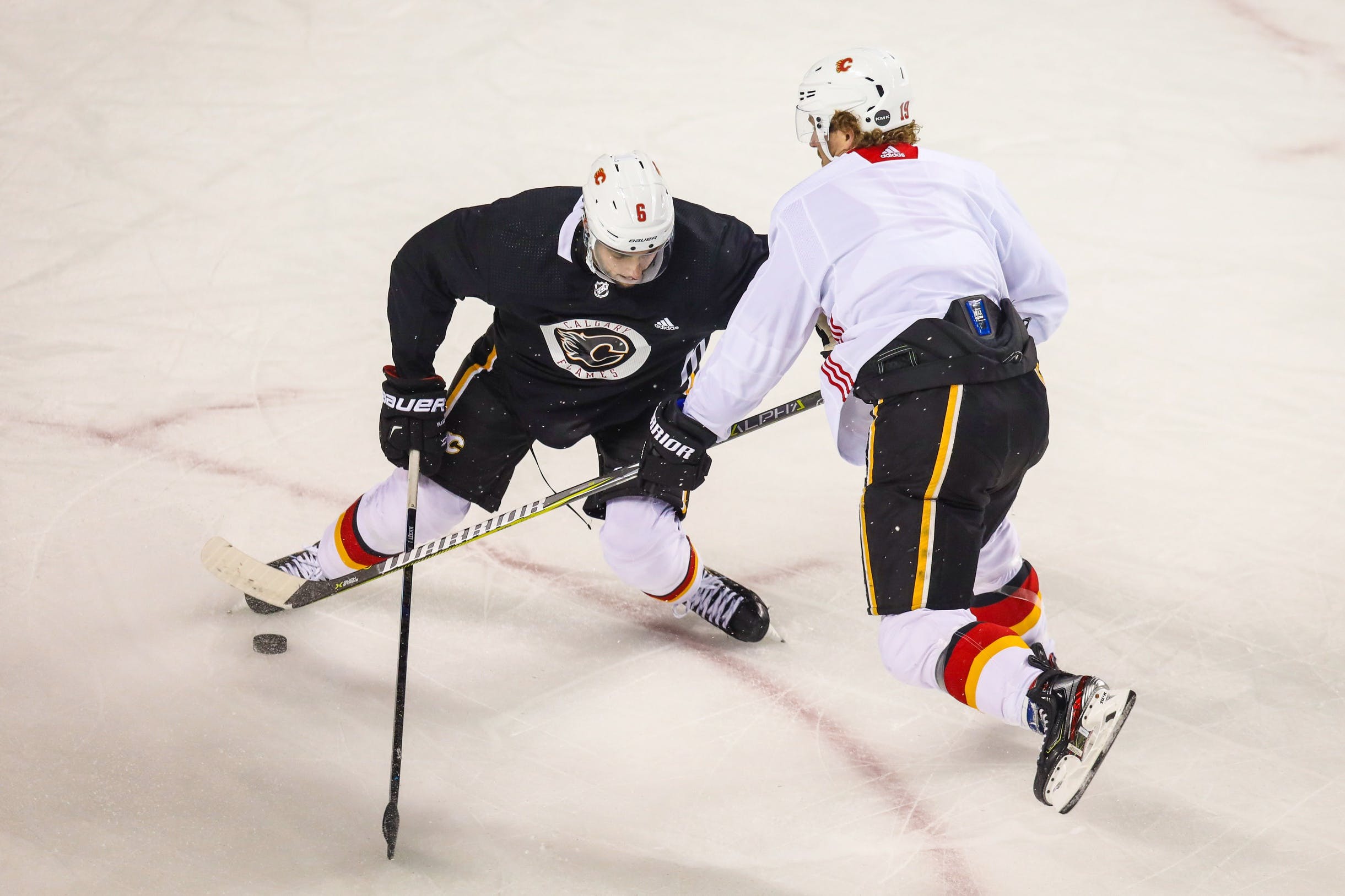 By Ryan Pike
1 year ago
A couple weeks ago, the Stockton Heat were the hottest team in pro hockey and their players, primarily young Calgary Flames prospects, could do no wrong! Well, now things are getting a bit dodgy, with a tough week against Laval and a tough injury to Martin Pospisil.
Let’s check in on all the Flames’ prospects!

Notre Dame got an invite as an at-large team to the NCAA national championship tournament, so Boltmann’s quest for his first college point continues! The Fighting Irish will face Boston College on Saturday and they’re the underdog in the match-up.

Kalix is playing in a best-of-three series with Vannas HC as a play-in for the main HockeyEttan playoffs. The series began with a 3-1 loss on Tuesday.

Francis had two multi-point games for the Sea Dogs, continuing a really nice run for the forward since his trade to Saint John. Quietly, he’s 16th in the entire QMJHL in scoring.

Gawdin had a multi-point week and moved up to the top line due to a couple injuries.

Kerins was a healthy scratch twice for the Heat after making his pro debut the previous week. He’s still just 18 – he turns 19 in mid April – so he probably still benefits from getting his feet wet in a couple games and practicing regularly with established pro players.

Kinnvall returns to action on Wednesday after being out since late January with a lower body injury. HV71 has four games remaining and has clinched last place in the SHL. They’re destined for the relegation playoffs.

After a slow start, Kirkland is heating up offensively. With Pospisil out for awhile, he’ll be leaned up for more minutes and more offensive production from here on out.

Lerby had an assist and was a healthy scratch once. He’s still adjusting to the North American game.

Playing on the top pairing, now with a demoted Michael Stone, Mackey had an assist.

Loko has a 2-0 series lead over SKA-1946 St. Petersburg in the MHL playoffs. They can advance to the conference final on Friday. Nikolayev has no points in the second round thus far.

Pelletier had another productive week offensively as Val-d’Or maintains their placement on the top of the QMJHL standings. He’s 13th in QMJHL scoring despite missing a bunch of time capturing a silver medal at the World Juniors.

Pettersen missed one game due to a minor injury, but returned for Tuesday’s game.

For a snapshot of what happened to Stockton this week, here’s Phillips. The pace-setter for Stockton’s offense was limited to just one goal, a consequence of some injuries, some shuffling in the team’s top six as a result, and generally just a tough match-up against a Laval team that defends pretty well.

Philp caught up a bit to last year’s offensive pace with a couple multi-point games. For someone who had been defined by his goal-scoring in his rookie season, it’s encouraging to see him get assists and utilize his teammates a bit more frequently.

Poirier had a multi-point game against Moncton, earning assists on the game-tying and game-winning goals against the Wildcats. He’s 12th in the QMJHL among defensemen in points.

Poolman missed all of this week’s games due to an injury.

Pospisil had a point this week, then had his leg obliterated by a pretty nasty knee-on-knee hit from Laval’s Yannick Veilleux. Pospisil is expected to be out for 4-6 weeks, which would see him return sometime in late April or early May. The last Heat game is scheduled for April 29, so there’s a decent chance that his season is over.

As with Phillips, Ruzicka went cold offensively this week as a consequence of injuries, line shuffling, and Laval being a tough, hard-checking team to play against.

Playing in Stockton’s bottom six with a rotating cast of depth players, Tuulola had an assist.

Yelesin quietly had a very nice week offensively, doubling his season’s offensive production and doing so entirely at even strength.

Zary begins his WHL season on Friday against the Vancouver Giants.

Wolf had an excellent week. Like, as good as he possibly could have had, given he played twice, won twice, and allowed zero goals on 40 shots. He earned two shutouts, raising his career total to 22 shutouts – third all-time in WHL history.
Uncategorized
Recent articles from Ryan Pike