FlamesNation Roundtable: kicking off the 2021 sprint 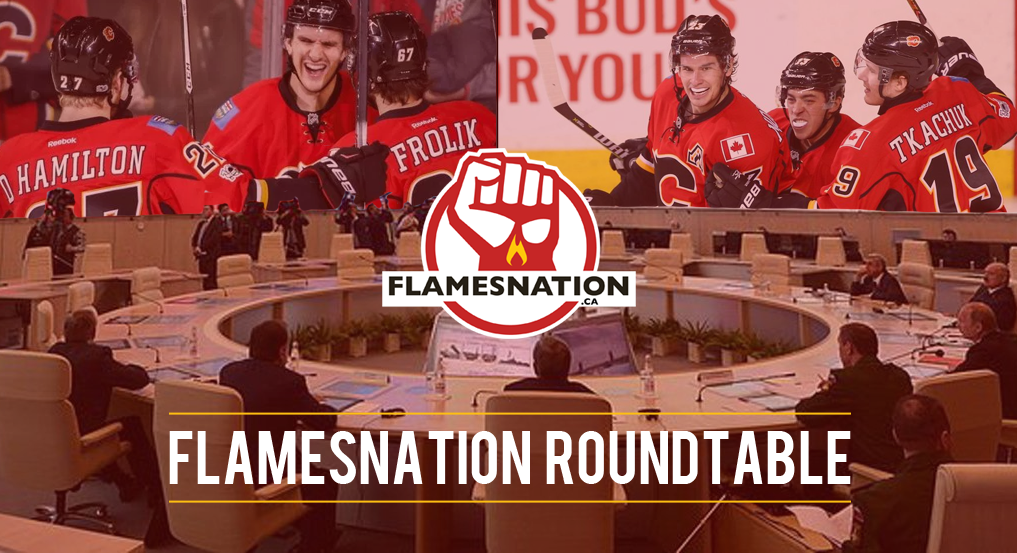 By Ryan Pike
2 years ago
Hockey’s back!
The Calgary Flames open their 2020-21 regular season tonight in Winnipeg! To commemorate the occasion, we’ve convened the FlamesNation writing staff in a roundtable to discuss our hopes, dreams and anxieties for this upcoming season.
Join us, won’t you?

What makes you optimistic about the 2020-21 Flames?

Craig: The budding dynamos on the blueline and in the top nine. Rasmus Andersson and Andrew Mangiapane are primed to continue plowing their way into top roles on the team before they turn 25, Dillon Dube will surely build on his show-stealing summer and Juuso Valimaki might be ready to take the entire country by surprise—and storm.
Mike G: The defense. I think the Flames have a lot of different options to play with on the back-end. Chris Tanev is coming off a couple substandard seasons but I think there’s a decent chance that he rebounds next to a player of Mark Giordano’s calibre. Andersson and Noah Hanifin are going to be very exciting to watch together. And I love the potential of Valimaki, Nikita Nesterov, and Connor Mackey. I think there’s a lot to like and plenty of ways to change things up if needed.
Mike W: The emerging young nucleus is getting me jazzed for 2021 and beyond. The prospect of the full retro Flames being led into the foreseeable future by the likes of Matthew Tkachuk, Mangiapane, Dube, Andersson, and Valimaki is exciting to say the least. If you can count on the big boys to bounce back, the new guys to make a difference, and continued growth from the aforementioned young bucks this year could be a special and hopefully successful crossover of talent.
Prajeya: With the addition of Jacob Markstrom, I firmly believe that they’re a top two goaltending team in the North Division. Montreal’s Carey Price and Jake Allen might have the edge on them, but none-the-less, goaltending will be exponentially more important in a shortened season, with each win being worth so much more. The signings of Josh Leivo, Joakim Nordstrom, and Dominik Simon also provides the team with a ton of flexibility and some much-needed depth, as can be seen by the strength of the bottom six as well as the taxi squad.
Ryan: I really like their forward depth. The additions they’ve made this off-season have given Geoff Ward lineup flexibility he just didn’t have last season. If Ward can be adept at mixing and matching, the Flames can ride the hot offensive hand and get some wins.

Craig: The Flames scored the fewest goals among all Canadian teams last year—the wretched Senators excepted, of course—largely due to dips in scoring from their premier forwards. Now, they are playing dozens of games against scoring powerhouses like the Oilers, Leafs and Canucks, and their other games will demand denting Carey Price and Connor Hellebuyck. A repeat in the goals-for column (from the stars especially) could prove disastrous.
Mike G: It’s always the goaltending. Markstrom has the pedigree but can he perform? He’s certainly being paid in such a way where it would be disastrous if he fails to meet expectations. The Flames can’t afford to carry a failed $6 million AAV contract on their books for the next six years. Thankfully, David Rittich looks to be a capable backup, but he’s not going to be a long-term option—his contract is up at the end of the season. The Flames’ success this year will likely hinge on a single player, Markstrom, more than it has in any season since Jarome Iginla’s time.
Mike W: Of most concern is how the blue line will hold up. Tanev is not what he used to be and is not only injury prone but coming off the worst season of his career. He could rebound but it’s another ‘if’. Factor in the loss of Brodie, hoping Giordano can continue to be elite at age 37, and having to face the deadly offensive power of the Leafs and Oilers for the majority of the season and you have a recipe for sweaty palms and clenched muscles. The defensive success will rely heavily on the play of the young guns in Andersson, Hanifin, and Valimaki. Hopefully it’s not too tall a task.
Prajeya: I’m a little worried about the massive changes that the back end has seen, worried what that’ll do to the teams chemistry and structure. As of now, the blue line looks something like this:
Mark Giordano – Rasmus Andersson
Noah Hanifin – Chris Tanev
Jusso Valimaki – Nikita Nesterov
The departures of TJ Brodie and Travis Hamonic, introduction of Tanev, and exponential elevation of Andersson’s role could be overwhelming changes, which I believe could potentially derail the team.
Ryan: The blueline gets really lean and green behind Giordano and Tanev, who are both north of 30 and have recent injury histories. If Andersson and Hanifin have to carry the defensive workload, the Flames might be in trouble.

Where do the Flames finish in the (Scotia NHL) North Division?

Craig: Third. The gaps between the Canucks, Jets, and Flames last season for third-best Canadian record after Toronto and Edmonton were thinner than razor-sliced onions, but the best winning percentage of the three went to the team whose crease contained Jacob Markstrom. History likes to repeat itself.
Mike G: Second. I think Montreal finishes first, owing largely to their depth up front and a rebound year (no pun intended) from Carey Price. Toronto will finish third; Edmonton, fourth; Vancouver, fifth; Ottawa, sixth; and Winnipeg, last.
Mike W: It’s razor thin. The North is the Leafs’ to lose and we can all agree Ottawa is out of it. Of the remaining clubs the Habs and Flames have the most well rounded rosters. Montreal is deeper up front, which could be a major factor this year, so I’ll give them a slight edge over the good guys in red. Matthew Tkachuk may be king in the (Scotia) North but the Flames will finish the regular season in third spot.
Prajeya: Calgary comes second, with Toronto placing first. The Maple Leafs got their big ticket defenceman in Brodie, and while I’m doubtful that they get very far in the playoffs, I think this could go a long way with their regular season placing.
Ryan: I’m leaning towards second place. I think Toronto has the horses to finish first, and Edmonton and Montreal probably nail down the other two spots. (Oh, and a Calgary vs. Edmonton first round series in May, please.)
Uncategorized
Recent articles from Ryan Pike