Give the Calgary Flames’ top line time to figure it out 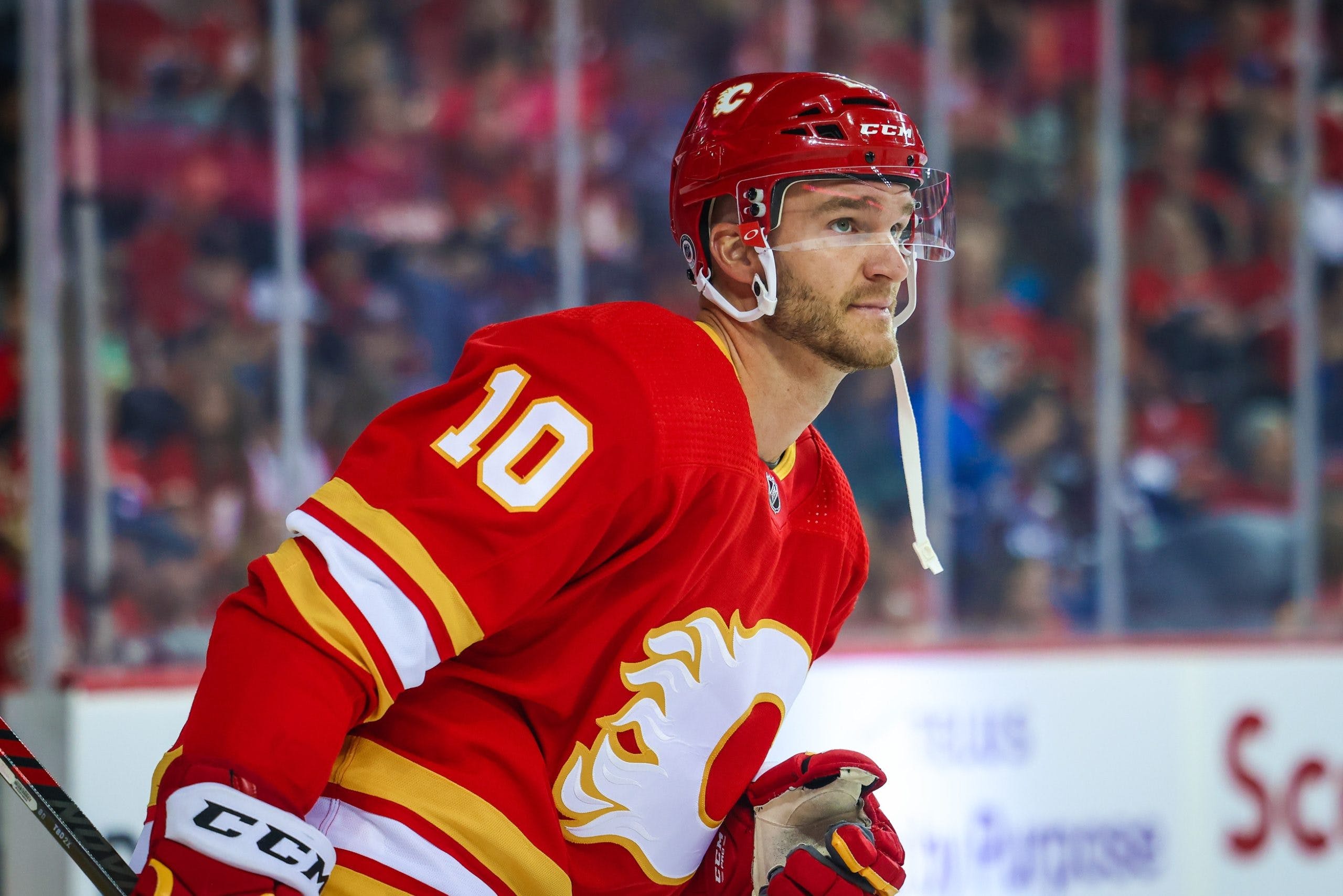 By Pat Steinberg
3 months ago
I think we can all agree the line of Jonathan Huberdeau, Elias Lindholm, and Tyler Toffoli has yet to click at five-on-five. While we’ve seen moments, Calgary’s newly-constructed top trio has mostly been rendered ineffective through the team’s first five games. Despite those struggles, there are plenty of reasons for the Flames to give Lindholm, Huberdeau, and Toffoli more time together.

Including the pre-season, Huberdeau has played a grand total of ten games with his new team. Considering Huberdeau has committed the next nine years of his career to Calgary, I can’t really underscore how small a sample size that is in the grand scheme of things. On and off the ice, it takes time to fully adjust after changing teams, especially knowing Huberdeau had been with Florida for a full decade.
And, focusing on strictly hockey, we’re talking about a significant style adjustment for Huberdeau, too. While the Flames were one of the NHL’s top teams in limiting high danger chances last season, the Panthers finished in the bottom half of the league in that category. Florida also led the league in high danger chances for, which further illustrates the stylistic differences between the two teams.
“Defensively it’s a little different system, (but) it’s still hockey,” Huberdeau admitted on Saturday morning. “We were playing zone in Florida and here it’s man-on-man, so I think it’s just different. Sometimes I kind of get away from it but I think I have to be a little better, you know, following my guy. I think it’s just a little adjustment and it’s going to be fine.”

It’s the only line with no pre-existing chemistry

When comparing to Calgary’s other three forward lines so far, the trio of Toffoli, Huberdeau, and Lindholm are unique in their complete lack of familiarity. When you consider Backlund and Coleman, Mangiapane and Dube, and Lucic and Ritchie, every other forward line has a duo with decent familiarity with one another. That doesn’t exist with the Lindholm group.
Obviously Huberdeau is brand new AND has admitted he’s never been on a line with two right shots before. Lindholm and Toffoli, on the other hand, spent a grand total of 35:18 together at five-on-five last season. And that’s before we consider the fact Lindholm has lost the two players he spent almost every single minute on the ice with last season in Johnny Gaudreau and Matthew Tkachuk.
All this is to say: there’s a lot of learning going on with all three players.

The Flames are 4-1-0 to start the season. A winning record helps a team be more patient when things aren’t necessarily firing on all cylinders. Furthermore, Calgary’s other forward trios have generally been strong to start the season, which also allows for more grace in allowing Toffoli, Lindholm, and Huberdeau to figure it out.
Most of all, we’re talking about three very good players with high hockey IQs. That’s why I feel confident they’ll all figure it out. Huberdeau didn’t just fluke his way to 115 points last season. Lindholm didn’t stumble into being the 2022 Selke Trophy runner-up. And Toffoli isn’t a six-time 20-goal scorer by accident.
I think it’s well worth Calgary’s time to let these three find a way.
Editorials
Recent articles from Pat Steinberg