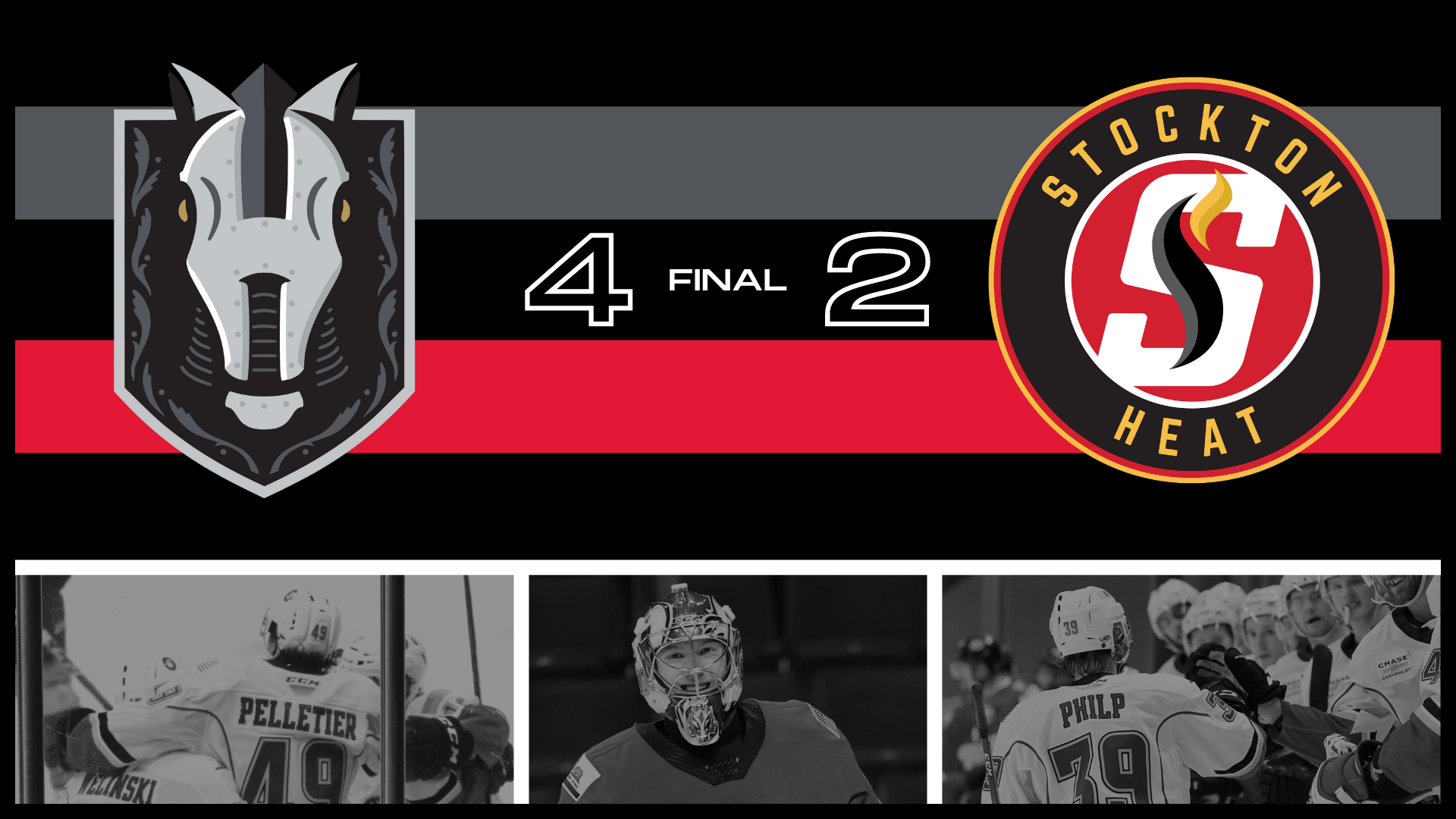 By Paige Siewert
9 months ago
The Stockton Heat had the opportunity to earn a little payback in the Flames organization by playing the Las Vegas Golden Knights’ AHL team after the Flames lost the night prior in a possible playoff-clinching game. Unfortunately, they were unable to get some retribution for their parent club as they fell 4-2 in game two of this three-game series this week.

Stockton looked to get off to an earlier start in this game after battling from behind in their previous game earlier this week. The last time they played the Silver Knights, they did not lead in the game until they scored the game-winning goal in overtime. On Friday, they weren’t trying to make a habit of that style of play and got things started with a goal from Jakob Pelletier on the power play 16:02 into the first period.
Matthew Phillips and Byron Froese picked up assists on this goal. I hope you’re not sick of hearing the word, “milestone,” around this team because this goal also classifies itself as a milestone for Pelletier. This goal was his 27th of the season, tying the Heat rookie goal record held by Mark Jankowski.
Their lead would only hold for about a minute and a half when the Silver Knights answered back and evened up the score going into the first intermission. In the second, Henderson’s scoring continued with two more markers going up on the scoreboard before the end of 40 minutes. The Heat kept scoring quiet through the second period and found themselves down two goals going into the third period.
Henderson tacked one more on halfway through the third on a power play. Both teams’ power play went one for five on the night. Dustin Wolf was in the net for this game but it wasn’t sloppy play by the Heat’s top goaltender causing such a stretch of goals.
The Silver Knights play a hard and fast game up by the net and if you’re not covering your skater, you can leave your goalie out to dry. Their goals took a second to react to because of how quick they picked off passes and attacked rebounds to catch Dustin Wolf behind their play by half a second.
Even up 4-1 halfway through the third, this game wasn’t over yet. The Heat made a strong push towards the end to try and get some scoring and were only able to increase their goal count by one with a shorthanded goal from Justin Kirkland.
The third period brought out some rough stuff but nothing quite enough to draw a fighting major. 14 minutes of roughing minors were dealt out between the two teams in the last frame. The Heat made their best effort to completely close the gap but the two goal separation was too much for them to earn back in the time they had remaining.
The Silver Knights took the second game of this week’s series with a 4-2 win. They also held the advantage in shots out-shooting the Heat 38-29.

For how successful the Heat have been this season it is hard to believe they have any difficulty against teams in their division. The Silver Knights have been a different beast for them, however. They have only won three of their seven games so far and have now played themselves out of a possible season series win. They have one more shot to even up their record and after that, they will only have a handful of games to play before the regular season comes to a close.
The Heat have not even won in back to back games against the Silver Knights. Statistically, the Heat have quite an advantage over the Silver Knights as the Heat are placed first in the Pacific Division and the Silver Knights sit at sixth. In league standings, Stockton still sits at the top with Henderson being way down at 21st. Not quite the gap you would expect against two teams that have gone back and forth this season as much as these two.

Stockton’s shot to tie the season series will come Saturday evening for their third game in four nights. They’ll stick around in Henderson to get one last regular-season shot at these guys. Puck drop is set for 5:00 p.m. MT.