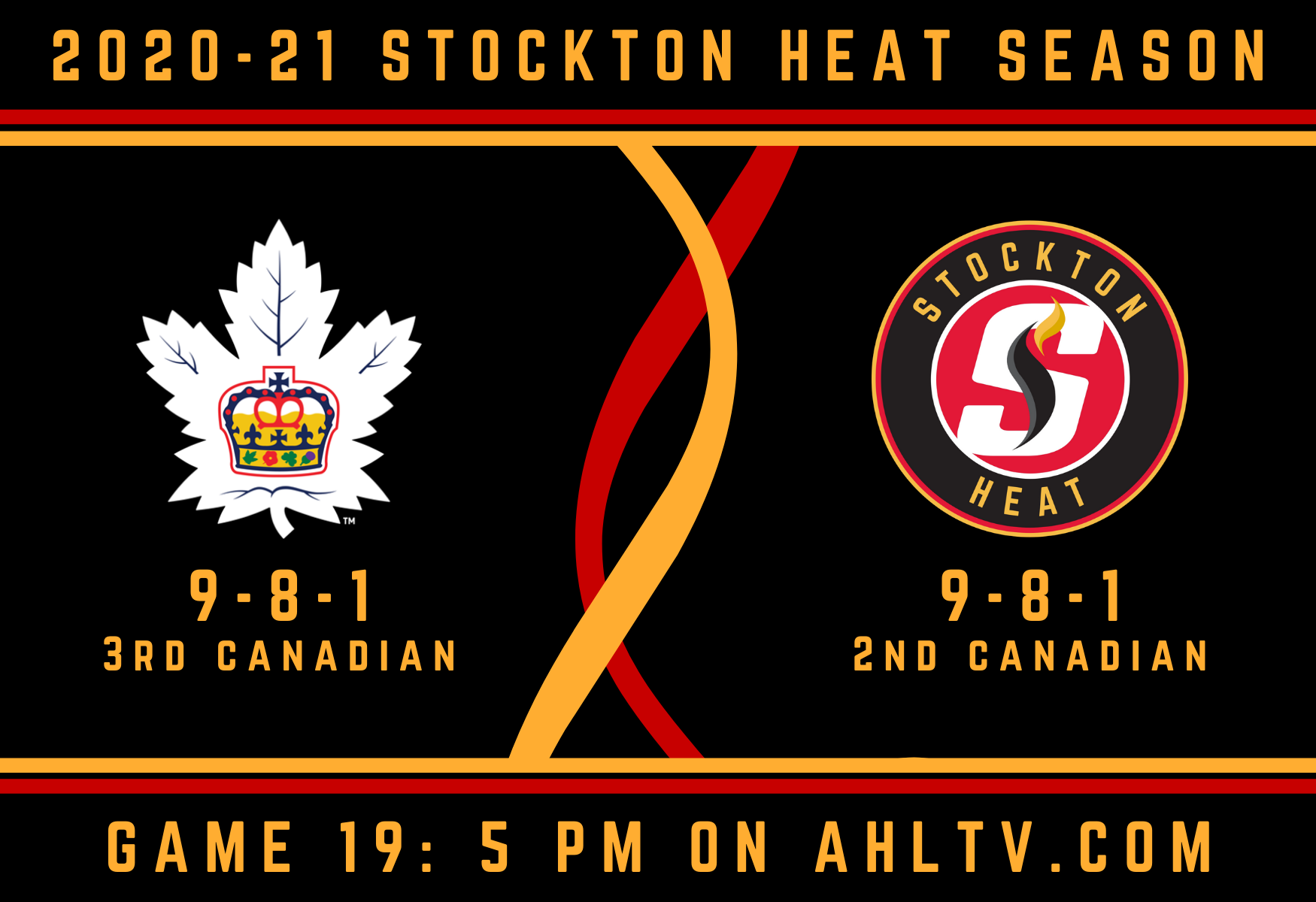 By Mike Gould
1 year ago
If the 2020-21 Stockton Heat season was broken into six segments of equal size, Wednesday’s game against the Toronto Marlies would represent the penultimate contest of the fourth five-game block.
The Heat have had a wildly inconsistent season, the varying quality of which becomes obvious when looking at the team’s record in its successive segments:
Segment 1 — 3-2-0
Segment 2 — 5-0-0
Segment 3 — 0-4-1
Segment 4 (incomplete) — 1-2-0
Despite having lost seven of its last eight games, Stockton has an opportunity to close out another winning segment with victories over the Toronto Marlies on Wednesday and the Laval Rocket on Friday.
Defenseman Connor Mackey has been Stockton’s best player since the team hit the road to kick off its fourth segment. He has five points (two goals, three assists) and 12 shots on goal over the last three games and was a plus-five in Stockton’s 7-1 win over the Belleville Senators on Mar. 27.
The Heat have won four of their seven meetings with the Marlies this season but fell in their most recent match-up. Nic Petan, Timothy Liljegren, Tyler Gaudet, and Adam Brooks all scored for Toronto on Mar. 29 en route to a tightly-contested 4-3 Marlies win.

Stockton — Giorgio Estephan. At this point, Estephan’s consistent production is starting to look like it might be for real. The 24-year-old winger now has six points in seven games with the Heat this season despite frequently being a healthy scratch.
On Mar. 20 (after a game where Estephan did not play), Heat coach Cail MacLean described Estephan as a player who best fits into the lineup when the coaching staff needs an additional player who can thrive in a skill-based environment:
“It’s about finding guys that fit into the right roles,” said MacLean. “With the addition of some guys—with Froese coming into the picture—it sort of changes what we have available in a role that’s going to suit Giorgio’s game.
“I think Giorgio’s ready to go. We’re working with him and, when he gets his opportunity, I know he’s going to be really hungry for it. We think he can work well in a position where—for example, Kris Bennett’s an “energy guy.” Giorgio’s more of a “skill guy.” He makes plays, he’s a high-scoring player at the ECHL level and I think he can do some damage at this level, too,” MacLean added.
Estephan has played in four of Stockton’s six games since MacLean made these remarks. He has three points in his last two contests.
Toronto — Semyon Der-Arguchintsev. “SDA” looked like he belonged in his first AHL game, setting up Brooks’ game-winning goal in Toronto’s 4-3 victory on Monday. The 20-year-old right-shooting Russian lacks size but makes up for it with terrific speed and skill.
The Maple Leafs selected Der-Arguchintsev in the third round of the 2018 Draft. He spent four full seasons in the Ontario Hockey League with the Peterborough Petes, consistently ranking among the league’s offensive leaders for his age group.
After the end of the 2018-19 OHL season, Der-Arguchintsev joined the ECHL’s Newfoundland Growlers in time to help them win the Kelly Cup. He played in three regular season games and nine more during the playoffs, scoring two goals and four points in his 12 total contests.