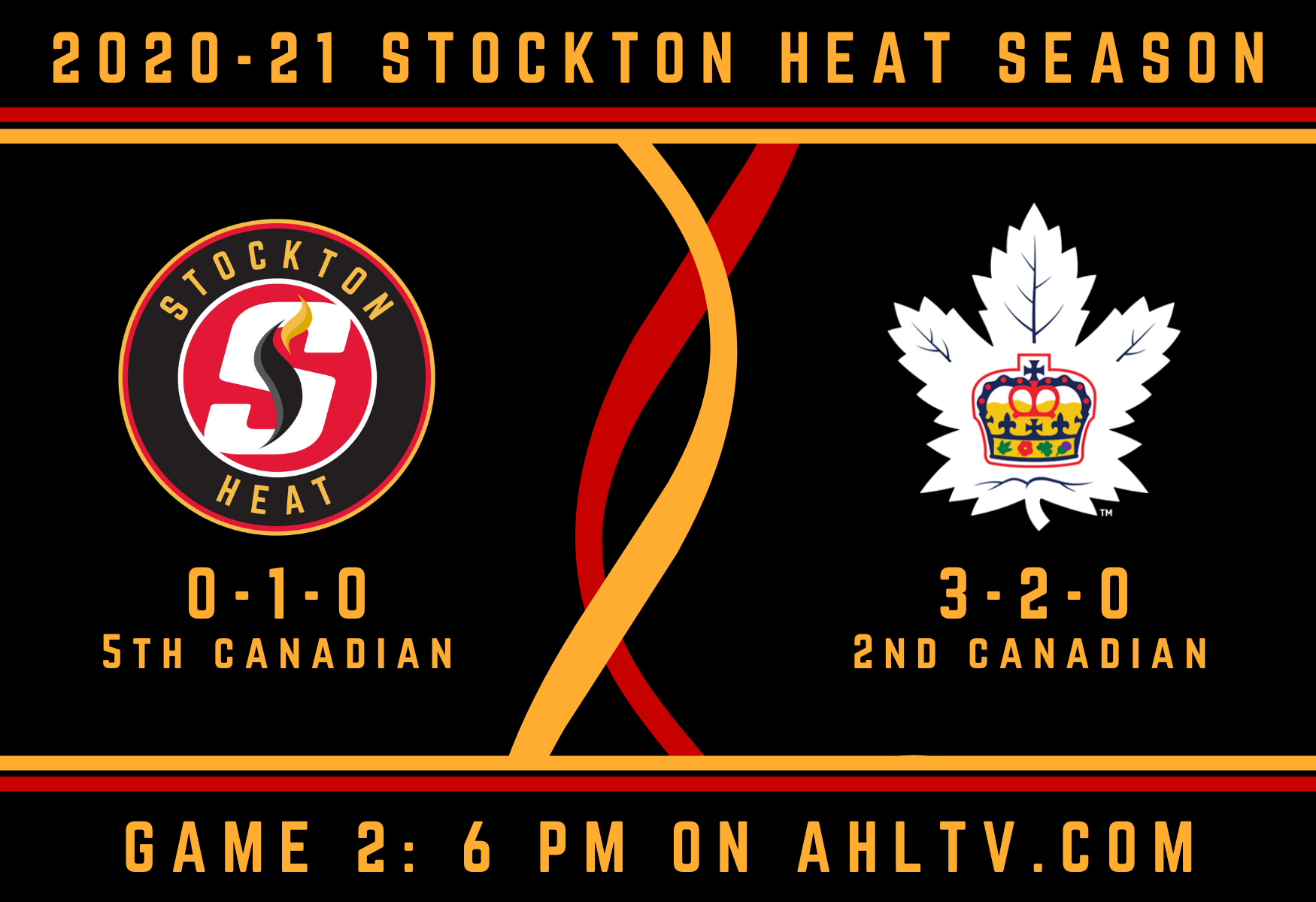 Photo credit:Graphic by Mike Gould. All logos the property of their respective teams.

By Mike Gould
1 year ago
The Stockton Heat are back in action today and will look to rebound after a lopsided opening-day loss to the Toronto Marlies on Sunday.
Despite falling 7-1 to the Marlies two days ago, the Heat out-shot their opponents by a count of 32-30 and are coming off a year in which they finished five points ahead of Toronto in the AHL standings in six fewer games.
Now, the Heat (0-1-0) have some catching up to do. The Marlies (3-2-0) sit in second in the AHL’s Canadian Division and already have five times as much game experience as Stockton/Calgary does in 2020-21.
Boasting Tyler Gaudet, Kenny Agostino, Adam Brooks, Nick Robertson, and Joey Anderson—all of whom have NHL experience—up front, the Marlies are a deep and dangerous team. Through five games, they have scored 19 goals while allowing just 11.
Goaltender Andrew D’Agostini was phenomenal for Toronto on Sunday, stopping 31 of 32 shots. D’Agostini has started each of the Marlies’ five games this season and, with these two teams also scheduled to play tomorrow, it’s possible he could sit tonight in favour of backup Kai Edmonds. The 20-year-old Edmonds spent the last three seasons in the Ontario Hockey League with the Barrie Colts and Mississauga Steelheads.
Luke Philp has the only goal for the Heat to this point in the season, scoring in the third period on Sunday to cut the Marlies’ lead to 7-1. Since the start of the 2019-20 season, Philp leads all Heat players with 20 goals in 53 games.
Martin Pospisil, the Flames’ fourth-round pick in 2018, assisted on Philp’s goal and now owns a four-game point streak dating back to the end of the 2019-20 season.
It is unclear who will get the start in goal today for the Heat. Top Flames prospect Dustin Wolf received the nod on Sunday but allowed five goals on 11 shots before being relieved by former Marlie Garret Sparks.

Stockton — Alex Petrovic. The 28-year-old right-handed defenseman will play in his 200th American Hockey League game tonight; he has skated for the San Antonio Rampage, the Providence Bruins, and the Heat. Petrovic began Sunday’s game on a pairing with Connor Mackey.
Toronto — Timothy Liljegren. The Maple Leafs selected Liljegren 17th overall in 2017, one pick after Juuso Valimaki went to Calgary. Liljegren has 11 NHL contests to his name and is off to a good start with the Marlies this year, recording five points (all assists) in five games. Will he record his first goal of the season tonight?

This game is being broadcast on AHLTV.com (subscription required). Puck-drop will be at 6:00 p.m. MT. Live game updates can be found on Twitter at @miketgould and @theheatbeat, or online at TheAHL.com.
Uncategorized
Recent articles from Mike Gould