HGD 8: Kicking off a quartet of games against Manitoba (5pm MT, AHL TV) 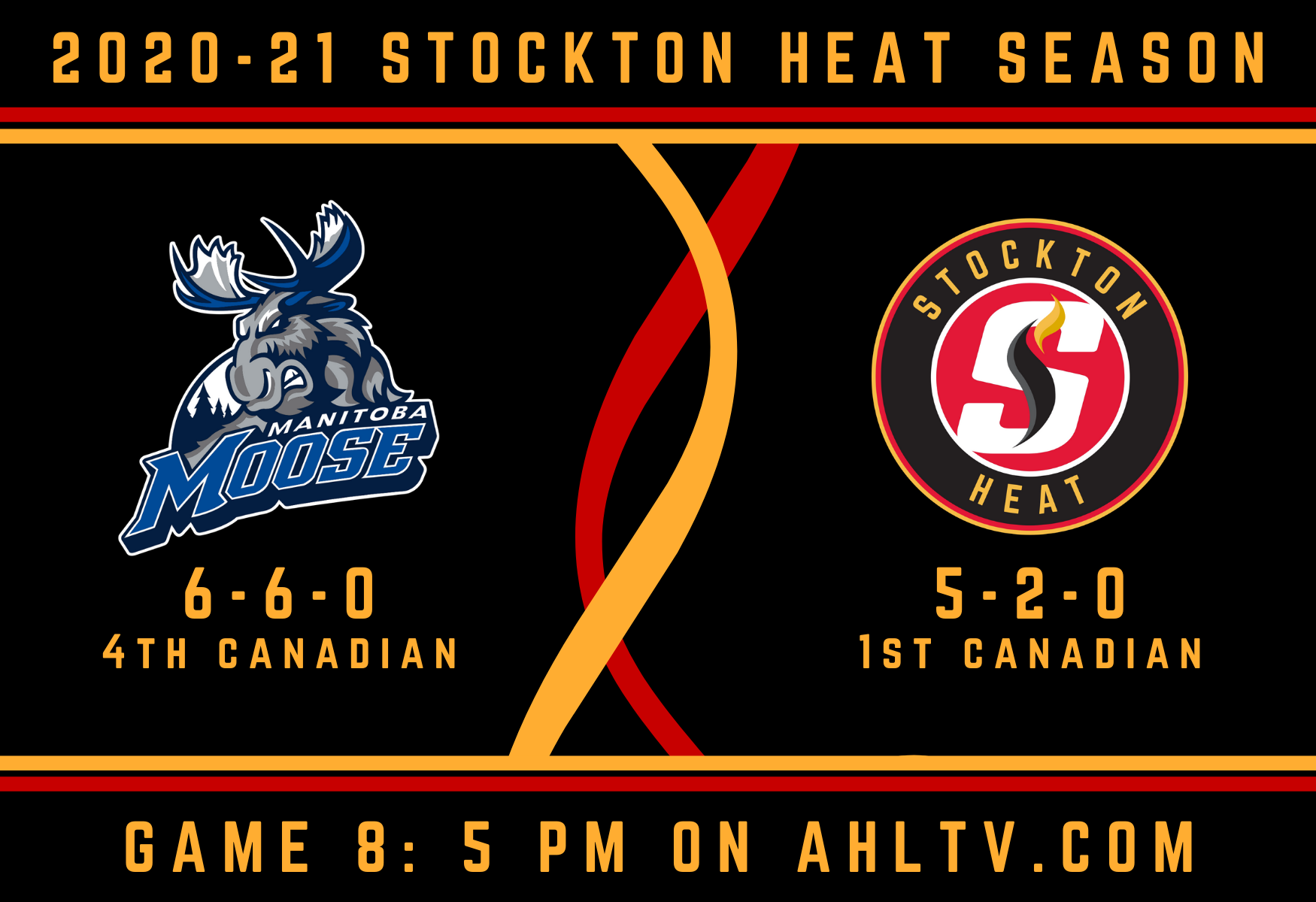 By Mike Gould
1 year ago
Seven games into their 2020-21 season, the Stockton Heat have played against the Belleville Senators once and the Toronto Marlies the other six times. Talk about variety!
Monday’s Heat game, against the Manitoba Moose, represents the beginning of a new test for the team. They sit atop the AHL’s Canadian Division with a 5-2-0 record but still have yet to face off against two of their divisional opponents.
By the end of this week, the Heat will undeniably be very familiar with what the Moose have to offer. These two teams will play each other four times in the next six days, including back-to-back games on Mar. 10 and 11.
Manitoba has had a solid start to the 2020-21 campaign, going 6-6-0 through 12 games and receiving strong goaltending performances from Winnipeg Jets prospect Mikhail Berdin. The 23-year-old Russian netminder, selected 157th by Winnipeg in the 2016 Draft, sits at 6-5-0 on the year with a .919 save percentage.
Connor Zary has starred for the Heat just months after being selected by the Calgary Flames in the first round of the 2020 Draft. Similarly, recent 10th overall pick Cole Perfetti has received top-six deployment with the Moose and has six points in his first 12 AHL games. Not bad for a 2002-born player making his professional debut two years ahead of time.
The Heat enter this game riding a five-game winning streak which dates back to their nail-biting 4-2 win over Toronto on Feb. 24. The Marlies threatened to end Stockton’s run on Saturday, gaining a 3-2 lead early in the third period off goals from Alex Galchenyuk and Teemu Kivihalme.
But Heat defensemen Zac Leslie and Alex Petrovic both scored with less than 2:30 to play in regulation, sealing yet another huge win for the Flames’ farm team. Based on points percentage, the 5-2-0 Heat barely rank ahead of the 5-2-1 Laval Rocket in the AHL’s divisional standings.
Manitoba started the season 4-6-0 but has won its last two games, both over Belleville, by a combined 9-3 score. 25-year-old forward Cole Maier scored two goals, including the game-winner, over the B-Sens in Saturday’s 3-1 win.
The Heat used these lines in their comeback victory over the Marlies on Mar. 6:
Connor Zary – Adam Ruzicka – Matthew Phillips
Justin Kirkland – Glenn Gawdin – Luke Philp
Emilio Pettersen – Martin Pospisil – Dmitry Zavgorodniy
Alex Gallant* – Mark Simpson – Eetu Tuulola
Connor Mackey – Alex Petrovic
Colton Poolman – Alexander Yelesin
CJ Lerby – Zac Leslie
Garret Sparks
Hayden Lavigne
*Gallant left the first period of Stockton’s last game with an injury and is considered day-to-day.
Meanwhile, the Moose deployed these combinations on Saturday:
Jeff Malott – David Gustafsson – Nathan Todd
CJ Suess – Cole Perfetti – Haralds Egle
Skyler McKenzie – Cole Maier – Nick Jones
Wes Michaud – Bobby Lynch
Ville Heinola – Jimmy Oligny
Dylan Samberg – Leon Gawanke
Declan Chisholm – Jonathan Kovacevik
Hayden Shaw
Mikhail Berdin
Arturs Silovs

Stockton — Dmitry Zavgorodniy. The right-handed Russian winger has yet to record his first AHL point through seven games this season. “Little Z” stands just 5’9″ tall but weighs in at 173 pounds and is coming off a very successful three-year career in the Quebec Major Junior Hockey League with the Rimouski Océanic. In the Q, Zavgorodniy often played on a line with Alexis Lafrenière. With all due respect, his new linemates—Martin Pospisil and Emilio Pettersen—have a little less upside than the first pick in the 2020 Draft. Still, Pettersen and Pospisil have both started to produce, and Zavgorodniy hasn’t looked out-of-place on that line. The points will come.
Manitoba — David Gustafsson. The Jets selected Gustafsson with the 60th pick in the 2018 Draft. He’s a 6’2″ centre with good two-way acumen and a pass-first mentality. Through 15 AHL games, Gustafsson has seven assists but only 17 shots and two goals. Gustafsson spent 22 games with the Jets last year as a 19-year-old and has already played four NHL games this year; he has just one NHL point, a goal, to his name. Monday’s contest will be Gustafsson’s third AHL game of the year, having skated between first-year pro Jeff Malott and sharpshooter Nathan Todd on Manitoba’s top line in Saturday’s win. With that sort of deployment, he’ll likely continue to be primarily relied upon as a playmaker.

This game will be broadcast on AHLTV.com (subscription required), with the opening puck-drop going at 5:00 p.m. MT. Live game updates can be found on Twitter at @miketgould and @theheatbeat, or online at TheAHL.com.
Uncategorized
Recent articles from Mike Gould