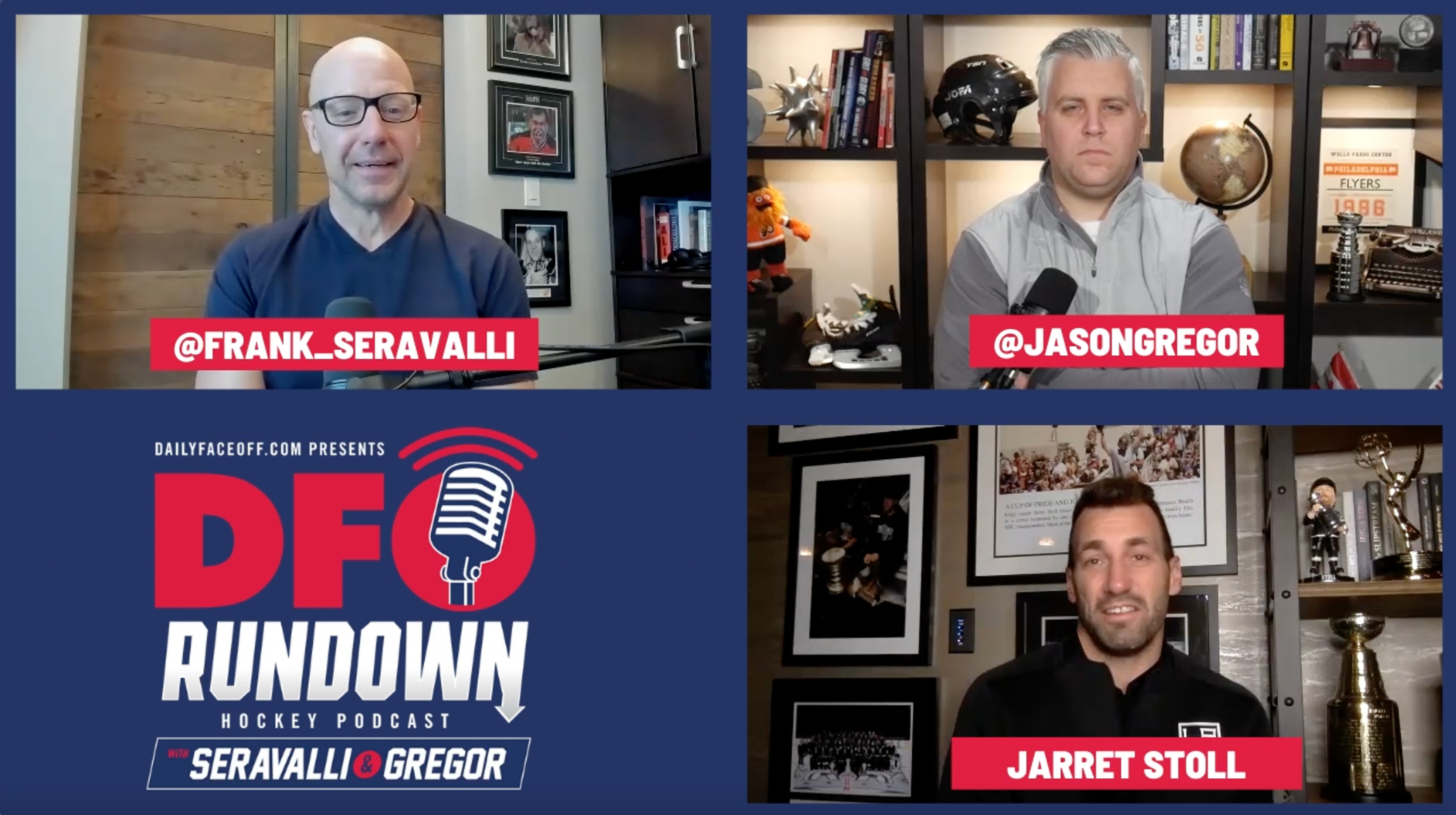 By Zach Laing
1 year ago
If there’s one player who isn’t on the Calgary Flames that knows Darryl Sutter well, it’s two-time Stanley Cup Champion Jarrett Stoll.
He played for the Kings for seven years and under Sutter’s tutelage there for four. In two of those seasons, Sutter won cups with the Kings.
Stoll joined the DFO Rundown’s Jason Gregor and Frank Seravalli on Monday, where he spoke about what it was like under Sutter in L.A., and what the Flames and their fans can expect from him.
Here’s an excerpt from the show:

Well, Daryl, for me, was very I guess personable is the first thing that comes to mind. He was very yeah, it was a hard coach to play for, but like, who wouldn’t want a coach to take pride in his job, take pride in winning. All the coach wants to do is win. All players should want to do is win and he made that possible for all of us. He makes everybody around the team just feel so much importance within the team, giving everybody a role. My first day, I remember my first day not meeting Darryl, but him being with the Kings in the hallway and he just had a talk with pretty much every guy just relaying how important they’re going to be to this team. I walked away feeling like, “Oh, man, I’m ready to go. Let’s get out there and play a game.” I knew exactly where I stood. I knew what my role was. My role changed a little bit when Darryl came in. I was fine with it. You just you just run with it. And everybody felt the same. Everybody felt like they had a real importance, a real role, a job to do on the team. And Darryl cared. He cared so much.
Maybe that’s something that people just see the the better beer face behind the bench and how the story is, how hard it is to play for and demanding and yeah, he is. But  he cares so much and he almost treats you like his own son. I’ve never had a coach care as much about a player and about the team as as Darryl. He did things differently, sometimes it’s very black and white. Everything was was spelled out for you. But hey, his teams win and we won because of it. And I’ll never have a bad thing to say about Darryl ever.
What style does Sutter like to play?
Just hard be hard to play against our teams in L.A. When we were playing well and winning three or four years there, where I think most people would say this when they come into L.A., they came in L.A., they knew they’re in a battle. They do is going to be hard to win. They probably knew it was going to be a low scoring game, physically tough.
And that’s why in a seven game series, Darryl Sutter coached team in a seven game series. It’s it’s going to be tough. You’ve got to beat you’ve got to beat him four times and we’re down three-nothing to San Jose. And I remember Darryl’s quotes were after the game as “we’re going to be hard out.” That’s all he said. “We’re going to be a tough vote.” And and that’s just the way he coaches. He wants everybody to play the same way, whether you’re Anze Kopitar or whoever. It’s you’ve got to play hard every single shift or you’re not going to play. It doesn’t matter. You’re not going to play it if you don’t deserve to. So that’s that’s pretty much what I could say about Darryl’s coaching.

You can listen to the full podcast below.
Zach Laing is the Nation Network’s news director and senior columnist. He can be followed on Twitter at @zjlaing, or reached by email at zach@oilersnation.com.
Uncategorized
Recent articles from Zach Laing