By Mike W
1 year ago
Another day, another regulation loss for the Calgary Flames. They played okay last night. They had the puck a lot and made a push late. But, okay isn’t close to good enough right now. The predictable and perimeter brand of hockey this club keeps rolling out may as well be trademarked at this point. Scoring twice seems like an offensive outburst.
They’ll need to change the “million dollar score and win challenge” to the “million dollar get a scoring chance and win challenge” soon.
The coach’s descriptor of “dopey”, in reference to the start, certainly felt apt through 20 minutes last night. Again, despite the score the Flames were hardly able to generate anything substantial in terms of scoring chances against a Jets team who’s weakness is a leaky blue line and team defence.
In fact, only the Vancouver Canucks have allowed more high danger chances against this season at 5v5 than Winnipeg and per 60 minutes, no team allows more high danger chances than those same Jets.
Despite this, the Flames could hardly muster any offence last night making things pretty easy for Hellebuyck and company.
(5v5 Data from Natural Stat Trick) (Heat map from Natural Stat Trick)
The Flames are 1-14-1 when trailing after two periods and 4-14-1 when scored upon first. They pushed back a bit and chipped away at the Jets lead but still: too much perimeter play and very few pucks being taken to dangerous areas. It’s not a recipe to score goals and win games. They need to play faster, be more dangerous, and be willing to take the puck to the highly contested areas.
Lowest event hockey I’ve seen a while.
The series of unfortunate events that led to the Flames being down two men after clawing back into the game really epitomized the season thus far. I don’t want go to far down the officiating rabbit hole but it probably not a game they are showing as an exemplar of perfect refereeing. It’s tough to see Lucic take those penalties but it’s also tough to see some of the other shenanigans go uncalled.

I was happy to see the return of the bubble lines but it didn’t really lead to much. The Gaudreau line struggled all night and couldn’t generate much of anything. A few nitpicks with that trio: Lindholm needs to get that puck deep on the Connor goal and Gaudreau needs to stop swinging wildly at pucks with one hand and actually try to engage on the wall.
I liked what the Bennett line did – they created some decent pressure and zone time. The 3M line were the leaders at 5v5, generating three high danger chances and mostly controlling play.
I wish Jacob Markstrom would cool it on the extracurricular activities but he was hardly to blame for this loss. Sure, a really tough mental mistake but he was still fine and had to face some quality scoring chances. Again, if the Flames aren’t asleep half the night and able to generate some offence, you wouldn’t even be in that situation late in the game.
(Line data from MoneyPuck)

Since Sutter took over the Flames are 25th league wide in expected goals per 60 minutes. They are not creating quality scoring chances 5v5. Combine that with a limp power play and you’ll find it’s hard to win a lot of games.
The shots and chances the have been generating have not been from the slot or in tight; it’s all from the outside. 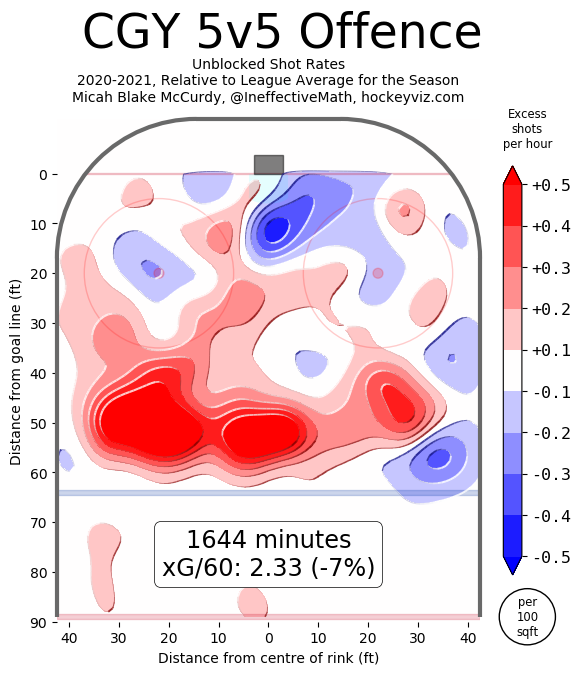 (HockeyViz)
When asked about the lack of scoring after the game last night Sutter had this to say:

Move faster. Play faster. We saw them do this for a measly three games when Darryl first took over. It looked good. We were impressed. Do that again, please.
The lack of rush offence has been a huge problem for this team this year.
In fact they are the worst at engineering goals off the rush in the North division. As per JFresh Hockey the rush attack is cutting both ways right now. Not only can the Flames not create off the attack they are getting killed by the opposition’s quick strike offence. 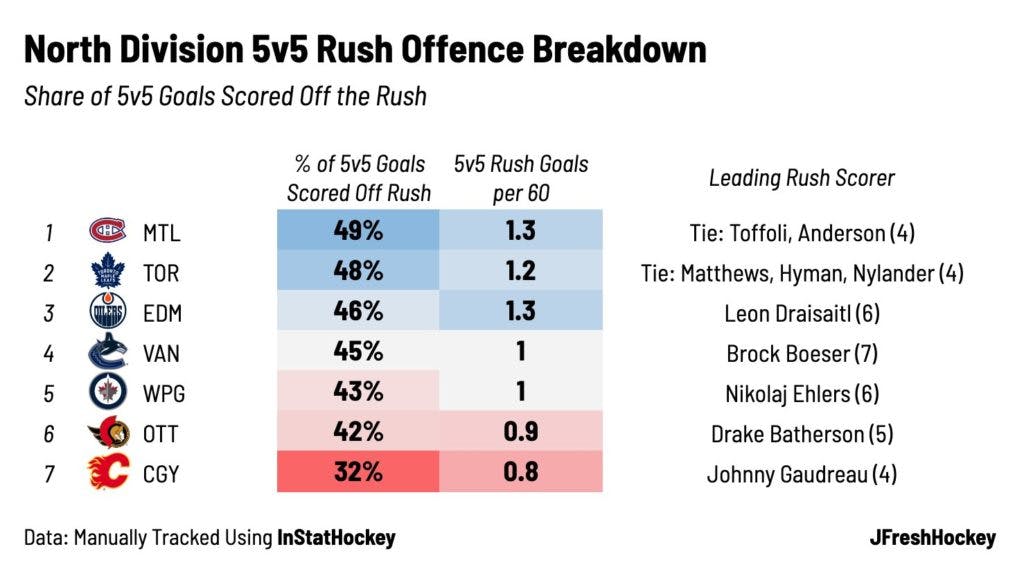 (courtesy JFresh Hockey)
If the Flames are going to have any chance to, at the very least, not be in the same company as Ottawa, they need to increase the pace and shore up the execution in transition.
Since Sutter took over in earnest Gaudreau, Monahan, and Tkachuk each have a single 5v5 goal for and a combined five points.
No team can have so little 5v5 contributions from the top six and see much success.
As the playoffs become a pipe dream we can only hope we start to see some groundwork laid for future success.
I’m sick of the Jets.
Uncategorized
Recent articles from Mike W