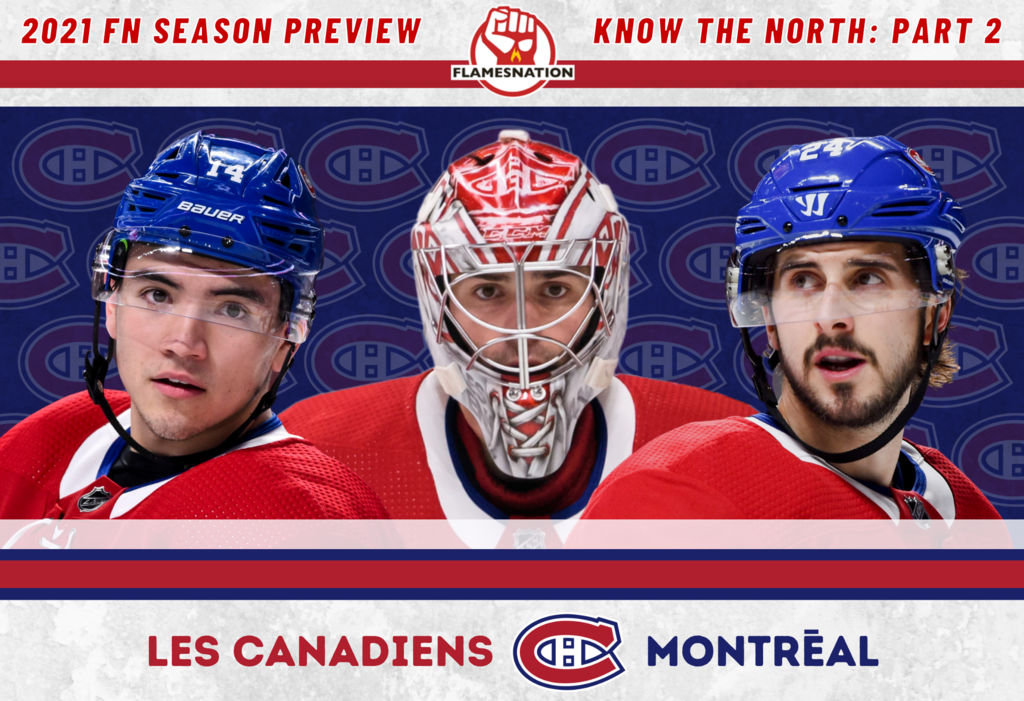 By Mike W
1 year ago
Marc Bergevin spent as much time on the phone this off-season making moves as he did in the gym. The GM voted most likely to deadlift more than you ever could dream of was very busy following a poor season by his club in 2019-20. While they did manage to catch the Pens’ sleeping in the play-in round and gave Philly some trouble the Habs brass weren’t content to sit idly by.

2019-20: 31-31-9 (5th Atlantic, 12th Eastern)
Captain: Shea Weber
Coach: Claude Julien
GM: Marc Bergevin
Key Additions: F Josh Anderson, F Tyler Toffoli, G Jake Allen, D Joel Edmundson, F Corey Perry, F Michael Frolik
Key Departures: F Max Domi, F Nate Thompson
Le Bleu-Blanc-Rouge shipped out Max Domi for Josh Anderson and promptly threw a mind-blowing seven-year deal to the chippy winger that will net him a cool $38.5 million. Among other moves, they gobbled up sniper Tyler Toffoli, shored up their tandem in net with Jake Allen and, just for the sake of it, ensured the Flames face the prospect of seeing Corey Perry’s ugly mug nine times this year.
Let’s start up front. I’m not sure the Domi for Anderson swap is a win on paper for the Habs but regardless they have a ton of depth in the forward ranks. The top line of Tomas Tatar, Phillip Danualt, and Brendan Gallagher was one of the most effective 5v5 lines league-wide last season (although a potential Mangiapane, Lindholm, Tkachuk unit may give them a run for their money this year). Moneypuck’s model had them as the top play driving trio in the league in 2019-20 (minimum 300 minutes played).

The additions of Anderson and Toffoli give them a bevy of riches on the RW. Toffoli is a volume shooter and drives play much the same as Gallagher and will fit in beautifully in the middle six. Eric Engels of Sportsnet explains:

It will be interesting to see how Anderson fares and, with the addition of Corey Perry, it’s very evident Bergevin is subscribing to the ‘needing to be harder to play against’ hypothesis. Despite what you think of Anderson’s offensive production and play driving, the dude is a pain in the neck in the offensive zone. He throws his weight around and forechecks like crazy. If he can refind his goal-scoring touch the Habs top nine could be pretty excellent. 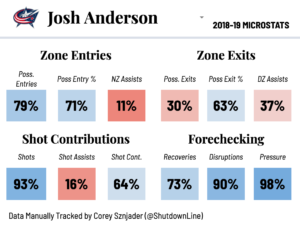 (Source: JFresh)
The additions of Frolik and Lord Voldemort, excuse me, Corey Perry, make it clear they are eyeing a playoff run.
Youngsters Nick Suzuki and Jesperi Kotkaniemi looked ready for prime time in the Return to Play. Guys like Paul Byron and Joel Armia round out a pretty nice forward group who can motor and play in their own end with competence. They still seem to lack the star power upfront but if Anderson and Toffoli live up to expectations and can boost their offensive results they are a well-rounded unit of 12.
On the back end, I’m not crazy about the Edmundson signing and can’t imagine he does much to shore up the blueline. Shea Weber is still doing Shea Weber things and the Habs rely on him heavily. He was still an offensive force last season while retaining a strong physical defensive presence and he and partner Ben Chariot were solid 5v5 last year suppressing shots and quality chances. The pair posted a 55.32 CF% and 54.36 xGF% in 680 minutes last year. 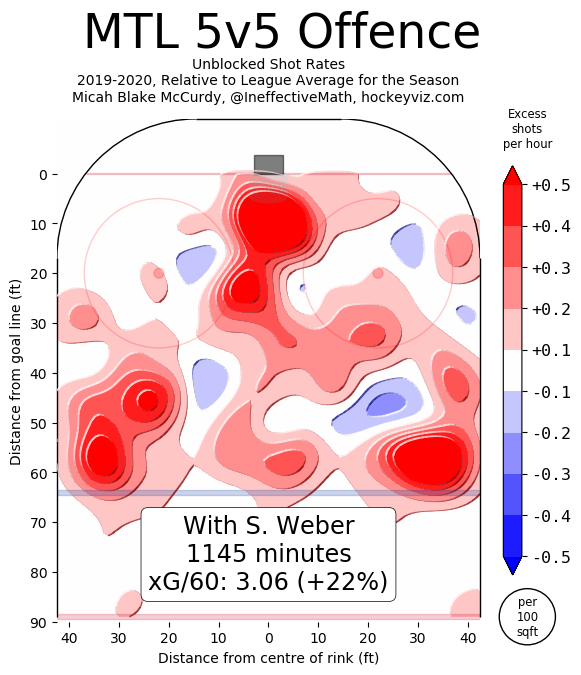 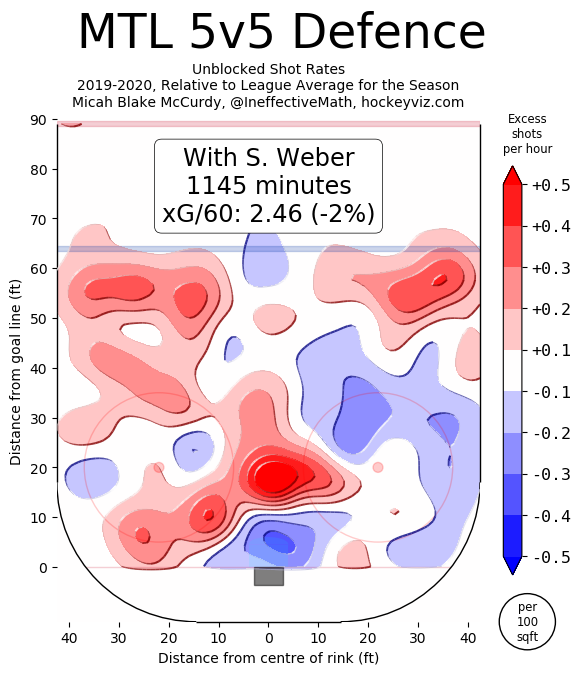 Petry is still elite (thanks Edmonton!) and Brett Kulak is a mobile and serviceable middle pairing defender (thanks Calgary!) despite some rough patches last year. The two put up even stronger 5v5 possession metrics than Weber and Chiarot. Victor Mete or Alex Romanov both look like they can handle a full-time role as well.
Engels on their blueline:

Size and physicality are the calling cards of this crew, but there’s enough offence, speed and puck-moving ability in this mix to turn what was a perceived weakness into a strength. This defence should be markedly better than it was last season.

Something that will need to improve is the power play. They’ve had some strong even-strength numbers and results but for the past few years their power play has straight-up sucked.
Perhaps Toffoli helps but they need to get their man advantage figured out. 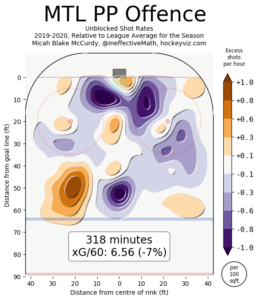 In goal Carey Price reminded us of his pedigree in the bubble and he finally has a backup who can help him out. The Jake Allen trade is a sneaky good acquisition by Bergevin as the Habs get a legitimate goalie who isn’t a liability when Price needs rest (although his AAV is a bit steep).
I spoke with Kevin Woodley of In Goal Magazine and he expects a strong showing from Price as well:

Going into the playoff bubble I read a lot of pushback about Price still being a difference maker from people pointing out how long it had been since his Hart/Vezina season, but the reality is just two seasons ago he was second only to Vasilevskiy in goals saved above expected, according to Clear Sight Analytics, so I wasn’t buying into the “best days well behind him” argument. We saw what a rested — and noticeably more aggressive, assertive — Price can do in the bubble and I like that Montreal finally took steps to make sure he can stay that way with the addition of Jake Allen.

Woodley also spoke to the Habs defensive structure in the North division specifically:

I also like that the Canadiens defend against the types of plays that matter most to goalies better than anyone else in the North division, which actually isn’t saying much relative to rest of NHL but they don’t have to play the rest of the NHL in the regular season. So, add it all up and I expect him to be back in the conversation as one of the top goalies in the NHL. Maybe not Hart and Vezina again but firmly in the top-5.

So will the Canadiens be as strong as they appear on paper? Expectations are high after a busy off-season. Perhaps some moves make you scratch your head (Edmundson acquisition, Anderson contract) but they are an undeniably deeper and stronger hockey club. Bergevin has certainly committed a lot of dough and risk to this roster. Anderson will need to stay healthy and rebound and the forwards will need to turn their strong underlying numbers into actual results as well. Suzuki and Kotkaniemi will need to live up to the billing as well.
And, let’s face it: if Carey Price is the Carey Price from the bubble, all bets are off.
Speaking of Odds, our friends at OddsShark.com have the odds of the Montreal Canadiens winning the North division as high as +415 and as low as +650
Projected Lineup:
Projected Taxi Squad:
Uncategorized
Recent articles from Mike W