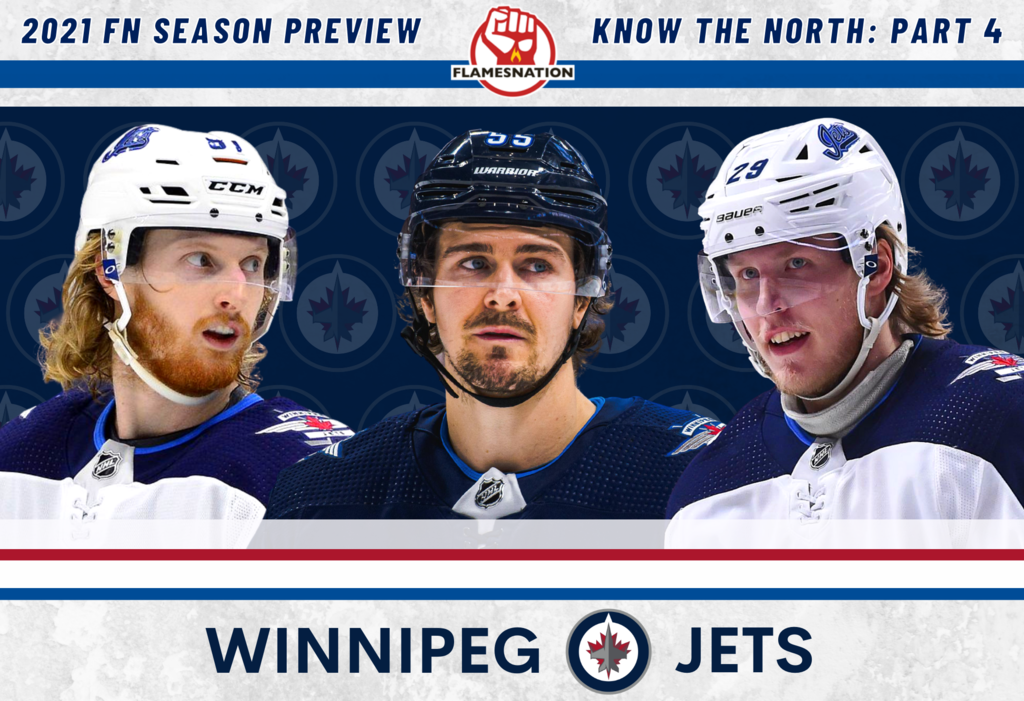 By Prajeya Parmar
1 year ago
The next Canadian team that we’ll be analyzing in our “Know the North” series is the Winnipeg Jets, a team located in a dark and cold city with terrible Wi-Fi. Following a season filled with player controversy, the Jets eventually succumbed to the Calgary Flames during the 2019-20 play-in round. Following a quiet off-season, highlighted by the trade that brought back Paul Statsny and drafting a stud in Cole Perfetti, the Jets continue to have a glaring hole in their lineup heading into the 2020-21 NHL season.

2019-20: 37-28-6 (4th Central, 9th Western)
Captain: Blake Wheeler
Coach: Paul Maurice
General Manager: Kevin Cheveldayoff
Key Additions: F Paul Statsny, F Nate Thompson, F Cole Perfetti, F Trevor Lewis (PTO), D Derek Forbort,
Key Departures: F Cody Eakin, F Mark Letestu, D Carl Dahlström, D Dmitry Kulikov, D Anthony Bitetto
—
In a surprisingly low key off-season, the Winnipeg Jets brought back a familiar face in Paul Statsny at the expense of a young defensemen in Carl Dahlström and a conditional fourth-round pick in the 2022 NHL Draft. With one year left on his $19.5 million contract (average annual value $6.5 million), Statsny’s high end play and exciting chemistry with Nikolaj Ehlers and Patrik Laine provides the Jets with an elite top-six. With that being said, the centreman very recently turned 35, with his PPG of 0.53 during the 2019-20 season being the lowest it has ever been in the Quebec City natives 15-season NHL career. It’ll be interesting to see if age becomes a greater concern during the 2020-21 season, or if Statsny can pick up where he left off in Winnipeg.
The Jets were also able to get a dynamic forward prospect in Cole Perfetti, who slid a few spots in the 2020 NHL Draft. While Perfetti had an excellent draft year and World Juniors, the Whitby, Ontario, native will likely suit up for Saginaw once again to work on the explosiveness of his skating as well as his two-way play.
Here’s NHL.com’s Tim Campbell on Paul Statsny:

Stastny brings a known quantity to the Jets, who scrambled to replace Little last season by moving Wheeler to center and later trading for Cody Eakin prior to the 2020 NHL Trade Deadline. Stastny scored 38 points (17 goals, 21 assists) in 71 games for Vegas last season and still possesses good hands, high hockey IQ and a reliability factor that will be key. In addition, Stastny was previously a strong fit for the locker room and is seen as a potentially important influence on Laine, who looks to improve his responsibility and consistency.

Player controversy has seemingly found its way into Kevin Cheveldayoff and the Jets’ lives once again, with Patrik Laine and Jack Roslovic names amidst constant trade speculation. The former’s agent has agreed that a change of scenery for the Finnish sharpshooter would be the best for everyone, whereas the latter has flat out requested a trade, holding out of training camp in the mean time. The last thing this team needs is another season filled with locker room distractions disrupting their on-ice performance, but it seems like this will be the case once again. A potential Laine and/or Roslovic would help shore up the Jets back end, with The Fourth Period reporting that Winnipeg was asking for a return of Brett Pesce and Martin Necas in exchange for Laine.
Following the messy departure of Dustin Byfuglien, the Jets’ backend has been the teams major concern due to the lack of its experience and high end talent. While the addition of a recent Calgary Flame in Derek Forbort provides a greater presence on the penalty kill and in other key defensive situations, the back end should have gotten the most attention by far from general manager Kevin Cheveldayoff. I was very surprised when Travis Hamonic didn’t at the very least sign a PTO with the Jets, due to his strong desire to play close to his hometown of Saint Malo, Manitoba, only 56 minutes away from the city of Winnipeg. While Sami Niku can certainly play regular minutes at the NHL level, it may have been best for his development to play one more season down in the AHL with the Manitoba Moose, a luxury that could’ve been possible with a Hamonic signing. With such a weak defensive corps,
Connor Hellebuyck will need to stand on his head once again in order to secure a playoff spot for his team. The shortened season could heavily come in the Jets favour, as it reduces their starters workload tremendously, with Hellebuyck leading the NHL in games played (188), minutes played (10,938), and shots faced (5,895) over the last three seasons. With each win worth so much more during the 2020-21 season, Hellebuyck’s clutch performances will be all the more valuable.
“The biggest reason the Jets needed to lean on Hellebuyck so much a year ago, and will most likely have to again this season, is that the defense is simply not very good. Not on paper. Not on the ice.” wrote Adam Gretz, a contributor at NBC Sports. He goes on to claim that the “bright spots on the defense right now are Josh Morrissey, Neal Pionk, and Dylan DeMelo.” “Morrissey is a fine player, but he’s not somebody that is going to be the No. 1 blueliner on a Stanley Cup contender. Pionk had a very strong year and outperformed the player he was traded for (Jacob Trouba). DeMelo was re-signed after being acquired at the trade deadline and gives them a solid, if unspectacular defensive presence at the top of their blue line.”
Outside of the three aforementioned players, Gretz confirms the lack of depth, stating: “The rest of the blue line is a patchwork group that is going to put a lot of pressure on their goalie. The Jets’ defensive performance a year ago placed them in the bottom 10 of most defensive metrics, including shots against, scoring chances against, and expected goals against.
Even with a Vezina Trophy winning goalie they were still only 10th in the league in goals against per game. Not a bad number, but not as good as you would expect with a goalie that great.” With a Vezina calibre goaltender and an elite-tier, as of now, forward group, the Jets should be a team that will push for the Stanley Cup this upcoming season. The difference between their current lineup and the one they iced during their 114 point 2017-18 season is the shell of their former D-core that currently exists.
The departures of Dustin Byfuglien, Tyler Myers, and Jacob Trouba completely depleted the Jets’ backend, and while Ville Heinola, Dylan Samberg, and Logan Stanley are all promising prospects, all three are ways away from making Winnipeg anything more then what they currently are; a bubble-team at best.
Projected Lineup:
Projected Taxi Squad:
Uncategorized
Recent articles from Prajeya Parmar