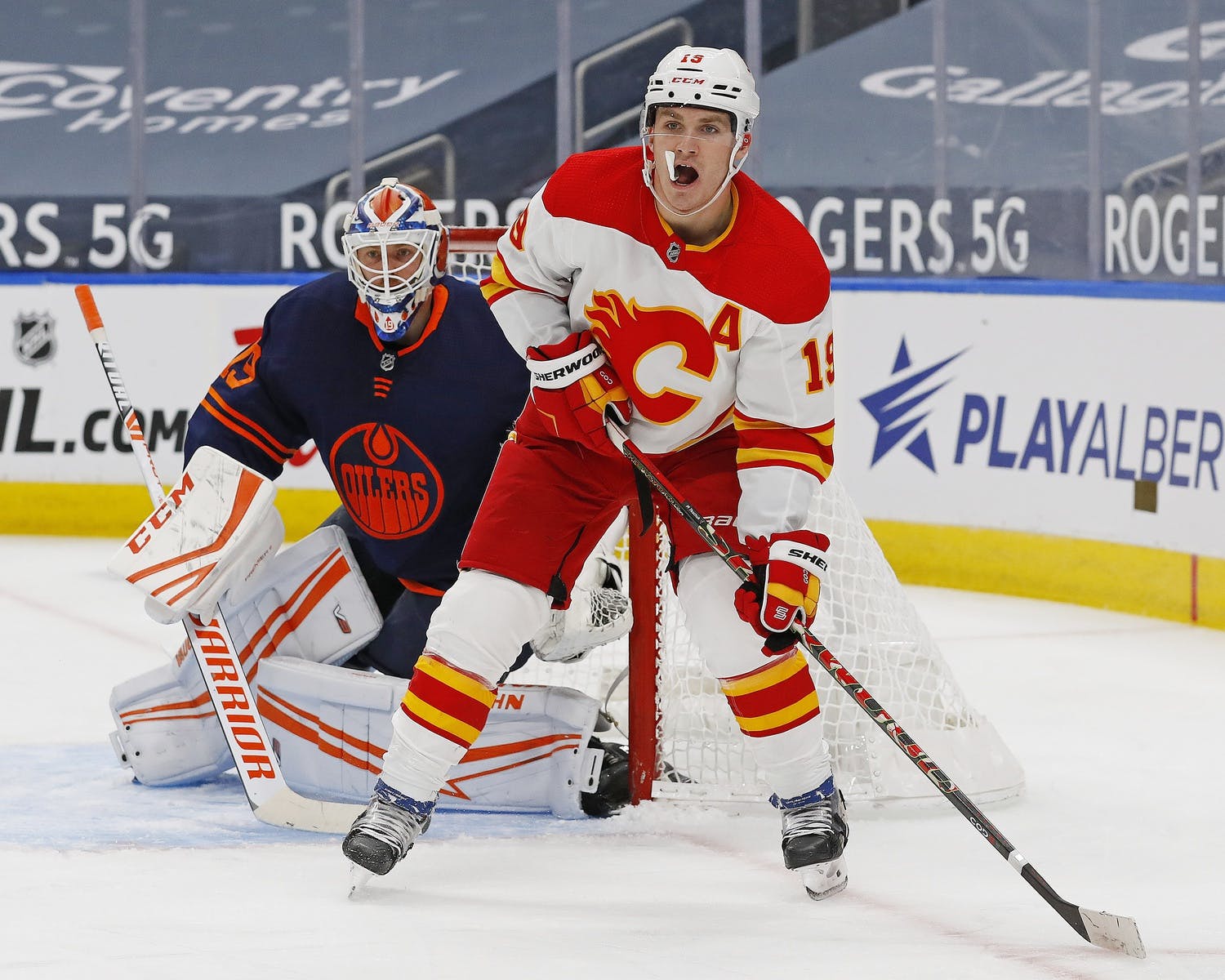 By Ryan Pike
1 year ago
Within the National Hockey League, there are two types of teams. There are 30 teams that wish noted agitator and skilled forward Matthew Tkachuk was on their team, and there’s the one team, the Calgary Flames, for which Tkachuk is currently playing.
Tkachuk has been a consistently strong player for the Flames for his entire pro career. In 2020-21, he took a step back, but he remained one of their better players (albeit a fairly unlucky one).

The eldest child of long-time NHLer Keith Tkachuk, Matthew was born in the Scottsdale, Arizona area while his dad was playing for the Coyotes. He spent most of his formative years in the St. Louis area and came up through their minor hockey programs.
Tkachuk earned accolades as a teenager and played two strong seasons with the U.S. National Development Program, then jumped to the Ontario Hockey League to pursue a Memorial Cup with the London Knights. His move paid off, as he was a key cog in the Knights’ march to the 2016 junior hockey crown. He was selected by the Flames sixth overall in the 2016 NHL Draft.
Tkachuk made the Flames in his very first training camp. He bounced around the lineup a bit before settling in on a shutdown line with Mikael Backlund and Michael Frolik, affectionately nicknamed the “3M Line” by fans. The trio spent the better part of three full seasons together, with Frolik being replaced by Andrew Mangiapane after Frolik tumbled down to the fourth line (and was later traded to Buffalo) in 2019-20.

The 2020-21 season was Tkachuk’s fifth year pro. He played primarily with Elias Lindholm and a rotation of other wingers – usually one of Dillon Dube, Andrew Mangiapane or Johnny Gaudreau. Because he played with left-shot forwards, he usually played on the right wing. From an expected goals perspective, Gaudreau and Mangiapane were Tkachuk and Lindholm’s most productive linemates.
Tkachuk played most of the season as the first line winger and on the top power play unit. His usage changed up a bit after the change-over from Geoff Ward to Darryl Sutter as his five-on-five average ice time dropped 1:24 and overall by 2:45 after the coaching changeover. Sutter still used him in high leverage situations, but opted for a more balanced attack than his predecessor. For someone who seems to relish having the game on his stick, that couldn’t have been fun for Tkachuk.
And we should probably address the elephant in the room…
The incident occurred in the second of back-to-back Flames losses to the Leafs that dropped the club to the .500 mark. A few games later the club had a closed door meeting where reportedly Tkachuk vented frustrations that his teammates didn’t jump into the scrum with him.

Calgary held a players-only meeting last Friday, and it sounds like he conveyed that message. It was received, although some comments were made to him that it can’t be a riot every night. Get your feelings in the open, get it sorted out, and play. The results speak for themselves.

If you want to argue that Tkachuk played upset this past season – as in generally grumpy at his teammates and/or coach – you’re welcome to do so, but his underlying numbers don’t really scream “This guy wasn’t trying.”
It wasn’t all wine and roses for #19, though.
Tkachuk frequently made pronouncements on media Zoom availabilities that he needed to be better, with the implication being that he felt if he was better it would push the team over the top. He was frequently noticeable and had many strong games, but too often he fell just a bit short of making a key pass, drawing a key penalty or scoring a key goal. He was still one of the club’s better players – his average game score was the best on the team – but he was just a bit off from where he’s been in the recent past.
He was good, but not quite as good as the Flames needed him to be.

Tkachuk turns 24 in December and the 2021-22 season will be the third and final season of his bridge deal. When his deal expires in July 2022, he’ll be a restricted free agent with arbitration rights and a qualifying offer of $9 million. Evolving Hockey projects his next deal at somewhere between $7.9 million (5 years) and $9.7 million (8 years).
Tkachuk is a proud product of the USA Hockey system – he’s worn the red, white and blue at the Under-17 Worlds, the Under-18 Worlds and the World Juniors – and he’s spoken in the past about a general desire to someday play in St. Louis. That’s morphed in recent weeks into the same breathless “Oh no, he’s going to leave!” rumours that have dogged Gaudreau since he was drafted in 2011. The absolute worst-case scenario is the Flames getting two more seasons out of Tkachuk and him walking in free agency in the summer of 2023 – aside from accepting the one year qualifying offer or filing for salary arbitration, Tkachuk doesn’t have a ton of rights within the system before then.
What actually unfolds will probably be more nuanced and complicated, since the salary cap is expected to be flat until around 2024-25 and players like Gaudreau and Mangiapane need new deals soon. Eventually, the Flames and Tkachuk will have to either commit to each other long-term or figure out what an amicable break-up would look like for both sides. That conversation may be on the horizon, but it’s not something that seems to be on the front burner for either camp.
As it stands, Tkachuk is one of the Flames’ best players. With David Rittich no longer with the organization and Mark Giordano deep into his 30s, Tkachuk is arguably his team’s emotional core. The big question is if he can tap into that emotion positively enough and consistently enough to move team in right direction.