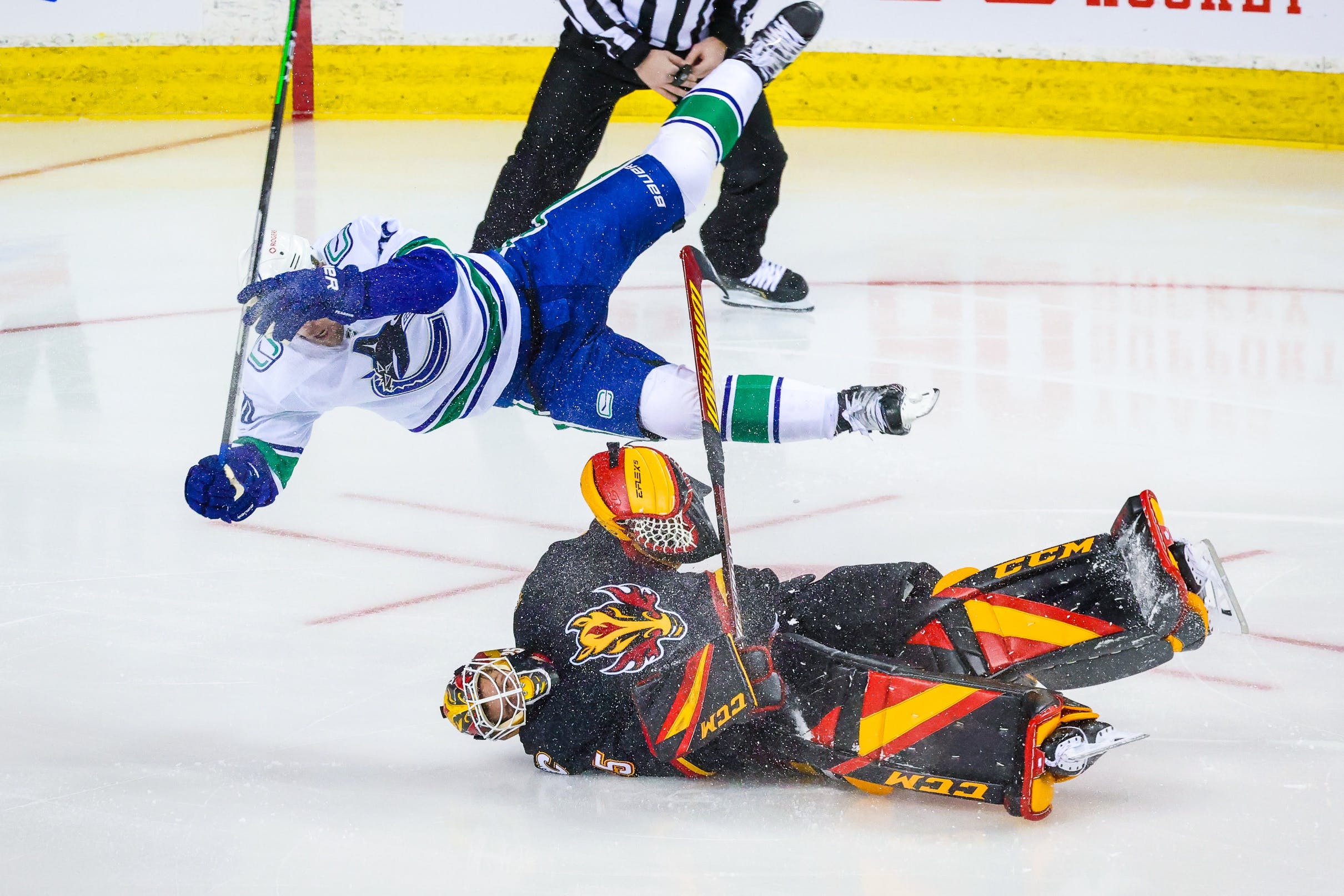 By Ryan Pike
1 year ago
The Calgary Flames came home on Wednesday night hoping to build off a good game on Monday in Vancouver. Instead, the Flames played a fairly disjointed, sloppy game en route to a fairly one-sided 5-1 loss to the visiting Canucks to end a stretch of four consecutive games against their rival to the west.

The Flames got off to a slow start in the first period, with Vancouver hemming them in a bit early. The Flames managed an early breakout, but Dominik Simon turned the puck in the neutral zone and Vancouver came in on a two-on-one. Jordie Benn buried a nice feed from Bo Horvat to make it 1-0.
The home side had some pushback after that, but weren’t able to answer back. Shots were 8-8 and scoring chances 4-3 Flames in the first period.
The second period started off weird and then got bad for the Flames. First up: Jacob Markstrom poke-checking Tanner Pearson well out of his own net!
Markstrom tried this again later in the period on Horvat, but the Canucks forward simply deked around him and scored on the wide-open net to make it a 2-0 lead for Vancouver. Whoops.
The Flames got on the scoreboard late in the period off an awesome play by Andrew Mangiapane. He turned on the jets, got around Quinn Hughes with speed on the outside, then cut in and tucked the puck past Braden Holtby. That cut the lead to 2-1.
And then the wheels fell off with two bad shifts for the Flames. 15 seconds after Mangiapane’s goal, the Flames couldn’t win a couple battles off a Vancouver dump-in. The Canucks passed the puck around and J.T. Miller’s one-timer from the slot beat Markstrom to make it a 3-1 game.
On the very next shift, the Flames again couldn’t grab a loose puck or clear it out cleanly at their own blueline. A couple passes later and Nate Schmidt’s shot beat Markstrom to make it 4-1 Vancouver.
Shots were 15-13 Canucks and scoring chances 14-10 Canucks in the second period.
The Canucks defended well in the third period, allowing the Flames to buzz around the perimeter but not allowing good chances against. The Flames got caught pressing midway through the period, turned the puck over and Vancouver came back with a four-on-one rush. They scored, with Brock Boeser going top shelf on Markstrom to make it 5-1.
David Rittich came in for the last chunk of the third period. He was fine.
Shots were 15-10 Flames and scoring chances 10-6 in the third period.

Well, they gave up a four-on-one rush, and that was fairly representative of their two-way play for good stretches of this game. They had brief moments that looked good, but their puck management wasn’t great and they allowed Vancouver way too many good looks and odd-man rushes.
If you look at the goals the Flames gave up, they were almost all preceded by some wonky decision-making (and/or turnovers) that put the Canucks in advantageous situations.

Mangiapane scored a sweet goal, so he gets it.

Allowing two goals against less than a minute after you’ve drawn back within one goal isn’t a great plan for success. Vancouver’s two quick goals late in the second period completely deflated the Flames.

Brett Ritchie made his Flames debut! He was fine.

The Flames (8-7-1) are back in action on Friday night when they host the Edmonton Oilers in the first half of a home-and-home set that concludes on Saturday night in Edmonton.
Uncategorized
Recent articles from Ryan Pike