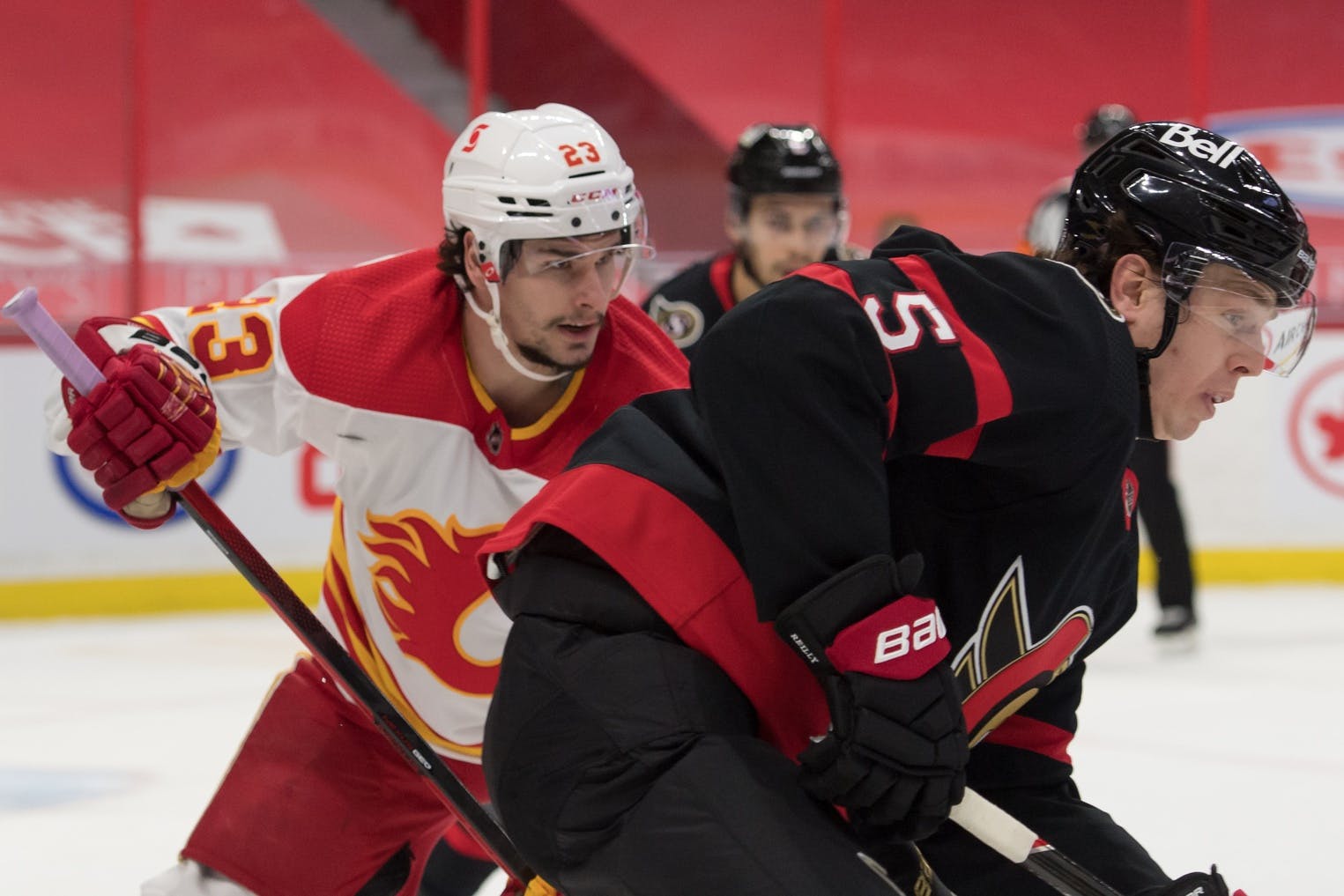 By Ryan Pike
1 year ago
On Thursday in Ottawa, the Calgary Flames looked out of gas against the Ottawa Senators. On Saturday afternoon, they looked like they were playing with a full tank. The Flames scored early, never trailed, and skated to a 6-3 win over the Senators.

The Flames looked full of pep to start this game, skating well and getting chances. They got on the board four minutes in. With his linemates changing, Johnny Gaudreau skated into Ottawa’s zone. He protected the puck and waited for reinforcements to arrive; they did in the form of Juuso Valimaki, who accepted a crisp pass and beat Matt Murphy with a wrist shot to make it 1-0 Calgary.
37 seconds later, the Flames scored again off the rush. On a three-on-two, Mikael Backlund fired an Andrew Mangiapane pass top corner on Murray to make it 2-0 Flames.
A little later, Elias Lindholm stole the puck from Josh Norris and beat Murphy with a quick shot to extend the lead to 3-0.
But Ottawa answered back on the power play. With Noah Hanifin in the box, Drake Batherson beat David Rittich with a wrist shot from the top of the circles to cut the lead to 3-1.
Shots were 20-10 Flames and scoring chances 8-4 Flames in the first period.
The Flames padded their lead on the power play in the second period. The Senators collected a loose puck after an initial shot hit Matthew Tkachuk in the back. But Gaudreau stole the puck back and fed Sean Monahan for a chance that beat Murray to make it 4-1.
With Sam Bennett in the box, the Flames got their first shorthanded goal of the season. As usual, Backlund and Mangiapane led a shorthanded rush. Their initial chance was bobbled, but Backlund fed Mangiapane for a quick shot in front of the net that beat Murray to make it 5-1.
The Senators got another power play goal to cut the lead. Off a face-off win, Colin White’s shot through traffic eluded Rittich made it 5-2 Flames.
But a little later, Matthew Tkachuk redirected a Backlund pass past Murray, off a nice cycle effort by their line, and that gave the Flames a 6-2 lead heading into the intermission.
Shots were 13-10 Flames and scoring chances 7-6 Flames in second period.
Ottawa backup goalie Joey Daccord came in for the third period. Brady Tkachuk scored a power play goal, using Matthew’s patented “between the legs” move, and cut the lead to 6-3 Flames.
But that’s as close as the Senators would get. Shots were 14-5 Senators and scoring chances 6-4 Senators in the third period.

The Flames weren’t perfect. They’re still a bit leaky defensively, took too many penalties and allowed three power play goals. Against a lot of teams, that’s a death sentence. Against Ottawa, though, it just means your club better be good at five-on-five. The Flames out-scored the Senators 4-0 at even strength, which was good enough to overcome their special teams foibles.

Backlund had three points and was in on a shorthanded goal and two even strength goals. If Backlund’s line can be this good at even strength on most nights, they’ll have decent results as a team.

Lindholm’s goal gave the Flames a three goal lead. The Senators eventually answered back, but the Flames always had sufficient breathing room that they never seemed to get too rattled by Ottawa’s push.

This was Backlund’s 711th NHL game, tying him with Jim Peplinski for seventh all-time in franchise history.
Milan Lucic fought in the first period.

The Flames (10-10-2) are back in action on Monday night… against Ottawa! Yes, again.
Uncategorized
Recent articles from Ryan Pike