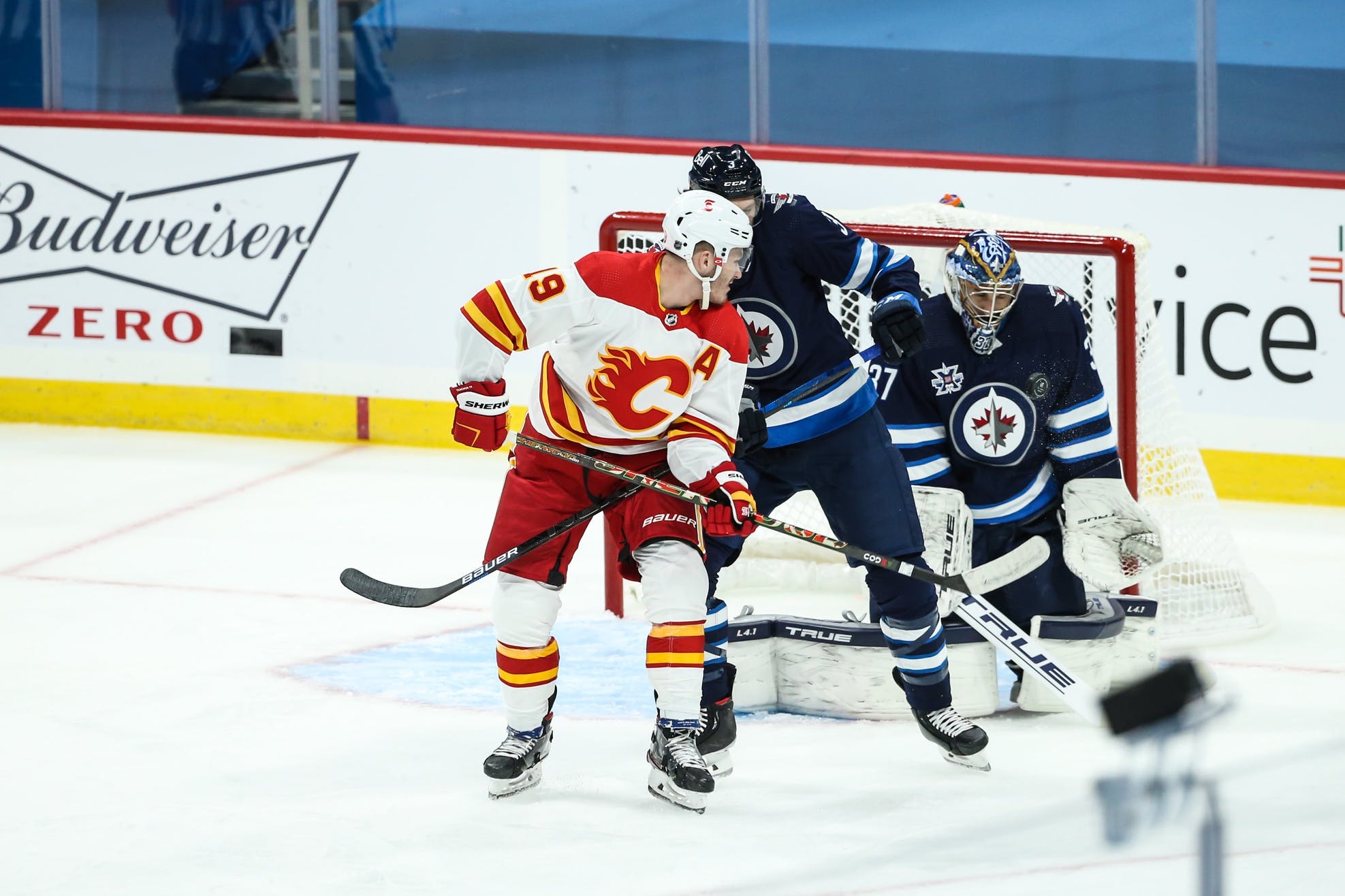 By Ryan Pike
2 years ago
The Calgary Flames were on full display in their season-opener against the Winnipeg Jets, for better and for worse. After a superb first 20 minutes, the Flames never quite found that consistency or attention to detail for the rest of the game.
They lost their season-opener to the Jets in overtime by a 4-3 score.

The Flames were excellent early. They skated well. They made good decisions with the puck. They fore-checked. And they were rewarded offensively.
After a Winnipeg icing, the Flames took advantage. Elias Lindholm won the puck back to the point. After a quick pass to Mark Giordano and back, Rasmus Andersson put the puck on net. Matthew Tkachuk deflected the puck from the slot past Connor Hellebuyck to give the Flames a 1-0 lead.
The Jets got that goal back a little later, but it was off a wild sequence at both ends of the ice. The Flames’ fourth line, led by Sam Bennett, set up Andersson for a great scoring chance. Derek Forbort barely blocked Andersson’s shot and amidst all the chaos, the puck got to Patrik Laine. He took off on a breakaway and beat Jacob Markstrom with a laser of a shot to tie the game at 1-1.
Chris Tanev was hauled down on a subsequent Jets rush and drew a penalty. On the ensuing Flames power play, Lindholm made a nice cross-zone pass to Johnny Gaudreau, who waited for Hellebuyck to commit to going down before shelving it past him to give the Flames a 2-1 lead.
The Flames were hemmed in their own zone for a little but, but they managed to stay calm and break the puck out. Dillon Dube chased down an errant puck as it entered the Jets zone. Tanev held the puck in the offensive zone on a sloppy Jets exit attempt. A couple quick passes later, and Dube teed up a one-timer for Lindholm and he didn’t waste it, blasting it past Hellebuyck to give the visitors a 3-1 lead.
Shots were 13-6 Flames and scoring chances 9-4 Flames in the first period.
The Flames unravelled a bit in the second period. The Bennett line started out against Laine’s line and got their show run. 34 seconds into the period, the Jets made it 3-2. Bennett biffed on a pass attempt, as did Milan Lucic. Nikolaj Ehlers set up Laine and he rifled the puck past Markstrom to cut the lead to one
The Flames remained on their heels for the remainder of the game nd soon ended up on the wrong side of the ledger again. A too many men penalty off a sloppy line change and a Lindholm hooking call gave the Jets a 44 second two man advantage. They didn’t waste it, as Kyle Connor buried a one-timer past Markstrom to tie the game at 3-3.
Shots were 14-6 Jets and scoring chances 12-3 Jets in the second period.
The third period was fairly even-keeled, but the Jets got a tremendous scoring chance after the Flames misplayed the puck with Markstrom out of the net. That led to a wild sequence with three Flames, and Markstrom, sliding in front to block the open net.
But the Flames held on and made it to overtime. Shots were 12-7 Jets in the third period.
The Flames didn’t register a shot in overtime. Laine whiffed on an initial shot off the rush but his second shot beat Markstrom to give the Jets a 4-3 victory.

The devil, as they say, is in the details. The Flames were great early on, making smart little plays that built into smarter bigger plays. But in the second and third periods, they were a bit more disjointed and sloppy and the little things in their game were off, which led to bigger issues. Clearing attempts didn’t work. Passes didn’t connect. Shots weren’t well-aimed.
As a result, the Jets were able to climb back into things and make a game of it.

Let’s go with Lindholm, who played a ton in all situations and was generally quite good.
Honourable mention to another Swede, Andersson, who led the team in ice time. It’ll be a common occurrence this season. Markstrom was quite good, for what it’s worth.

The Jets were really good in the second period, but the Flames allowing their lead to be cut to one in the opening minute of that period was a portent of doom. They never seemed to fully get their legs underneath them for the rest of the game.

The Flames (0-0-1) head back to town and prepare for their home opener. They host the Vancouver Canucks at the Saddledome on Saturday night in the first of 10 meetings between these two clubs in 2020-21.
Uncategorized
Recent articles from Ryan Pike