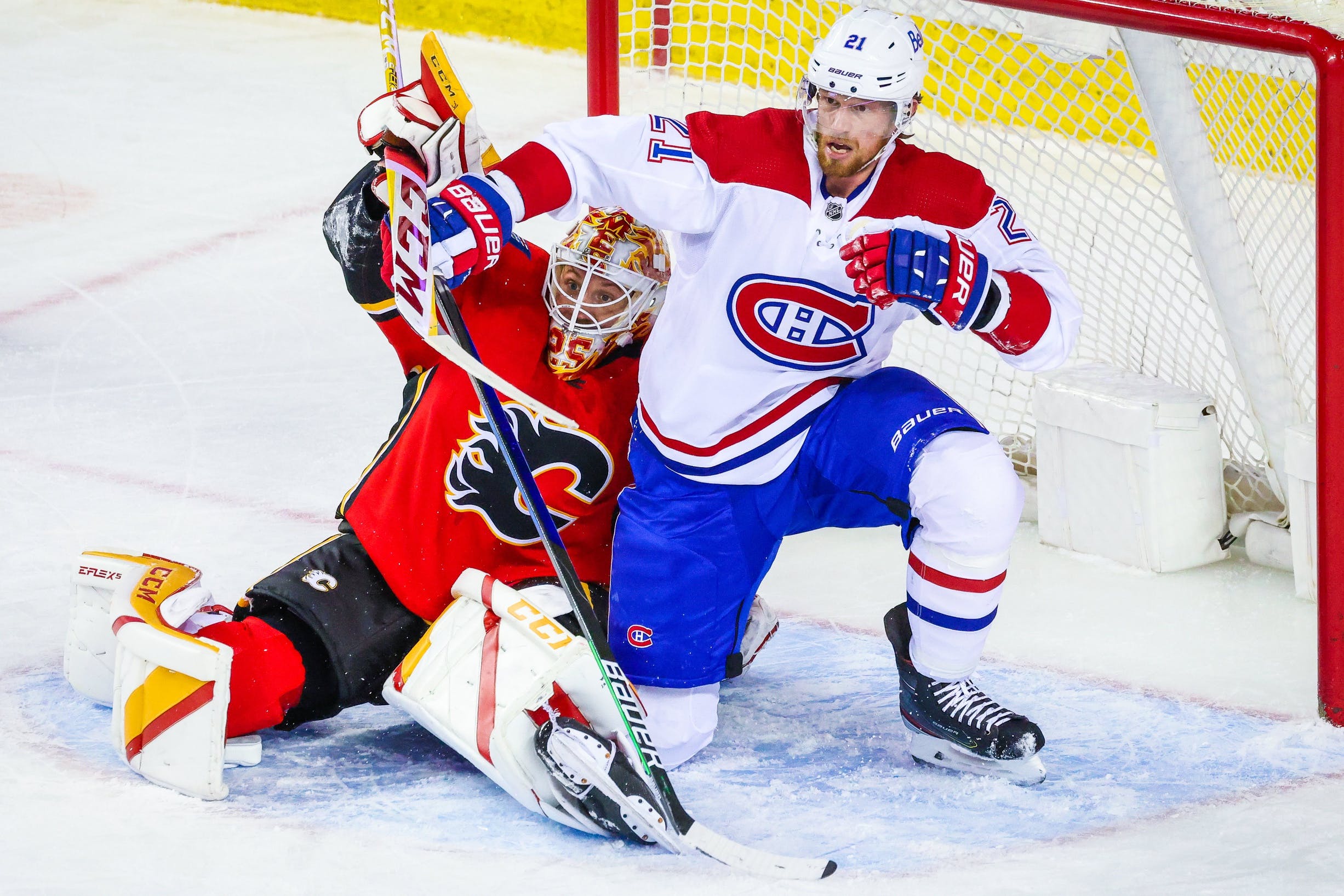 By Ryan Pike
1 year ago
The Calgary Flames played Montreal for the second time in as many nights absolutely needing a regulation win. For the second time in two nights: mission accomplished. The Flames beat the Canadiens 5-2 to inch closer to their divisional foes, but they lost defender Noah Hanifin to an injury early in the game.

The Flames got off to a bit of a sloppy, scrambly start defensively and the Habs made them pay for it. Jacob Markstrom made a couple initial stops on the Habs off a net-front scramble, but the Flames defense couldn’t clear the net-front area and Nick Suzuki banged in the loose puck to make it 1-0 Montreal.
But the Flames managed to tie things up before the end of the period. Matthew Tkachuk sent Johnny Gaudreau in on a partial breakaway on Cayden Primeau and Gaudreau uncorked a shot that beat Primeau top corner glove-side to tie the game at 1-1.
Shots were 14-11 Canadiens and scoring chances 11-4 Canadiens in the first period.
The Flames took the lead in the second period off a face-off win. Derek Ryan drew the puck back to Milan Lucic. Lucic’s shot through traffic eluded Primeau to give Calgary a 2-1 edge.
Andrew Mangiapane made a great individual effort to beat out Jeff Petry for an errant puck. He then found Gaudreau at the net for a quick tap-in to make it a 3-1 lead for the Flames.
But the Flames took three consecutive penalties in the period and eventually Montreal cashed in. Erik Gustafsson’s initial shot was stopped, but Corey Perry grabbed the loose puck out front and fed Tyler Toffoli and his quick shot beat Markstrom to cut the lead to 3-2.
Shots were 9-9 and scoring chances 5-4 Canadiens in the second period.
The Flames had a power play but couldn’t cash in. A little bit after that PP, though, the Flames cashed in at even strength. The Habs turned the puck over in the neutral zone and that led Derek Ryan and Brett Ritchie in on a two-on-one. Ryan fed Ritchie and he beat Primeau with a quick shot to extend their lead to 4-2.
Rasmus Andersson scored into an empty Montreal net (from his own red line) to make it a 5-2 final score. Shots were 14-9 Flames and scoring chances 4-2 Flames in the third period.

The Flames were not as good as they were on Friday. They weren’t quite as poised and they gave the Habs a lot more defensively than they did a night prior. But the Flames managed to get quality chances and buried enough of them to get two points.
The saying goes: you’ve gotta be good to be lucky. The Flames were more good than lucky on Friday and they were more lucky than good on Saturday, but they were enough of both to capture two massive points in the standings.

Gaudreau was the beneficiary of nice passes on both of his goals, but he was full marks as he buried those nice chances. The shot on his first goal on Primeau was Vintage Gaudreau.

The Flames have been on the other side a lot, so it was probably a nice boost for them to get Gaudreau’s first period goal with 31 seconds left to tie things up.

Noah Hanifin suffered an injury early in the first period. He got up slowly, headed down the tunnel, and didn’t return. The Flames played the remainder of the game with five defensemen.

The Flames (21-23-3) are back in action on Monday when they host Montreal, again.
Uncategorized
Recent articles from Ryan Pike