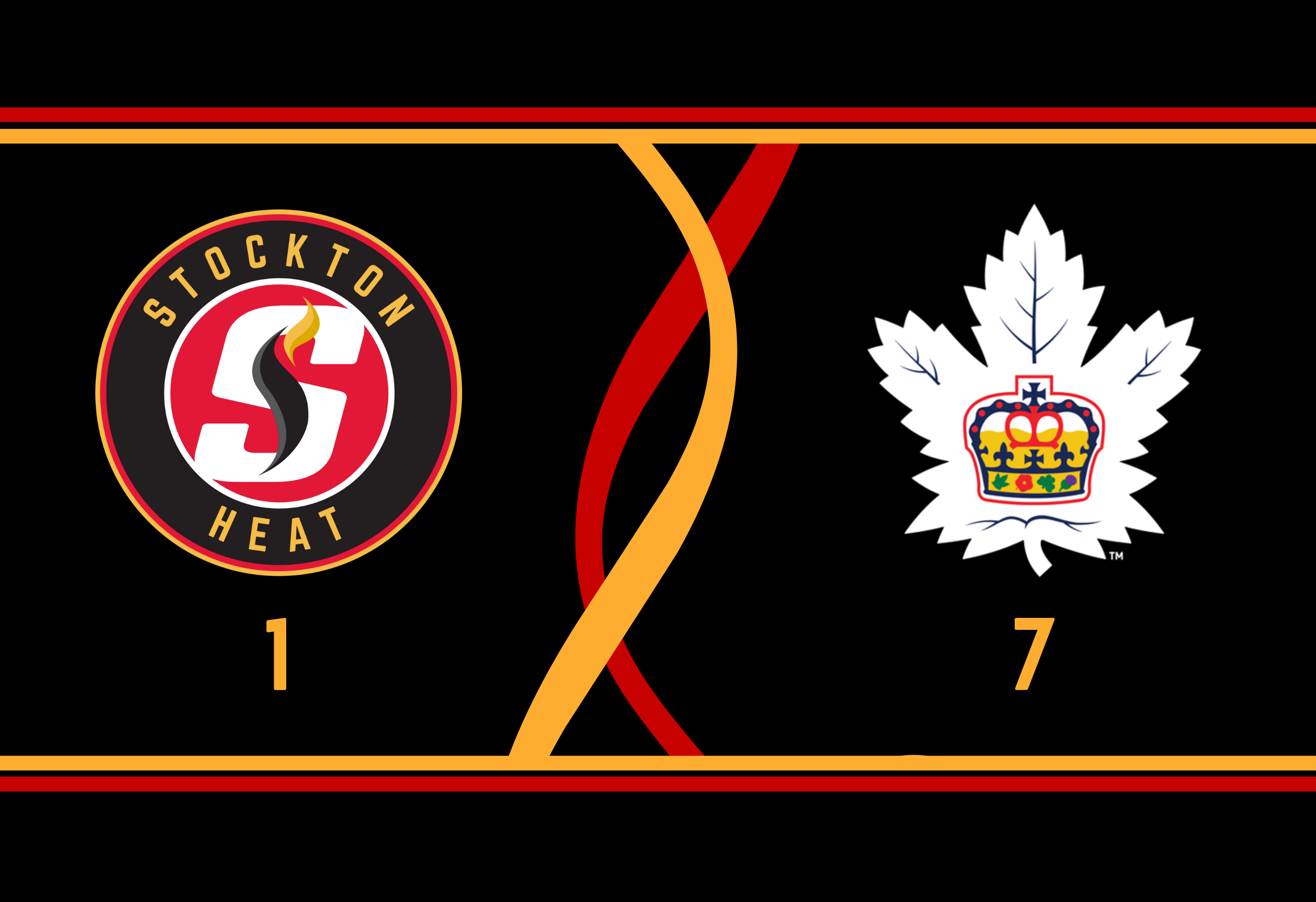 Photo credit:Graphic by Mike Gould. All logos are the property of their respective teams.

By Mike Gould
1 year ago
When it rains, it pours.
Right now, all of the rain in the world is falling on the Calgary Flames organization. The NHL club has lost three games in a row, with the latest coming against the Edmonton Oilers by an embarrassing 7-1 score. Sean Monahan and Derek Ryan are injured and Matthew Tkachuk hasn’t scored a goal in nine games.
The day after their blowout defeat to the Oilers, the Flames and their fans had a new reason to be optimistic: the team’s American Hockey League affiliate, the Stockton Heat, made its season debut on Sunday against the Toronto Marlies at 2:00 p.m.
The Heat gave Dustin Wolf his first professional start in the season-opening game, with Flames prospects Connor Zary, Emilio Pettersen, Colton Poolman, Dmitry Zavgorodniy, and Carl-Johan Lerby all getting their first tastes of AHL hockey.
Let’s just say that it was a game those players might all want to forget.

The Heat started well, firing the first seven shots of the game towards Marlies goaltender Andrew D’Agostini. He stopped all of them, setting the stage for Wolf to potentially respond in turn.
He did not. Wolf allowed a goal on the first shot he faced, although Zary was mostly to blame after turning the puck over in his own slot. Scott Pooley pounced and made it 1-0 Marlies.
Wolf made three consecutive saves after that before allowing goals on back-to-back shots from the Marlies. Former Flame Kenny Agostino received credit for the second goal after taking a long shot that deflected off Heat defender Rob Hamilton en route to the net; Tyler Gaudet scored Toronto’s third goal with a shot that barely squeaked through Wolf’s pads.
The officiating crew deliberated for a while after the Marlies’ fourth goal, which came after veteran forward Rich Clune drove hard into Wolf’s crease. The goal stood and Clune eventually received credit.
Finally, the Marlies’ fifth goal—on just their 11th shot—ended Wolf’s night. Once again, the puck found its way past Wolf after deflecting off Hamilton en route to the goal. Wolf lasted just 24:47 in his professional debut before being pulled in favour of backup Garret Sparks.
Owing largely to their hot start, the Heat out-shot the Marlies nine to five in the first period but played with far more looseness in the second, generating 12 shots and surrendering 17. Stockton’s top line acquitted itself well in the middle frame, with the Heat immediately becoming more dangerous whenever Adam Ruzicka, Emilio Pettersen, and (especially) Matthew Phillips stepped onto the ice.
Sparks started reasonably well after entering the game, stopping his first seven shots faced, but the Heat soon took a penalty (Luke Philp, for hooking) and surrendered a sixth goal just 5:10 after their second goalie entered the game.
The Heat struggled on special teams against the Marlies, going 0-for-2 on the penalty kill and also surrendering a shorthanded goal. Gaudet’s early second-period tally, which made it a 3-0 game, came while Marlies defenseman Timothy Liljegren was serving a high-sticking penalty.
After Sparks allowed the first shot he faced in the third period (making it a 7-0 game), the Heat went to a power play midway through the frame and finally managed to spoil D’Agostini’s shutout bid. Luke Philp scored Stockton’s first goal of the season on a sharp-angle snipe; the 25-year-old centre led the Heat with 19 goals last year.
The Flames lost 7-1 to the Oilers on Saturday; the Heat lost 7-1 to the Marlies on Sunday. Neither day was a holiday but it still felt like a looooooooong weekend.

Dustin Wolf had an unfortunate first professional outing, making only six saves on 11 shots. The Heat couldn’t capitalize on any of their early chances and ended up getting into a big hole against the opportunistic Marlies.
Their underwhelming special teams also ended up costing them big-time. Maybe they can build off Philp’s late power play goal.

Matthew Phillips was buzzing all game long despite the score being tilted in the Marlies’ favour. Unfortunately, despite the Heat out-shooting Toronto by a 32-30 count, they couldn’t generate any dangerous offense on a consistent basis until it was way too late.

The Heat will continue their home series against the Toronto Marlies this coming Tuesday at 6:00 p.m. MT. You can catch the game on AHL TV; I’ll be posting updates on Twitter at @miketgould.
Uncategorized
Recent articles from Mike Gould