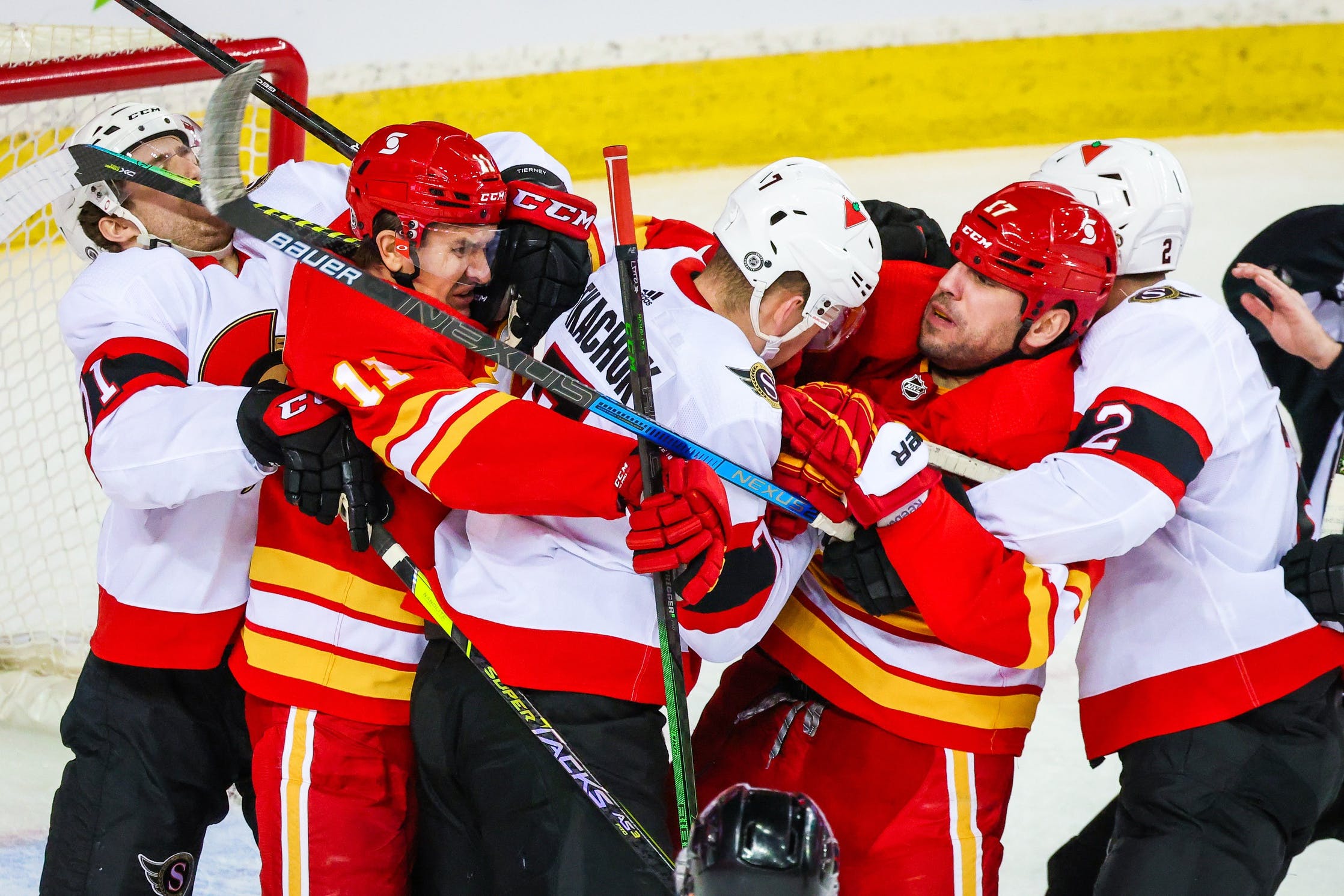 By Ryan Pike
1 year ago
On Saturday, the Calgary Flames battled for a good chunk of the game but lost a close one to the Edmonton Oilers. On Sunday against the Ottawa Senators, the Flames looked like a team playing their second game in as many nights for the first 40 minutes. But they found another gear in the third period and managed to force overtime. They lost to the Senators 4-3 in a shootout.

The opening 20 minutes were very low event, with several minutes often unfolding between burst of offense here and there.
Ottawa opened the scoring off a weird one. Chris Tanev attempted to block a Connor Brown shot. His effort both obscured the shot angle for Jacob Markstrom and changed it, and so the puck blooped past Markstrom to make it 1-0 Senators. (It was quite similar to Jesse Puljujarvi’s goal on Saturday, in that Markstrom didn’t seem to be able to track the shot due to block attempt.)
Later in the period, during some four-on-four play, the Flames were caught up ice and Ottawa got a two-on-zero rush. Chris Tierney avoided a diving Noah Hanifin to feed Ryan Dzingel for a redirect to give the Senators a 2-0 lead.
Shots were 7-6 Senators and scoring chances 9-2 Flames in the first period.
A few minutes into the second period, the Flames cut into the lead. With some bodies in-between him and the net, Mark Giordano fired a wrist shot. It beat Matt Murray five-hole to cut Ottawa’s advantage to 2-1.
But Ottawa reinstated their two-goal lead a little later. The Flames couldn’t clear out a loose puck after an initial Senators scoring chance. Amidst all the confusion, Colin White jammed in the puck to make it 3-1 Ottawa.
The Flames went the last 10:26 of the second period without a five-on-five shot. Shots were 11-9 Senators in the second period.
The Flames pressed in the third period as they tried to claw their way back.
On a power play, the Flames finally got a man advantage goal. Andrew Mangiapane’s rebound was nudged by Matthew Tkachuk to a wide-open Johnny Gaudreau, who scored to cut the Senators lead to 3-2.
And the Flames tied it up with a few minutes left in regulation, as Murray blocked a Dillon Dube scoring chance but the puck went right to a pinching Noah Hanifin, who beat Murray to make it a 3-3 game.
Shots were 16-3 Flames in the third period.
This game went to overtime, which solved nothing. So this game also went to a shootout. Tim Stuetzle and Drake Batherson scored for Ottawa, while Matthew Tkachuk scored for Calgary, and the Senators earned a 4-3 win.

They had way less emotion and energy than they showed in Saturday’s game, but also experienced the same attention to detail problems for the first 40 minutes. They were way better in the third period, though, and you have to wonder if they could’ve won in regulation had their power play scored more than just the once.

Tkachuk had two primary assists, setting up Calgary’s first two goals. He gets the nod here.

Right after the Flames tied it up, they almost gave the lead right back to the Senators after Markstrom was caught out of his net. Vakimaki’s heroics ensured they captured at least a point.

The Flames (11-12-3) are back in action on Thursday against the Montreal Canadiens.
Uncategorized
Recent articles from Ryan Pike