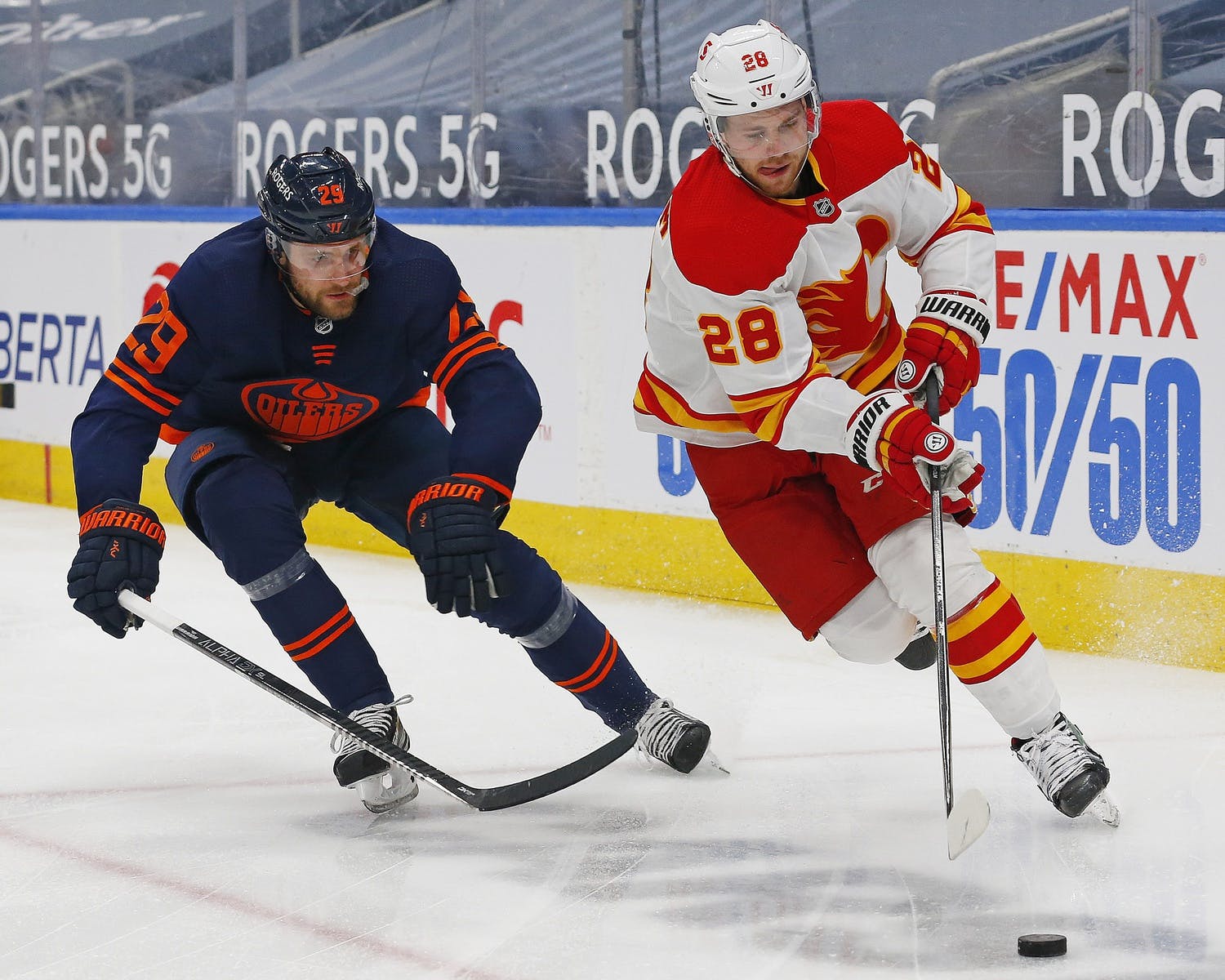 By Ryan Pike
1 year ago
The Calgary Flames went into Edmonton on Thursday night needing a win to stay alive in the North Division playoff race. Well, mission accomplished. The Flames weren’t perfect, but were good enough to win a tight-checking 3-1 victory over the Edmonton Oilers in Rogers Place.

The Flames opened the scoring off a nice little sequence of smart plays. Kris Russell bobbled a clearing attempt at the blueline and it was captured by Johnny Gaudreau, who made the simple play by throwing the puck around the boards to Matthew Tkachuk. Tkachuk, from behind the net, fed Elias Lindholm for a one-timer that beat Mike Smith to make it 1-0 Calgary.
But the Oilers answered back before the end of the period. The Flames had a lengthy stretch in the Oilers zone but couldn’t score. The Oilers came back the other way and off a bit of a clunky line change, James Neal was able to walk in on Jacob Markstrom and pick a corner of the net to tie the game at 1-1.
Shots were 8-7 Oilers and scoring chances 8-6 Oilers in the first period.
The Flames took the lead off a face-off win in the Edmonton zone. Tkachuk drew the puck back to Rasmus Andersson. Andersson’s point shot glanced off Lindholm and beat Smith to give the Flames a 2-1 advantage.
Smith committed robbery late in the period. Shorthanded, Mikael Backlund and Lindholm walked in on a two-on-one rush. Backlund fed Lindholm for the expected hat trick goal, but Smith robbed Lindholm with a quick glove hand to keep the game close.
Shots were 15-9 Flames and scoring chances 9-3 Flames in the second period.
The Oilers were pushing for the first chunk of the third period, but a smart neutral zone play led to a third Flames goal. Andersson ate a hit in the neutral zone to spring Milan Lucic into the offensive zone with a lane to the net. Smith made the initial save on Lucic, mostly, but the puck trickled out from between his legs and into the crease. Dillon Dube buried the loose puck to extend Calgary’s lead to 3-1.
Shots were 14-8 Oilers and scoring chances 7-6 Flames in the third period.

The Flames weren’t perfect – they took too many dang penalties, for example – but they were a little bit better than Edmonton five-on-five, bottled up their potent special teams and played with urgency and desperation. They got good goaltending and timely goals, and that’s a recipe for two points more often than not.

Lindholm had two goals and was perpetually dangerous.
Stick-taps to Andersson, who made nice plays that led to Calgary’s second and third goals. Markstrom was also rock-solid for all three periods.

Dube’s third period insurance goal was massive, as the Oilers were pressing for a good chunk of the third and seemed poised to get something soon. (The Flames’ penalty kill right after the 3-1 goal was also quite clutch.)

This was Mikael Backlund’s 50th Battle of Alberta.
The Flames are now 18-1-0 when leading after two periods.
With the win, the Flames’ magic number drops to 10.5. Any combination of Flames wins and Montreal losses adding up to 10.5 sends the Flames to the post-season. (Shootout/overtime losses count as 0.5 of a win/loss.)

The Flames (22-24-3) are back at it on Saturday when they visit the Oilers. Again.
Uncategorized
Recent articles from Ryan Pike