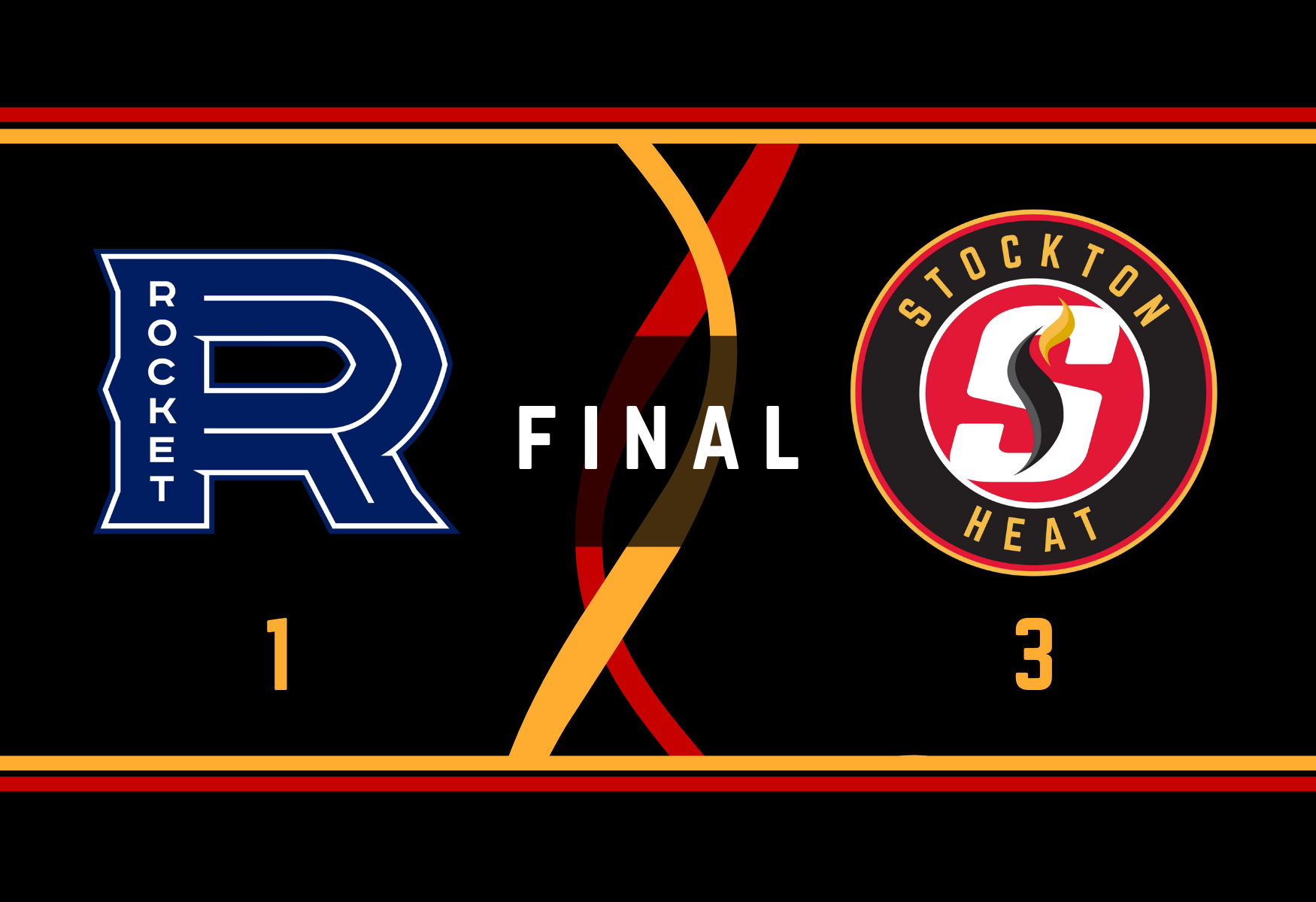 By Mike Gould
1 year ago
The Stockton Heat have finally done it! The Heat defeated the Laval Rocket on Tuesday after six fruitless tries, improving to 1-5-1 against their Québécois rivals this season.
It was Stockton’s final chance to defeat Laval this regular season. The Heat entered the game having defeated each of their three other Canadian Division rivals at least twice; however, they had taken regulation losses in five-straight contests against Laval, having earned a singular point in a 4-3 overtime loss to the Rocket on Mar. 18.
Stockton allowed the first goal of Tuesday’s contest but rebounded with three unanswered markers, finally proving their complete capability of dispatching all four of their Canadian opponents.
Garret Sparks made 28 saves for Stockton, which was outshot 29-27 in the game; Laval netminder Michael McNiven surrendered two goals on 26 shots. Adam Ruzicka and Byron Froese solved McNiven before Eetu Tuulola sealed the win with an empty-net goal.

Dmitry Zavgorodniy enjoyed a nice bounce-back game on Sunday after being held out of the lineup as a healthy scratch in Friday’s contests. He continued his forward progress on Tuesday and earned his way up to Stockton’s top line, with Matthew Phillips and Adam Ruzicka, with his excellent play in the game.
Stockton received four power play opportunities in the first period. Just before the first one expired, Zavgorodniy received a pass in the slot from Emilio Pettersen and sent a one-timer towards McNiven. The Laval goaltender had to be sharp to deny the chance.
Stockton’s only penalty of the period came as a result of a fight between Heat forward Glenn Gawdin and Rocket rearguard Gustav Olofsson. The altercation occurred in the middle of Stockton’s second power play opportunity; both offending players received five minutes for fighting.
After failing to capitalize on their first three opportunities with the man-advantage, the Heat received another chance with less than three minutes remaining in the opening 20. The serving referees called Jordan Weal for a trip at the 17:06 mark, sending Stockton to yet another power play.
The Heat registered two shots against McNiven during the two minutes but their best chance failed to hit the target. A nice pass by Rob Hamilton sent Heat forward Giorgio Estephan in against McNiven on a partial break; however, Estephan waited too long to shoot and his attempt deflected harmlessly over the cage.
Stockton outshot Laval by an 11-6 margin in the first period but the flow of play started to change in the middle frame, particularly after the Rocket opened the scoring.
With 8:01 elapsed in the second period, Laval agitator Yannick Veilleux deflected a long shot past Sparks to give his team a 1-0 lead. Weal and Olofsson picked up the helpers on Veilleux’s seventh of the year.
Zavgorodniy continued his excellent showing in the second period. He came to play with excellent two-way commitment and his transitional game at its best.
The points, indeed, started to come for Zavgorodniy in the dying minutes of the period. With the Heat looking to move up the ice quickly, Zavgorodniy tipped a Connor Mackey pass up to a streaking Ruzicka. Zavgorodniy’s new centre skated in all alone on McNiven and slid the puck into the cage for the 10th goal of his sophomore campaign.
Phillips and Zavgorodniy continued to show their budding chemistry in the third period. After a broken zone entry, Phillips picked up the puck and sent Zavgorodniy into the clear with a nice pass. “Little Z” tried to wait and put the puck through McNiven’s five-hole but he just missed the opening.
Nevertheless, the Heat finally managed to get the go-ahead goal with just 3:13 remaining in regulation time. Captain Byron Froese picked up the puck in the left corner and did what any old-school coach would love: he put it on the net.
Froese’s shot caught McNiven off-guard and it found its way in. Mackey and Colton Beck got the helpers on Froese’ fourth tally of the campaign.
Eetu Tuulola sealed the Stockton victory with an empty-net goal, his second marker of the season, with 1:17 remaining in the game.

They managed to overcome adversity. Their early struggles on the power play and Laval scoring the first goal both could have taken the wind out of their collective sails.
Instead, they kept attacking with a relentless transition game and managed to avoid giving up too much in the middle of the ice. Plus… they got a bounce that they had needed for the last three weeks.

Dmitry Zavgorodniy put forth a breakout performance on Tuesday night. He was all over the puck and earned his new role on Stockton’s top line alongside Matthew Phillips and Adam Ruzicka.
Zavgorodniy entered Tuesday’s game still sporting goose eggs in almost every offensive category. Not anymore: He recorded his first professional point, a primary assist, in the game. He fired two shots and looked engaged at both ends of the ice.

The Heat will take the next week off before returning to action at the Scotiabank Saddledome on Wednesday, Apr. 14 against the Belleville Senators. You can catch that game on AHL TV; I’ll be posting updates on Twitter at @miketgould.
Uncategorized
Recent articles from Mike Gould