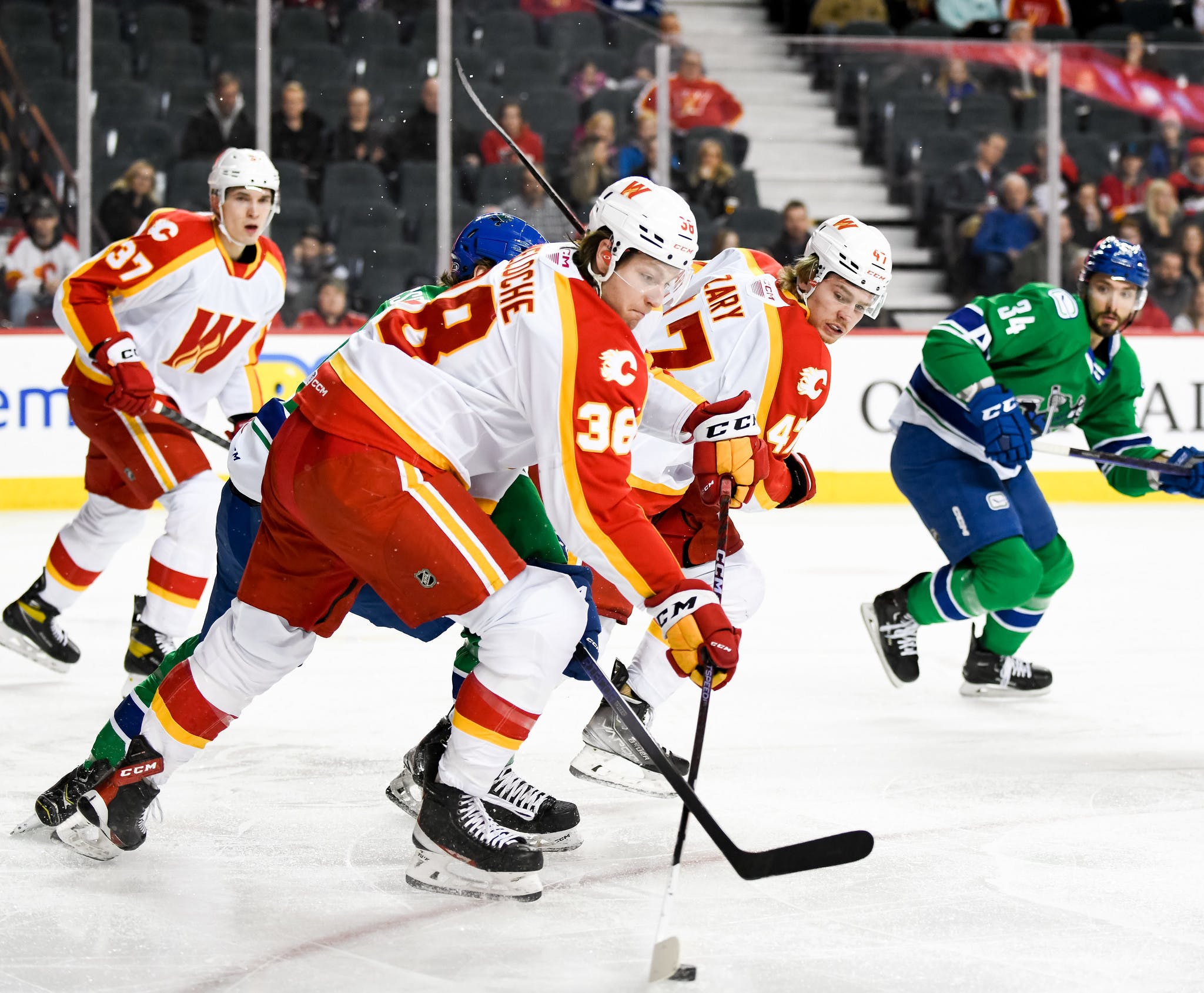 By Paige Siewert
13 days ago
The Calgary Wranglers and Abbotsford Canucks continued their series with their second game of the three taking place on Friday night. It wasn’t looking too hot for the Wranglers after they quickly fell behind 3-0 in the first period. However, they completed the comeback and forced a shootout where they picked up a 5-4 win.

Oscar Dansk got the start in net for this game to break things up and give Dustin Wolf a night off. Neither team got off to a hot start through the first half of the first period. Both were looking solid but no early scoring ensued.
Unfortunately for the Wranglers, their opponents didn’t stay as quiet on the scoreboard and things broke open towards the end of the period. A couple of turnovers and sloppy defensive play resulted in three unanswered goals before the opening period came to a close.
First was a breakaway goal 15:01 into the period, then a power play goal 17 seconds later at 15:18 and finally, a shorthanded goal 18:59 into the first. The Canucks made it through the first period scoring on three out of eight of their total shots and quite a run of momentum going into the first intermission.
In the second, the Wranglers had some power play time that overlapped from the first period and took advantage. Connor Zary got Calgary on the board with an odd deflection off of an Abbotsford skater. This power play goal came just 1:26 into the period with Jeremie Poirier and Adam Klapka picked up assists.
Oscar Dansk had some work to do just after the midway mark of the second period, putting up some huge saves on some high-danger shots from the Canucks. He stopped all 12 Abbotsford shots in the second and his teammates relieved some pressure off of him with some more scoring.
17:06 into the second, Ben Jones scored his seventh goal of the season with Connor Zary picking up an assist for his second point of the game.
35 seconds later, Nicolas Meloche scored his fourth goal of the season and the Wranglers and Canucks were quickly all evened up at three. Cole Schwindt and Kevin Rooney assisted on Meloche’s tally.
After two complete periods, the Canucks scored three unanswered in the first, the Wranglers scored three unanswered in the second and the third was set to start with a clean slate and a completely different game dynamic. The Wranglers trailed 20-15 in shots through 40 minutes of play.
In the third, the Canucks took a page out of the Wranglers book and scored an early goal to regain the lead. Tristen Nielsen came up the rush with some insanely good puck handling and beat Dansk for the Canucks fourth goal of the night just two minutes in. Tough break for Dansk but his play did not reflect the score of this game.
He remained solid for the better part of the period and kept this game close. The score stayed at 4-3 Abbotsford until Matthew Phillips did what he does and scored a clutch goal with 2:40 to go in regulation. He jammed in a rebound off of Radim Zohorna’s shot and Connor Zary also assisted to earn his third point of the night.
This forced the game out of regulation for the second night in a row. However, this game would not be decided in overtime. Abbotsford has three shots in overtime but Calgary did not register any. They still held on to force a shootout.
The Wranglers swept the shootout with Connor Zary shooting first, Jeremier Poirier shooting second and Matthew Phillips shooting third. The Canucks missed their first shot but made their next two so Calgary picked up the shootout win.
The final score was 5-4 and Abbotsford out-shot Calgary 29-26. Connor Zary was awarded the first star of the night and Matthew Phillips picked up the third star.

These two will finish up their extended series on Saturday evening. Saturday’s game is being offered for free on AHL.TV if you are looking for a stream but do not have a subscription. It’s worth catching some good free hockey if you want to check in on how the Wranglers are looking. It’s been an exciting series so far with both games going outside of regulation and the Wranglers ahead 2-0 on the week. The puck drop for their next match-up is set for 8:00 p.m. MT.
News
Recent articles from Paige Siewert