Recap: Wolf’s first AHL shutout, Wranglers winning streak up to three in 4-0 win against the Barracuda 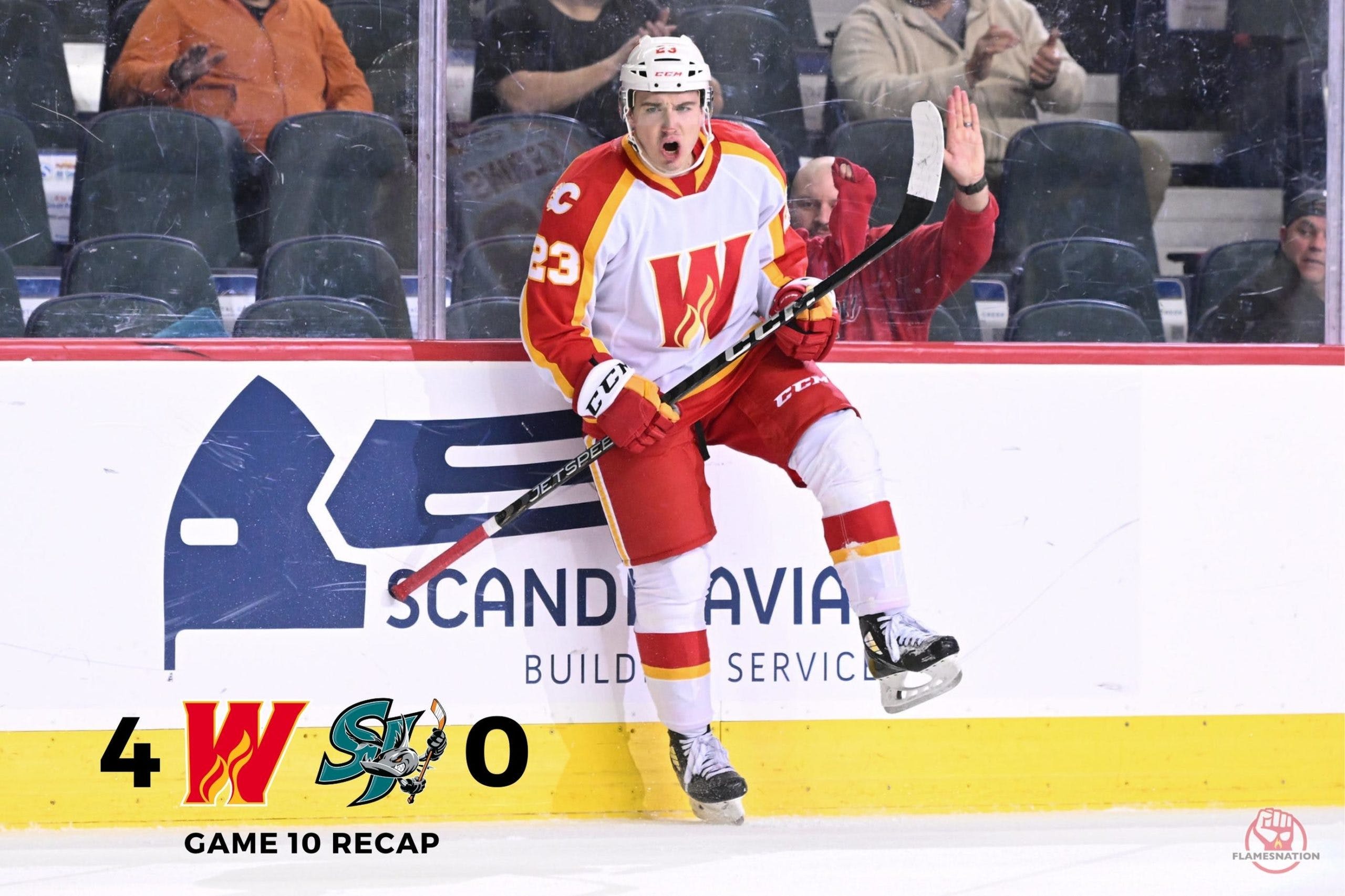 By Paige Siewert
24 days ago
The San Jose Barracuda stayed in town for a couple of days to finish up their series against the Wranglers after falling 8-2 to them on Sunday night. They faced off on Tuesday night. With the recent changes to the Flames lineups and a couple of call-ups coming from the Wranglers earlier in the week, all eyes were on warmups. No one unexpected was missing and if the Flames grab a forward or two, we won’t know until the coming days.

Dustin Wolf got his fourth straight start with Eetu Makiniemi starting on the other side of the ice. Wolf was the first to get challenged with San Jose starting the shooting in his zone. The first started at quite a fast pace and it was the Wranglers that were able to get on the board first. Emilio Pettersen scored his first of the year with a quick-release shot off a breakaway.
It’s tough to believe that is Pettersen’s first of the season but he’s been scratched a few games. This game was his sixth of the season and put his total points up to four. His goal was the first Wranglers shot of the game and was assisted by Yan Kuznetsov and Connor Zary.
The Wranglers were lucky to keep the lead only putting up three shots the whole period. Wolf on the other hand, had his work cut out for him. At the end of 20 minutes, he stopped all 17 of the Barracuda’s shots on goal and held his opponents scoreless.
The second started with quite a bit of flair with Ben Jones dropping the gloves with Luke Johnson. They both took their respective fighting penalties and not much follow-up action ensued.
Things stayed stable through the second until the last three minutes of the period. Rory Kerins shot one off the end boards and buried the puck on the wraparound. He was robbed of his first AHL last game when his goal was overturned but finally earned his first on paper on Tuesday night.
Nicolas Meloche and Walker Duehr picked up assists. Kerins was happy to get his first goal out of the way and spoke to the transition back up from the ECHL’s Rapid City Rush:

“Today was my fifth game in seven days so I’ve just kind of been on the go for the past week and just kind of in a grove right now. When my name gets called I’m just trying to stay up here and do the best I can to stay.”

There was more action to report after Kerins’ goal as about a minute and a half later, Matthew Phillips scored his ninth goal of the season to extend his scoring streak to eight games in a row. This tally secured his spot at the top of the league in goals and points. Assists went to Jakob Pelletier and Ilya Solovyov.
Local Airdrie product Aaron Dell came in relief in net following this goal. The Wranglers finished up two periods ahead 3-0 and went into the third quite comfortably. Just about halfway through the final frame, Nicolas Meloche made it 4-0 with his first goal of the season.
The Barracuda had a couple of opportunities to get at least a goal back late in the period, but the priority turned to protecting Wolf’s shutout and they did just that. Dustin Wolf earned a 24-save shutout in the Wranglers 4-0 and this turned out to be his first AHL shutout. Last year, his only shutouts were in the postseason.
This brings the Wranglers’ winning streak up to three and the San Jose Barracuda go home being swept by Calgary.

If there are call-ups to come in the next few days, there are a few forwards that deserve a shot and may actually be ready for it.  Note that Darryl Sutter has been at multiple Wranglers home games and has actually seen these guys play in person.
Most Probable
Matthew Phillips (9G, 5A, 14 pts) – Phillips is hot right now. There’s not much else he needs to prove. He had a hat trick in Sunday’s game against the Barracuda and leads the AHL in goals with eight. His former linemate, Adam Ruzicka, got some time on the top line last game with the Flames and I only wonder what could happen if he was given a fair shot.
Connor Zary (6G, 4A, 10 pts) – Zary tried working with Phillips and Pelletier on the top line but has been much better on the second line. His production has lit up and his injury woes appear to be a thing of the past. He plays a chippy game that could look very good for the Flames and he can score a goal here and there.
Jakob Pelletier (3G, 5A, 8 pts) – Pelletier is also a probable pick but not looking 100% so far this season. He still appears to be working off some preseason rust and is working towards getting his game fully back. He has been good but not as electric as his rookie season.
Less Probable
Ben Jones (3G, 6A, 9 pts) – Jones could probably fill a spot and be a body but I wouldn’t expect fireworks out of him. He’s been good, not exceptional so far and I don’t see specific skills elevating to an NHL level at this point in time.
Walker Duehr (2G, 2A, 4 pts) – Duehr had his shot last year in one game and played a really good camp. This year, he is off to quite a slow start. What caught the Flames coaching staff’s eyes last year, really doesn’t seem to be firing this year yet.

This game concluded the Wranglers’ homestand and they will kick off their road trip this Friday. They will travel east to play the Manitoba Moose on Friday night and Sunday morning. Their away record is currently 2-2-0-0 and their overall record is up to .500 with a 5-5-0-0 record. This places them fifth in the Pacific Division. Their next game on home ice will be on November 22nd. Friday’s game is set to start at 5:00 p.m MT.
News
Recent articles from Paige Siewert