Recap: Wranglers complete series sweep in 5-3 win over the Canucks 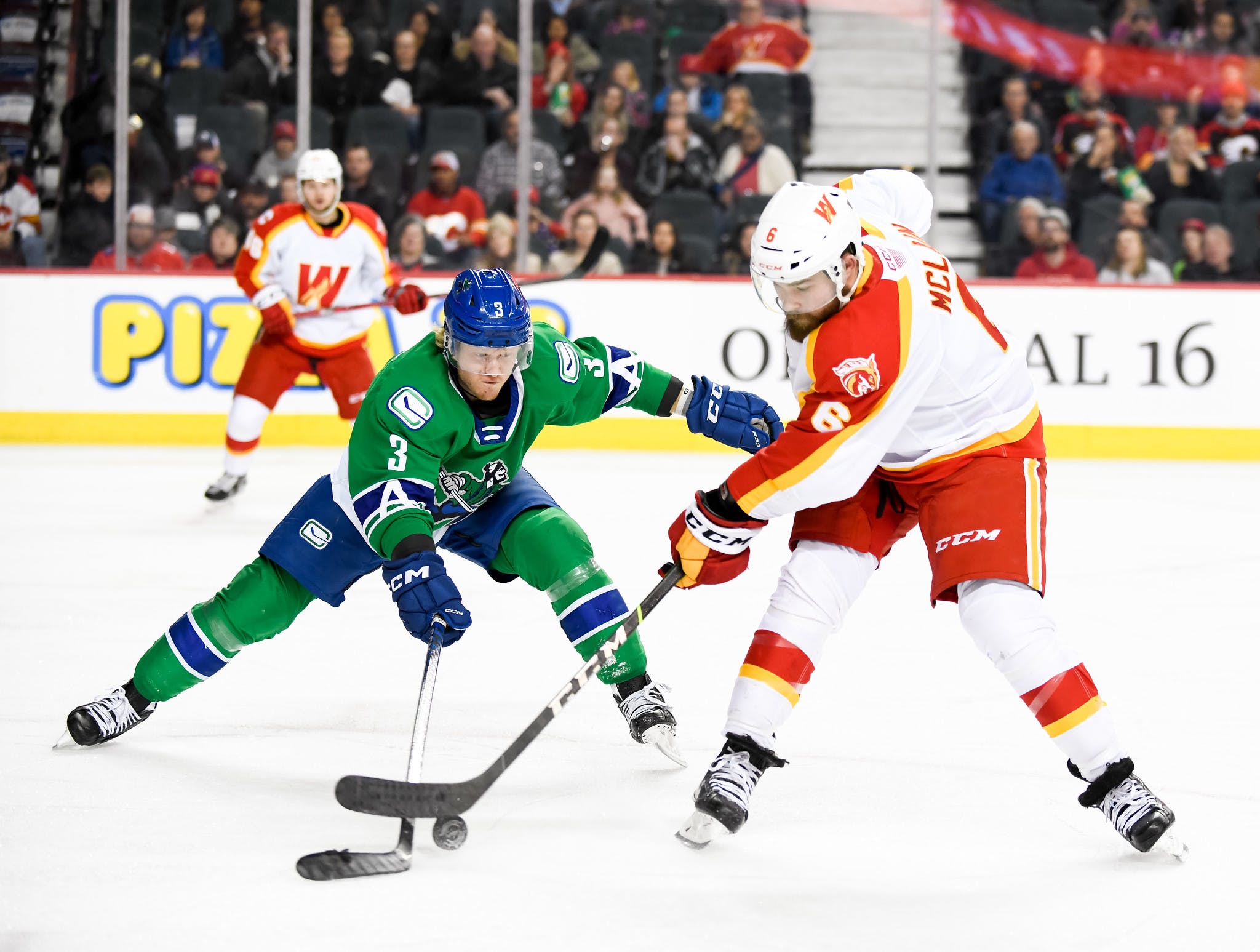 By Paige Siewert
4 days ago
The extended series between the Calgary Wranglers and Abbotsford Canucks came to a close on Saturday evening. The first two games earlier in the week resulted in overtime and shootout wins for the Wranglers, but this game broke the pattern and was decided in regulation. The Wranglers beat the Canucks 5-3 and swept this week’s series.

Calgary took an early lead in this game with a goal by Ben Jones just 43 seconds in. He entered the zone and just threw the puck at the net and managed to beat the Canucks netminder. Jones’ goal was unassisted.
The Canucks answered back 6:52 into the game with a power play goal on a 5-on-3 to tie things up. Those were the only two goals through the first 20 minutes but there were plenty of whistles with four Wranglers penalties and two Canucks penalties in the opening frame alone.
That was only the beginning of the penalty minutes with plenty more through the rest of the game and some heightened tensions causing some fights in the second and third periods.
The Wranglers briefly regained the lead with a goal from Mitch McLain 11:48 into the second period. He redirected Jeremie Poirier’s pass with his skate right into the net. Kevin Rooney also picked up an assist.
About a minute and a half after this goal, Adam Klapka got tied up in a fight with Alex Kannok Leipert to answer for a hit he put on a Canucks player. Despite Klapka’s size advantage, his opponent got the better of the fight and took him down by the end of it.
Later in the period, Connor Zary continued his hot streak and scored a power play goal 17:04 into the second. Zary finished a swift play off the face-off by ripping a one-timer past Arturs Silovs. Matthew Phillips and Ben Jones assisted on Zary’s fifth point in this series.
About a minute later, the Canucks scored their second goal of the night and the second period finished up with the Wranglers ahead 3-2 on the scoreboard. Abbotsford held the edge in shots after 40 minutes 27-19.
In the third, Cole Schwindt scored his 10th goal of the year off a set up from Dennis Gilbert to put the Wranglers up 4-2.
Schwindt’s goal came 12:50 into the third and gave the Wranglers some breathing room for the majority of the period. Abbotsford tried to get some momentum back later in the period by pulling their goalie but Brett Sutter scored on the empty net with 1:47 to go in regulation.
Another fight broke out before the end of the game and the Canucks were actually able to sneak one more goal in on the power play with 20 seconds to go. That was the extent of the scoring in this game and the Wranglers took a 5-3 win to complete the series sweep.
Dustin Wolf was in net for Calgary and stopped 32 of 35 Abbotsford shots. Calgary puck up 26 shots and scored on five of them. The Wranglers cleaned house on the three star recognitions in this game with Connor Zary picking up the third star, Dustin Wolf picking up the second star and Ben Jones earning the first star of the night.

The Wranglers are all done with their road trip and return home briefly for their next series. It’ll be a quick turnaround with their next game taking place on Tuesday night. They’ll play a back-to-back two-game series against the Ontario Reign on Tuesday and Wednesday nights. Both games are set to start at 7:00 p.m. MT at the Scotiabank Saddledome.
News
Recent articles from Paige Siewert