Recap: Wranglers down to 0–3 record after blowout loss in Colorado 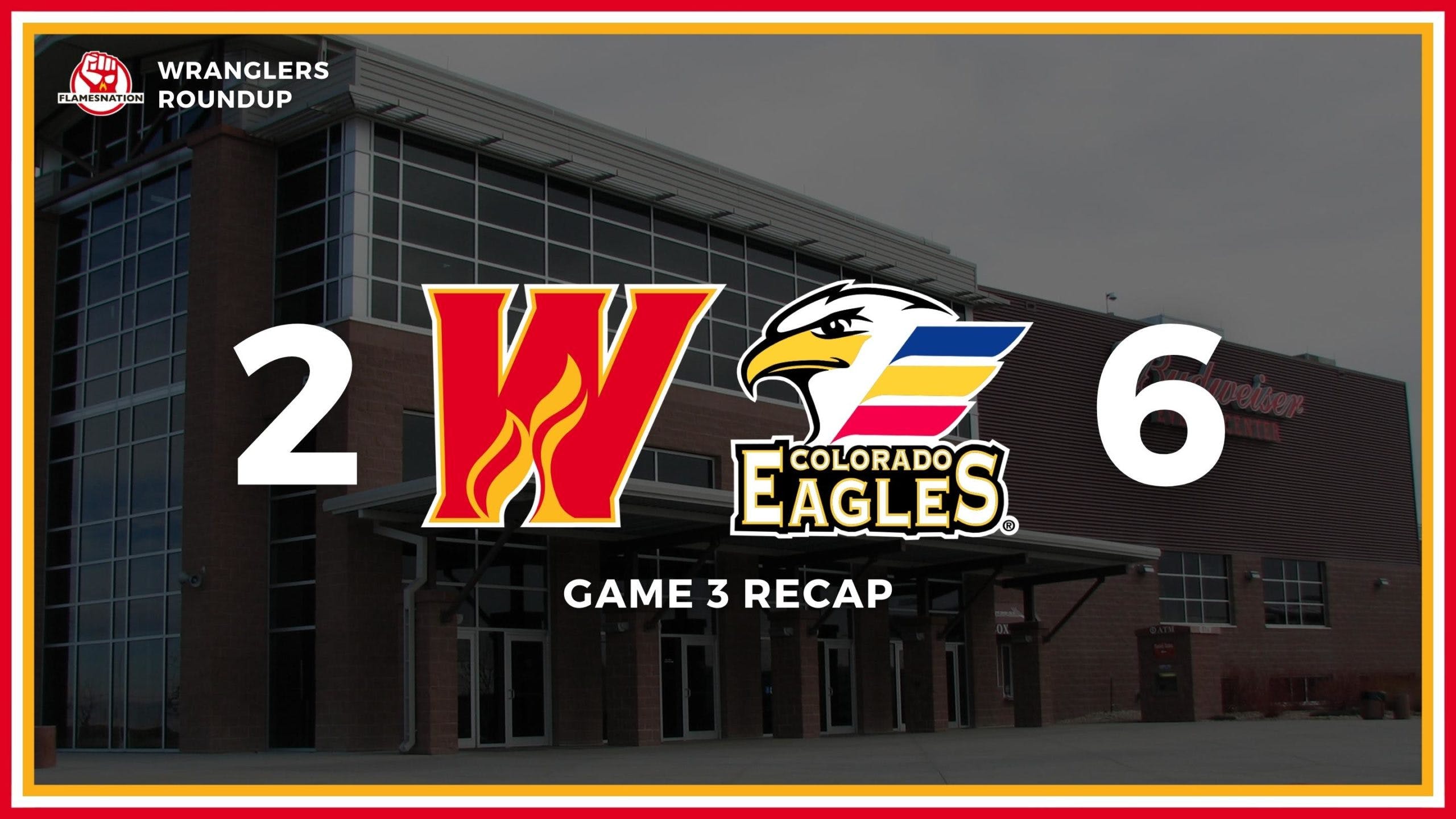 By Paige Siewert
3 months ago
The Calgary Wranglers hit the road this weekend for their first pair of away games this season. They travelled to play the Colorado Eagles for somewhat of a playoff rematch. Both teams look a little different this time around but the players that were here last season remember the Heat beating the Eagles three games to one in their 2021-22 playoff series. The intensity didn’t translate much as the Colorado Eagles walked all over the Wranglers and beat them 6-2 on Friday.

With the extra depth for Calgary, the lineup changes continued into this game. Adam Klapka was inserted back into the lineup after being swapped out last game and Oscar Dansk got the nod for his first start this season.
Colton Poolman also got his season debut on the blue line. To accommodate Klapka and Poolman, Nicolas Meloche and Emilio Pettersen were scratched from the lineup on Friday night. No further insight was provided into Meloche as to if his absence was injury related.

The energy in Loveland, CO was very much like the energy of the Wranglers first game. They hosted their home opener with a sold-out crowd on Friday and projected sell-out for Saturday. The whistles started very early with Brett Sutter being dealt an interference penalty right off the face-off.
It didn’t prove to be harmful at that point as the Wranglers killed that off as well as their next one. Dansk held it down in net and was playing with some good confidence early in this game. He stopped seven shots in the opening minutes but the eighth shot had him beat. Callahan Burke opened up the scoring for the Eagles 10:31 into the game.
The Wranglers bounced back from this goal after being out-shot for most of the period. By the end of 20 minutes, they lead the shot category 13-11.
The second period started to get a little out of control. Once the period hit the eight minute mark, things went downhill. Charles Hudon scored the Eagles second goal on the power play, Oskar Olausson scored the Eagles third at 9:08, and Charles Hudon scored again on the power play at 13:55.
Tough stretch for the Heat but after the third goal, Alex Gallant dropped the gloves for a heavy-weight tilt after the third goal to try and drum up some momentum in their favour. The Wranglers showed signs of life with 4:57 to go in the period when Radim Zohorna got on the board for a power play goal.
No goaltending changes were made by Calgary and they survived the period without burning their timeout. They finished up 40 minutes down 4-1 and up 25-21 in shots.
Oscar Dansk lead the team out for the third and it took the Eagles not even three minutes to make it 5-1. Later in the period, things got even uglier. Clark Bishop got caught up in some heated pushing and shoving after a whistle and took it way too far. He put three cross-check shots to his opponent’s face and paid the price in penalty time.
He left with a game misconduct and 15 minutes of penalty time tallied up. Adam Klapka served his time in the box. Alex Gallant also got caught up in this and was dealt a game misconduct. Ben Jones sat in the box for him for two minutes. The Wranglers could not escape this major without a Eagles goal and the score climbed to 6-1.
To pile on the bad news, Jakob Pelletier took an awkward fall into the boards and was down for quite some time. He was attended to by the athletic trainer and was escorted off the ice. He was not putting much weight on his left leg as he left the game. Tomorrow will determine how serious this is based on if he is in the lineup or not.
The Wranglers got one more goal for their dignity late in the game with Adam Klapka’s first goal as a Wrangler. He scored on the power play at 17:33. Nick DeSimone and Matthew Phillips picked up assists.
That concluded the scoring. Oscar Dansk played through this whole game in net stopping 24 of 30 shots. The Eagles goaltender, Justus Annunen, stopped 35 of 37 Wranglers shots.

The Wranglers have an opportunity to bounce back Saturday night in their rematch against the Eagles. When they are still working out the kinks, these tougher teams are going to be some character-building games. Not a lot is clicking at this point and no line is really dominating things for the Wrangles. Pospisil’s line shows signs of life but not much is coming to fruition.
The Wranglers have got to be starting to get frustrated and should be digging deep going into Saturday’s game after starting the season 0-3-0. They will continue their series in Colorado with a 7:05 p.m. MT puck drop.
News
Recent articles from Paige Siewert