Should Jacob Markstrom or Dan Vladar start on Saturday against Edmonton? 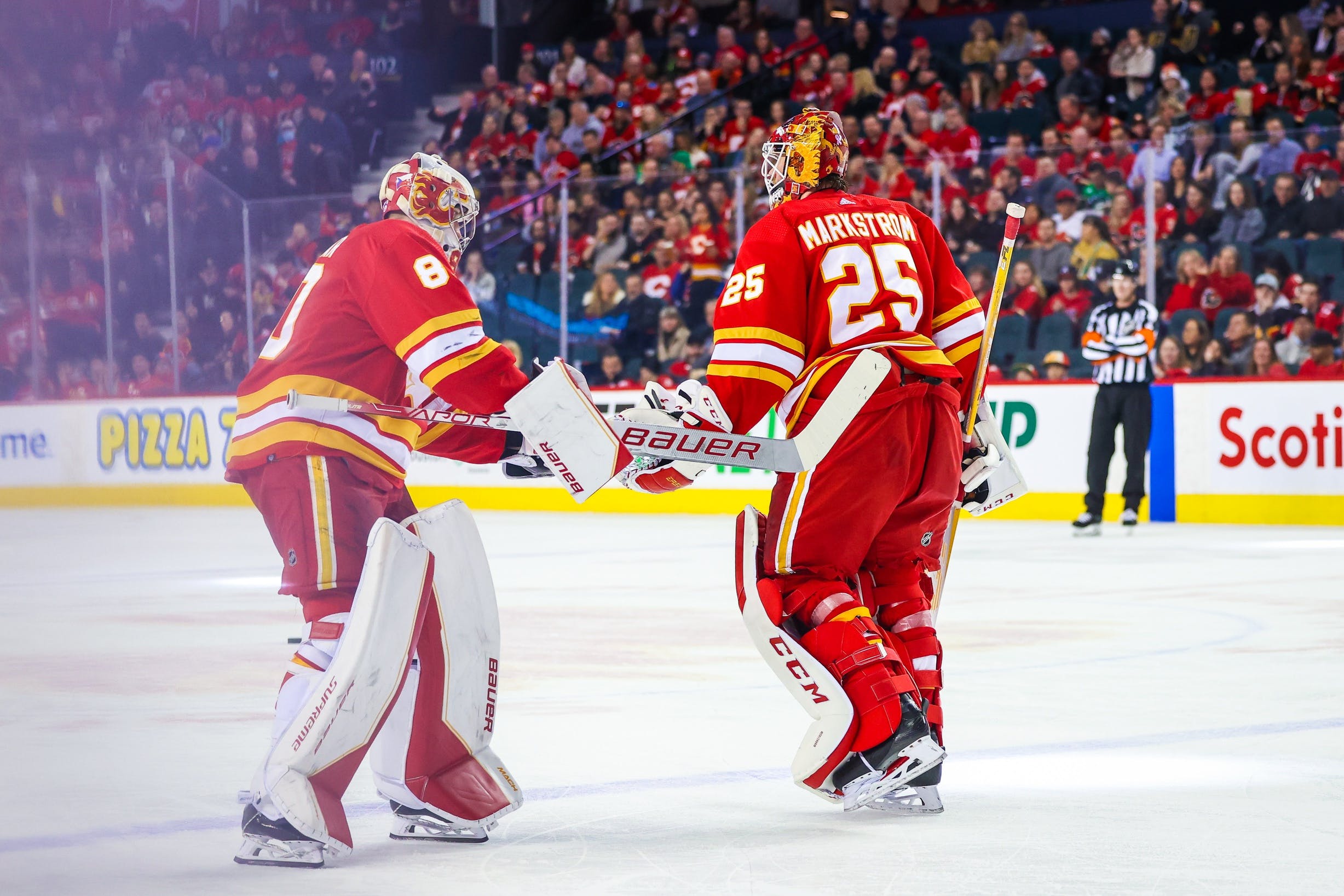 By Ryan Pike
3 months ago
This article brought to you by NHL Lines site Betway!
I don’t know if you’ve heard about this, folks, but the Calgary Flames are playing the Edmonton Oilers in a hockey game on Saturday night. It’s the second such clash between these two teams in the month of October, coming on the heels of a pretty contentious playoff Battle of Alberta in the spring.
Heading into such a big game, of course Calgary’s goaltending is a big topic of conversation. More specifically, which goaltender should start against the Oilers: backup Dan Vladar or starter Jacob Markstrom?

The case for Jacob Markstrom

Markstrom is the Flames’ highest-paid goaltender and also their best one. He finished second in Vezina Trophy voting last season, and was voted a second-team all-star by the Professional Hockey Writers Association (myself included) last season. The only goaltender better than him in 2021-22, by consensus, was New York Rangers ‘tender Igor Shesterkin.
The two primary directives for the Flames in the regular season are (a) making the playoffs and (b) getting the team ready to kick butt in those playoffs. Based on both those directives, getting their top goaltender feeling confident in his game is huge. After a couple strong efforts against Carolina and Pittsburgh, what better way to get Markstrom playing with swagger than with a game against the Oilers, a team he’s historically struggled against.

It’s been documented, but the Oilers are essentially the only NHL team Markstrom doesn’t have great games against. With these two clubs potentially on a playoff collision course, it would be helpful if Markstrom could slay that dragon and have a positive game to look back on when preparing for any future playoff Battle of Alberta. If you want to quiet any tittering about Markstrom having the “Oilers flu” earlier this month, this is a great time to do it.
Long story short: he’s your top guy, you should use him. Saturday night clashes against the Oilers are precisely why you sign Markstrom for the term and money he’s signed for.

The case for Dan Vladar

While Markstrom is The Guy for the Flames in net, and will be for awhile, Vladar has proven himself to be a really capable understudy. He was trusted to play the Oilers in the first Battle of Alberta, and in a tough building for the Flames to play historically, he got the W and played quite well.
Sure, getting Markstrom back to his prior lever of swagger is important, but the Flames have a unique balancing act on their hands. With a busy November coming up, giving Vladar a game or two before the schedule gets crazy will be important to keeping him engaged and sharp. Why not use Vladar in a game against a team Markstrom doesn’t usually do well against and give Vladar a second shot to shine against Edmonton?

Based on how the Flames have juggled their goaltending lately, the Edmonton game feels like a Jacob Markstrom start. Sure, head coach Darryl Sutter is aiming to get Vladar a start per week, but that’s a projected average most likely, not a strict rule. Getting Markstrom back to his Vezina Trophy contender levels of play and swagger is the important part, especially with Vladar showing last season that he can be really good even if used sparingly.
Markstrom needs reps to get his game going, and a big test against Edmonton could be huge for his game and his confidence.
Editorials
Recent articles from Ryan Pike