Speculating about a Sean Monahan trade with Columbus 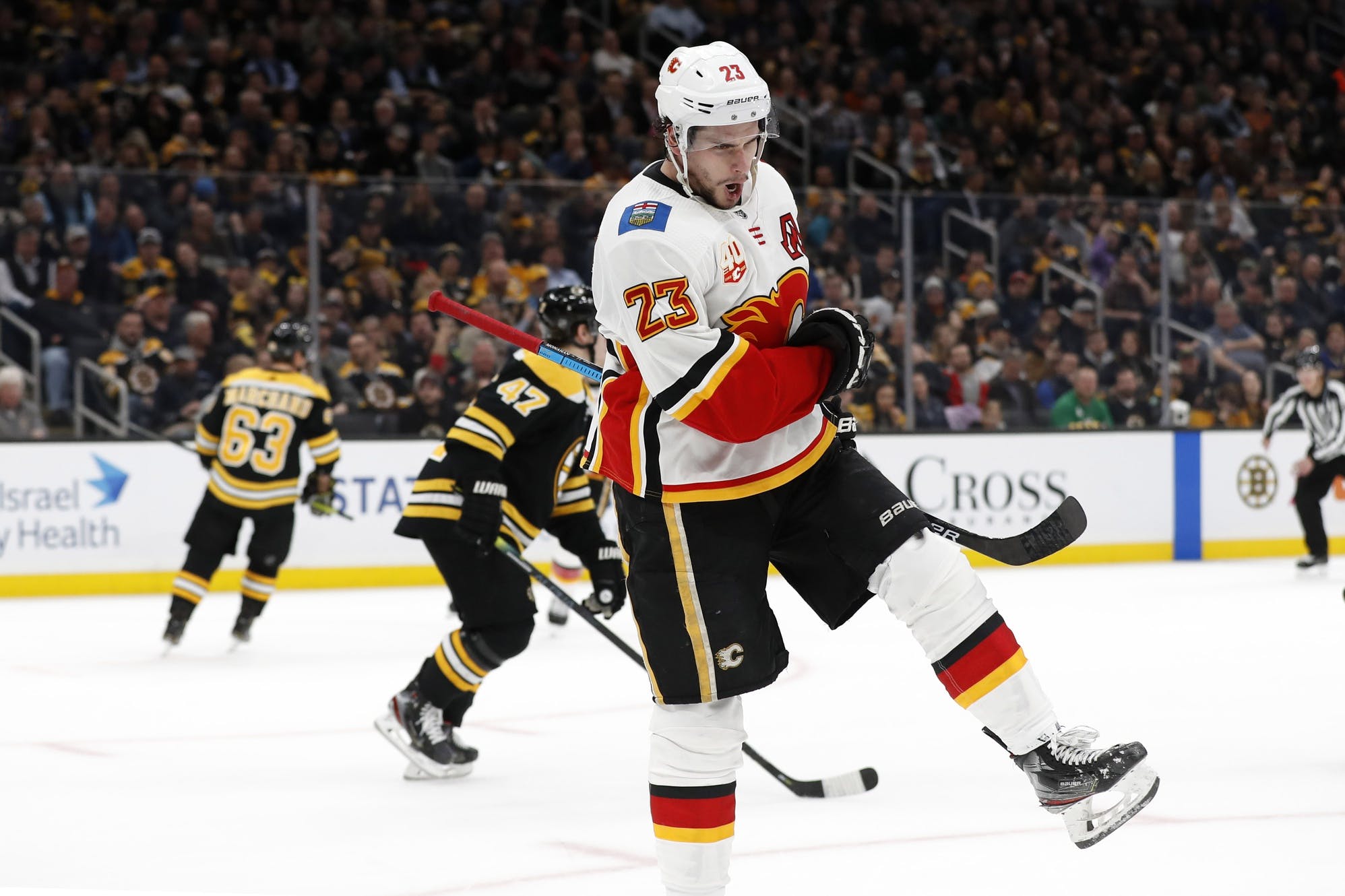 By Mike Gould
1 year ago
It appears the Columbus Blue Jackets are in the market for another centre.
The Athletic‘s Blue Jackets beat writer Aaron Portzline reported Friday the club’s desire to add talent down the middle has intensified following a shoulder injury to 26-year-old forward Max Domi.

Domi, 26, underwent surgery on his right shoulder Thursday to repair a labral tear, the Blue Jackets announced. He’s expected to miss five to six months, which means he’ll miss at least the first month of the 2021-22 season.
“Max had been experiencing some discomfort in his shoulder, which he brought to our attention last week, and a subsequent examination revealed a labral tear,” Blue Jackets general manager Jarmo Kekalainen said in a statement.
[…]
Kekalainen already said one of his offseason priorities was to shore up the Blue Jackets down the middle. Now it’s an absolute must.

Domi scored nine goals and added 15 assists in 54 games with the Blue Jackets last season. He averaged 15:13 per game and typically lined up as a centre for John Tortorella’s team, although Portzline added it is unclear what position Domi might play under the Blue Jackets’ next head coach.
With Domi slated to miss a significant chunk of time in 2021–22, the Blue Jackets’ centre depth chart appears relatively thin.
The Blue Jackets have a few solid centre prospects, such as Tyler Angle and Josh Dunne, but lack much in terms of depth or high-end skill in their system. Foudy and Texier are the two most heralded young pivots in Columbus’ pipeline.
With Seth Jones reportedly unwilling to negotiate an extension and Patrik Laine’s first season in Ohio having been marred by inconsistency and benchings, Columbus’ future looks uncertain. Roslovic and Zach Werenski will both need new contracts as RFAs after the 2021–22 campaign; both Joonas Korpisalo and Elvis Merzlikins will be unrestricted free agents that summer.
Would trading Jones purely for futures signal a rebuild in Columbus? If so, how would that square with giving up assets to acquire another centre?
Laine has insisted he wants to remain in Columbus. Kekalainen has indicated his desire to sign Werenski to a long-term extension this summer. Leading scorer Oliver Bjorkstrand is under contract until 2026. With those three pieces in the fold, the Blue Jackets have a decent young base around which they could maneuver.
Even without trading Jones, the Blue Jackets have three first-round picks in the 2021 NHL Entry Draft. One of those selections originally belonged to the Tampa Bay Lightning, last year’s Stanley Cup champion and one of the odds-on favourites to emerge on top in this season’s playoffs.
With Tampa’s pick figuring to be late, would it make sense for Columbus to dangle it in a potential trade for a player like Sean Monahan?
Monahan, 26, is coming off the two worst years of his career. He scored just 10 goals and 28 points in 50 games this year and was eventually shut down to undergo hip surgery. Evolving-Hockey judged Monahan’s performance in 2020–21 as being worth only 0.7 total expected goals above replacement (xGAR).
In 2019–20, Monahan scored 22 goals and 48 points in 70 games but only provided 0.3 xGAR and was one of the Flames’ worst defensive players. He took a sizeable step forward in his own end this season but saw the quality of his offensive play decrease precipitously.
Monahan scored at least 22 goals in each of his first seven NHL seasons, topping out at 34 goals and 82 points during the Flames’ 107-point 2018–19 season. He has two years remaining on a deal paying him $6.375 million, on average, per season.
His contract also features a 10-team no-trade clause.
Columbus’ lineup features more than a few skilled wingers in need of talented centres. Bjorkstrand and rookie Yegor Chinakhov are high-end distributors of the puck; Cam Atkinson and Laine (and Bjorkstrand, for that matter) are great shooters.
The Blue Jackets also project to have plenty of cap space, even without placing Domi on long-term injured reserve.
Columbus Blue Jackets players signed through 2021–22:
Forwards (10) — Cam Atkinson, Max Domi, Oliver Bjorkstrand, Gustav Nyquist, Boone Jenner, Jack Roslovic, Eric Robinson, Yegor Chinakhov, Emil Bemstrom, Nathan Gerbe
Defense (6) — Seth Jones, Zach Werenski, Vladislav Gavrikov, Dean Kukan, Scott Harrington, Gabriel Carlsson
Goaltenders (2) — Joonas Korpisalo, Elvis Merzlikins
RFAs — Patrik Laine, Alexandre Texier, Kevin Stenlund, Kole Sherwood, Andrew Peeke
The majority of Columbus’ lineup is locked up for next season, with Laine’s upcoming contract being the only major outstanding negotiation. The above 18-player lineup, plus Alexander Wennberg’s $441,677 buyout hit, costs just $55,688,362 and comes in nearly $26 million below the NHL’s $81.5 million salary cap.
In short: Columbus should have a ton of cap space to work with this summer and likely would be able to absorb Monahan’s entire cap hit. He would address a need for them and might be a viable “buy low” candidate, from Kekalainen’s perspective. If Monahan rebounded in Ohio, the Blue Jackets could attempt to extend him; failing that, they could likely flip him at a later date to try and recoup the acquisition cost.
Why would Calgary do it? Trading Monahan for futures would allow the Flames to strengthen their base of future assets while freeing up room to potentially sign Johnny Gaudreau, Matthew Tkachuk, and/or Andrew Mangiapane to contract extensions.
A Monahan trade could give the Flames more draft capital to use (both in terms of making selections and trades) while enabling them to add a different player to their lineup without having to send out any financial commitments of their own.
Do you think Sean Monahan should be traded? If so, to where? Share your thoughts in the comments!
Uncategorized
Recent articles from Mike Gould