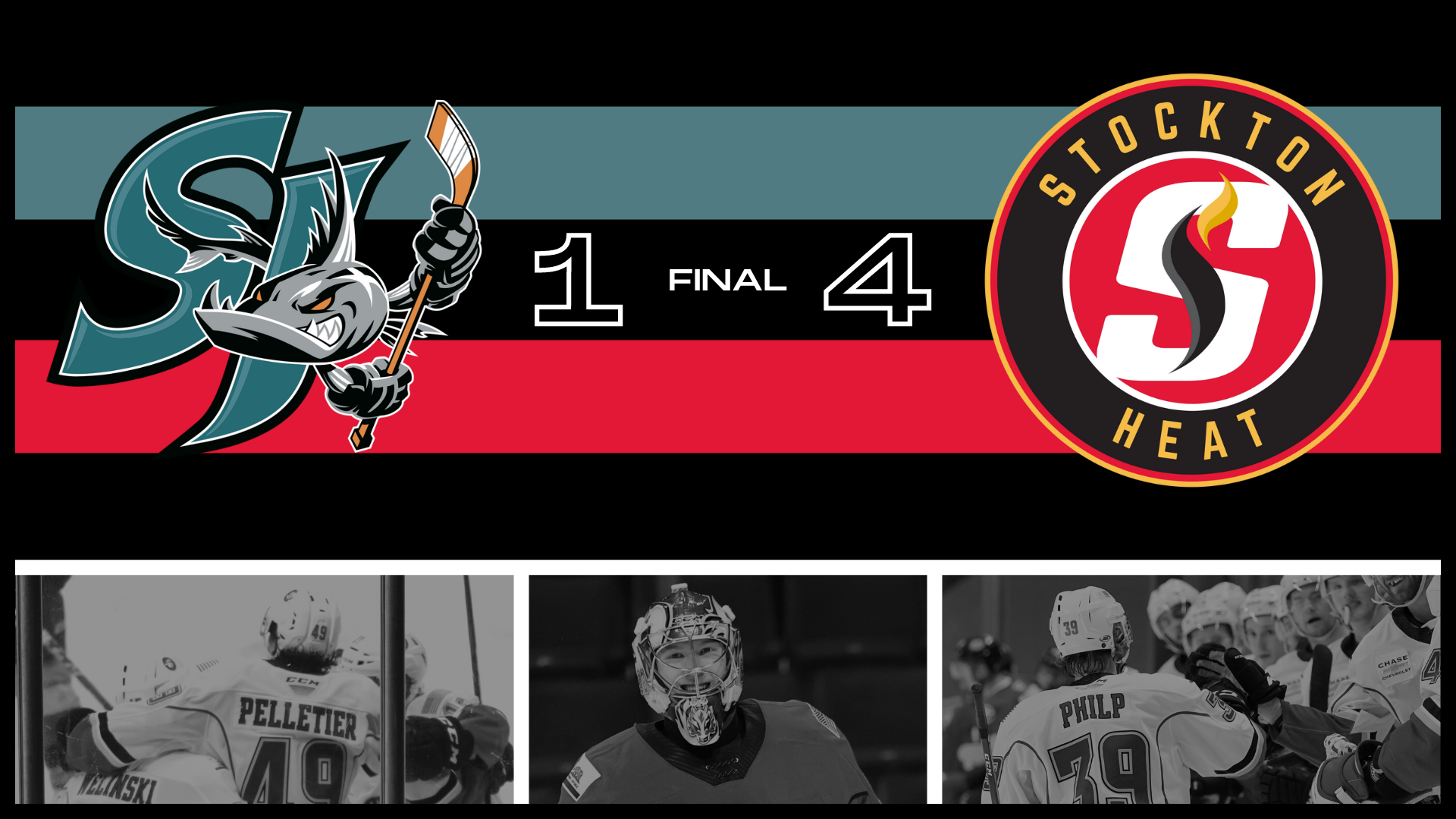 By Paige Siewert
1 year ago
The Stockton Heat’s battle for vengeance on Sunday was successful as they follow up their Friday night 4-0 loss against the San Jose Barracuda with a 4-1 victory. Four different Heat skaters we among the goalscorers and Dustin Wolf added another win to his unbelievable regulation win record.

The Heat came out of the gate guns blazing, putting up 19 shots in the first period and scoring on two of them. They weren’t a fan of dropping a game on home ice on Friday and thought it would be only fair if they returned the favour. Alex Gallant kicked off scoring for the Heat with an unassisted goal a mere 2:04 into the period after Ryan Olsen gave him some room on the ice with a monster hit behind the Barracuda net.
Later in the first, Connor Zary was on the receiving end of a high stick and drew a double minor high sticking call to put the Heat on the power play for the first time in this game. Luke Philp buried a rebound on this power play to put the Heat up 2-0. This goal was assisted by Martin Pospisil and Nick DeSimone.
In the second period, Jakob Pelletier found his way on the scoreboard for the first time since the Christmas break. Pelletier has still yet to go more than two games this season without at least earning a point. His goal came 7:52 into the second period and was assisted by Matthew Phillips and Colton Poolman. He was left on his own after a nice Heat clearing attempt and gave Barracuda goaltender Adin Hill no chance at stopping him.
The second period would end with the Heat comfortably ahead 3-0 and leading 30-19 in shots. The Barracuda would get one back just past the midway point in the third and rob Dustin Wolf of his shutout. It was a goal Wolf would definitely want back as the rebound was weakly flipped over his left pad.
That wouldn’t hurt the Heat much as that was all they would see from the Barracuda on the scoring side of things. Their opponents pulled their goalie with 2:11 to go in regulation and Justin Kirkland took about a minute before scoring the Heat’s fourth goal of the night on the empty net.
Dustin Wolf was given the first star of the night due to his 33 save performance. Pelletier was also recognized, just as third star of the night.

The Heat’s PK once again had a very strong showing in this game. They killed 5 of 5 Barracuda power plays and further added to their league-leading penalty kill. After this game, the Heat’s penalty kill sits at 91.2% as they have only allowed nine power-play goals all season. Remember too, they’re already 25 games in so that makes this even more impressive. No other team in the AHL has allowed fewer power-play goals.

A split series against the Barracuda didn’t change things on the standings for the Heat much. They are still the best in the Pacific Division and the best in the whole Western Conference. In overall league standings, they still just barely sit below the Utica Comets.
The Comets only have one regulation loss on the season and their winning percentage sits just .66 points higher than the Heat’s.

The Heat are back to their regular scheduled three to four games a week and this upcoming one will be a busy one. Sunday’s game was the beginning of a seven-game road trip that will go on until January 15th. They play back to back on Tuesday and Wednesday night and again on the weekend on Friday night and Sunday afternoon.
Their mid-week series will take place in Tucson against the Roadrunners with both games starting at 6:30 p.m. MT. When they return to California on the weekend, their Friday night game will be against the San Diego Gulls at 8:00 p.m. MT and Sunday’s game will be at the Ontario Reign at 4:00 p.m. MT. There will be lots of Heat hockey to watch and games will be available for streaming on AHL.tv.