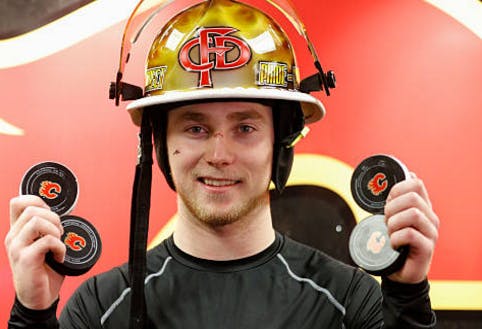 By Zach Laing
1 year ago
Welcome back to another edition of Throwback Thursday!
This week in 2016 (Jan. 13), Sam Bennett became the youngest member of the Calgary Flames to score a hat trick at 20 years old.
It came in a 6-0 win for the Flames on home ice at the Saddledome and saw Bennett tally four goals. His first of the night game less than a minute into the game with Jiri Hudler and Dougie Hamilton getting the assists.
He piled up two more in that first frame at the 12:01 mark (assists to Mikael Backlund and Hamilton) and the 17:01 mark (assists to Deryk Engelland and Josh Jooris), respectively.
For good measure, he piled on a fourth in the last minute of the game scoring at the 19:35 mark of the third, assisted by Hudler.
It’s still the only hat trick Bennett has scored in his career.
On Twitter: @zjlaing
Uncategorized
Recent articles from Zach Laing