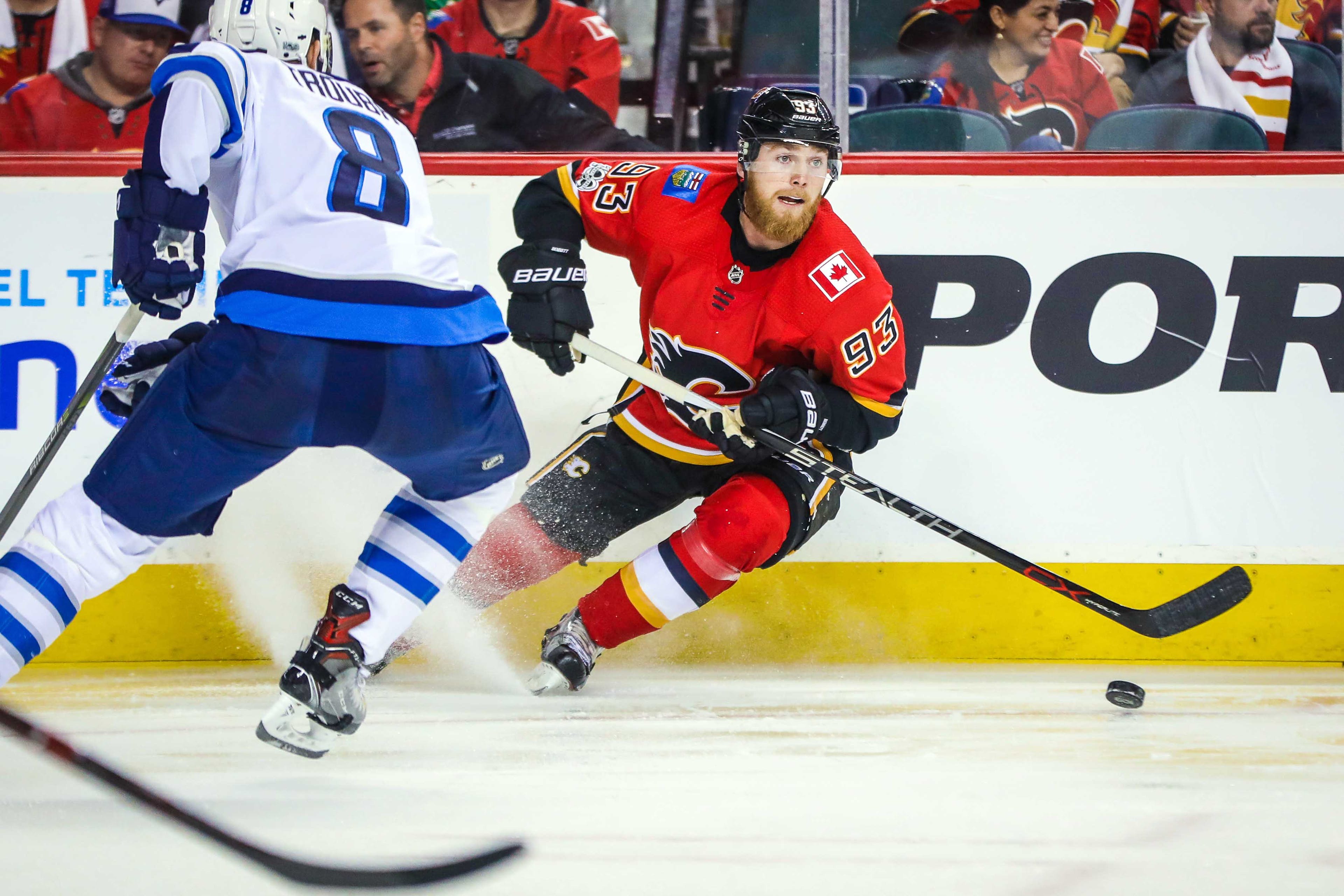 By Mike Gould
1 year ago
Odds are, a former Calgary Flame’s name will be engraved on the Stanley Cup this season.
We do know it won’t be Mike Smith, Kris Russell, James Neal, or Alex Chiasson. Their current team, the Edmonton Oilers, was eliminated early on Tuesday morning after a triple-overtime loss to the Winnipeg Jets. Bring out the brooms! (We talked about both those teams in part one).
The St. Louis Blues — also mentioned in part one — are the only other 2021 playoff team currently watching from the sidelines. The Jets, the Colorado Avalanche, and the Boston Bruins are the three teams already waiting to meet their opponents for the second round.
Six of the eight teams listed below, from the Central and East Divisions, are still embroiled in their first-round battles. Let’s take a closer look.

Ever heard of Sam Bennett? The Florida Panthers sure have. Bennett’s most explosive NHL game came against the Cats in 2016.
Five years later, Florida pulled the trigger on a deal to acquire Bennett from Calgary for a second-round pick and prospect Emil Heineman. The trade immediately paid dividends for the Panthers as Bennett finished the regular season with six goals and 15 points in 10 games.
Is that level of production sustainable? Probably not. Will Bennett generally be more productive in Florida than he was in Calgary? That doesn’t seem too far-fetched. Bennett has a goal and four assists in four playoff games so far, having missed the third game of Florida’s series against Tampa Bay while serving a suspension for charging Bolts forward Blake Coleman.
Florida’s Flames connections don’t end there. Ryan Lomberg spent parts of five seasons in the Flames’ organization, accumulating 11 NHL games (and a lot of lopsided fight appearances) along the way, before signing a two-year deal with the Panthers as a UFA last fall.
Lomberg spent most of the regular season on Florida’s NHL roster, playing 34 games and scoring four points (two goals, two assists). He’s played all five of Florida’s postseason games, scoring the overtime winner in game three.
Florida’s bottom-six also features three former Flames development camp invitees. Mason Marchment, Noel Acciari, and Frank Vatrano all appeared in the Flames’ summer silks during the 2010s; now, in 2021, they’re all mainstays on the best Panthers team in 25 years.

The other combatant in the Battle of Florida boasts a much smaller contingent of former Flames.
Only backup goaltender Curtis McElhinney qualifies as a representative of the flaming “C” alumni. McElhinney’s name was engraved on the Stanley Cup last year after he played 18 regular-season games (but none in the playoffs) for the 2019–20 Bolts.
Now in the back half of a two-year deal, McElhinney played 12 games for Tampa this season and went 4-6-2 with an .875 save percentage. The 38-year-old goaltender played parts of three seasons with the Flames between 2007–08 and 2009–10 before going on to play with Anaheim, Ottawa, Phoenix, Columbus, Toronto, Carolina, and the Lightning.

Dougie Hamilton was a very, very good defenseman for the Calgary Flames and has become even better since being traded to Carolina.
The Hurricanes are currently tied two-to-two with Nashville in their first-round playoff series. If they want to win, Hamilton will undoubtedly play a massive role in helping them do so. His play has been worth a total of 20.6 expected goals above replacement (xGAR) over the last two seasons, combined.
Hamilton has 82 points (24 goals, 58 assists) in his last 102 games with the ‘Canes. He has one assist through four playoff games this season, noticeably missing his assignment on Luke Kunin’s double-overtime game-winning goal in game four.
Former Flames farmhand Drew Shore is also currently in Carolina’s organization. He played four regular-season games with the ‘Canes but has yet to suit up in the postseason.

You’d be forgiven if you didn’t recognize Josh Healey‘s name.
The 26-year-old defenseman spent parts of three seasons in the Flames’ organization before leaving, as an un-qualified RFA, to sign with the Predators organization in 2019. He spent the 2019–20 season on an AHL-only deal before being signed to a two-way NHL contract for the 2020–21 season.
In the relatively unlikely event Nashville goes all the way this season, Healey will be the lone player with Flames ties to earn a Cup ring. Predators general manager David Poile also spent five seasons (three in Atlanta, two in Calgary) as Flames assistant GM between 1977–78 and 1981–82.

Austin Czarnik is something of a prototypical “quadruple-A” player. He’s been an elite AHL scorer in both Providence and Stockton and likely would have done the same in Bridgeport this season had he not spent most of the year stuck on the Islanders’ taxi squad.
Czarnik is in the first season of a two-year deal with New York. He played just four games in the Islanders’ organization this season, all in the NHL, and failed to record a point. If the Islanders get hit by injuries up front, Czarnik could step into a role on the power play.

Mark Jankowski may not be the best player from the 2012 NHL Entry Draft, but he’s still in the NHL nine years after being selected 21st overall by former Flames GM Jay Feaster.
Jankowski scored 11 points (four goals, seven assists) in 45 games this season; he has yet to make an appearance in the playoffs. With the Penguins now on the brink — down 3-2 to the Islanders — it’s possible we could see head coach Mike Sullivan shuffle Jankowski into the lineup to shake things up.

The Washington Capitals’ season is over. After winning game one of their first-round series against the Boston Bruins, the Caps lost four-straight games and now have nothing standing between them and the upcoming expiry of Alexander Ovechkin’s contract.
Garnet Hathaway is now halfway through his four-year UFA deal with the Capitals. The former Flames fan favourite has carved out a solid niche in Washington’s bottom-six, scoring two goals and three points in the Caps’ five-game loss to the Bruins.
The Flames drafted Craig Anderson in the third round of the 1999 draft. He never played a game for them; 22 years later, he’s still in the NHL. Anderson posted a .915 save percentage in four regular-season games in Washington before suiting up for two playoff games, winning one and losing the other in overtime.
Anderson turned 40 on May 21. Is this it for him?

The Flames traded a second-round pick for Curtis Lazar back in 2017. It did not go particularly well, as Lazar scored just three goals in 71 games spread over three seasons with the Flames before leaving as an unrestricted free agent.
Lazar signed a contract with the Buffalo Sabres in 2019 and quickly emerged as a solid bottom-sixer for them, scoring 10 points (five goals, five assists) in 38 games before being re-signed to a two-year deal. The Bruins acquired Lazar from Buffalo at the 2021 trade deadline as part of the deal that ended Taylor Hall’s disastrous Sabres tenure.
It’s hard not to root for Lazar, who’s consistently been one of the NHL’s most charming characters throughout his career. Just make sure to protect him from any hamburger projectiles.
Uncategorized
Recent articles from Mike Gould