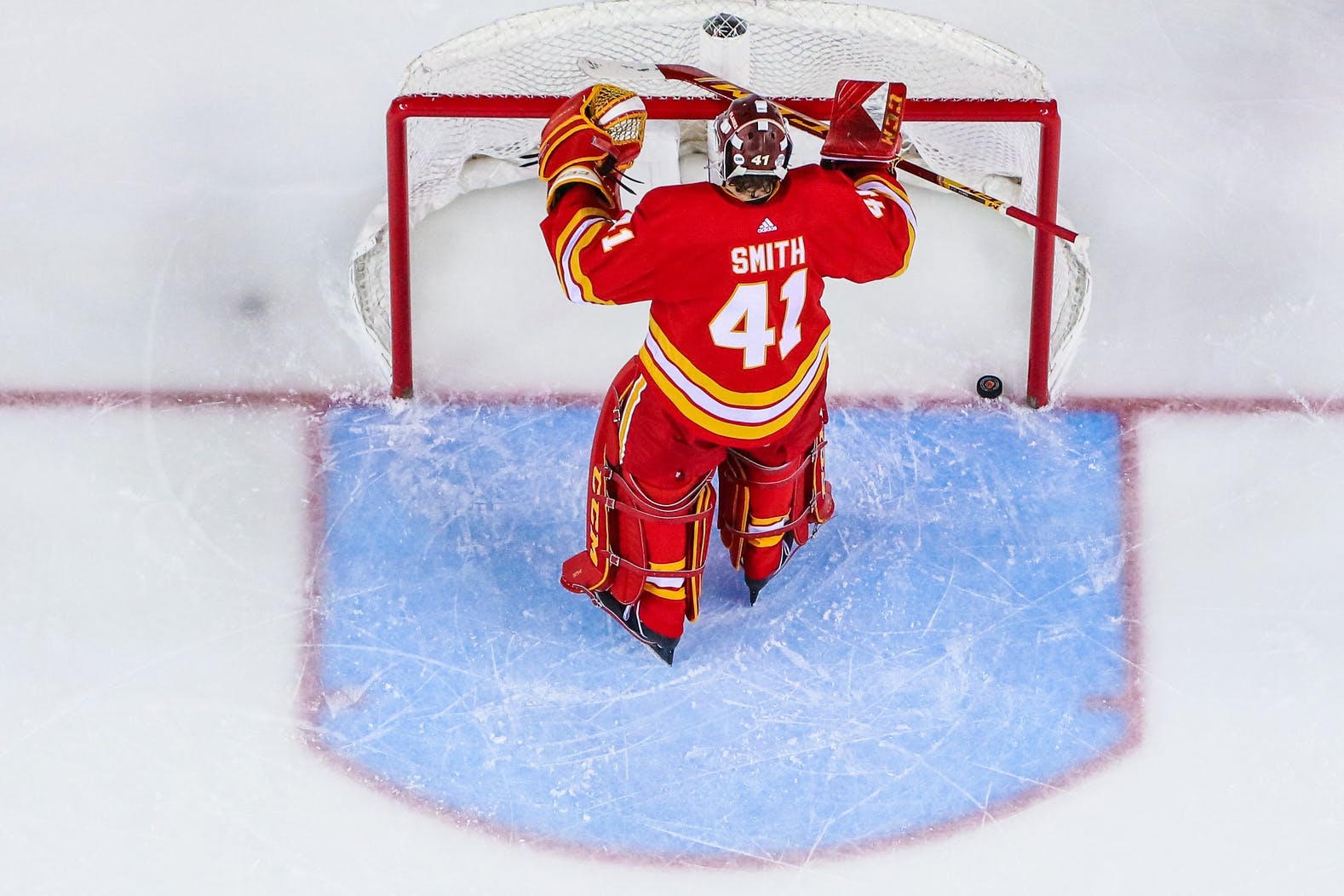 By Mike Gould
1 year ago
In case you hadn’t already heard: Johnny Gaudreau and his Calgary Flames team will not play for the Stanley Cup this year.
That doesn’t mean Calgary’s influence is completely absent from the 2021 playoffs.
Numerous former Flames players—and even more with tangential connections to the organization—will compete for this season’s championship.
There’s a very good chance the 2021 Stanley Cup winner will feature at least one player previously employed by or attached to the Flames in some capacity, big or small.
Some of these players are top-pairing defensemen. Others are depth forwards and backup goaltenders. Regardless of their roles, all the winning players will have their names engraved on the most prestigious trophy in hockey.
Let’s take a closer look at the ex-Flames vying to get their names on the Stanley Cup. This is the first part, covering the North and West Divisions, of a two-part series.

The Oilers are currently facing elimination, having lost three consecutive games to start their series against the Winnipeg Jets. Former Flames goaltender Mike Smith has been in Edmonton’s crease for all those losses, notably giving up a very soft goal to Paul Stastny to seal the second game for Winnipeg before allowing four unanswered goals in game three.
James Neal appeared in the Oilers’ first two playoff games and, much like in his postseason tenure with the Flames, failed to record a point. The same goes for Alex Chiasson, who spent the 2016–17 season as a Flame.
2015 Flames playoff stalwart Kris Russell is recovering from a lower-body injury and has yet to appear in this year’s playoffs. Former Flames farmhands Alan Quine and Adam Cracknell are both currently in the Oilers’ system and could be options if their new team comes back from the deficit against Winnipeg and goes on to make a run.

The Jets’ contingent of former Flames is relatively small.
Calgary fans will remember defenseman Derek Forbort from the 2020 playoffs. Flames general manager Brad Treliving acquired Forbort from the Los Angeles Kings for a fourth-round pick at the 2019–20 trade deadline; he went on to play a total of 17 games in the flaming “C” down the stretch before signing with the Jets as an unrestricted free agent in the fall.
Laurent Brossoit has yet to make an appearance for the Jets in the playoffs. Former Flames GM Jay Feaster selected Brossoit in the sixth round of the 2011 NHL Entry Draft, but the goaltender never played a game in Calgary. Early in the 2013–14 season, the Flames traded Brossoit and Roman Horak to Edmonton in exchange for Ladislav Smid and Olivier Roy.
Brossoit eventually wound up in Winnipeg as a UFA and has been a reasonably competent backup option for the last three seasons, posting a .918 save percentage in 14 games this past year.

Chris Tanev has been a fantastic addition for the Flames, but there’s no denying the team misses TJ Brodie‘s presence on the back-end. Brodie signed with the Maple Leafs as a UFA last fall and emerged as one of their steadiest and most important players in his debut go-round with the club. Through two playoff games in Toronto, Brodie has yet to pick up a point.
David Rittich hasn’t been a Maple Leaf for very long, only having been traded from Calgary at the 2021 deadline. He made four appearances with the Leafs down the stretch, posting a 1-1-1 record to go along with an .888 save percentage. The Leafs have yet to call upon him in their series against Montreal (which is currently tied at one).
Kenny Agostino, who the Flames acquired way back in 2013 as part of the Jarome Iginla trade with Pittsburgh, is now a star AHL forward with the Toronto Marlies and one of the Leafs’ “Black Aces.” 2018 Flames training camp invitee Scott Sabourin is also now an option in Toronto.

The Canadiens are positively loaded with ex-Flames. Paul Byron, of course, scored the game-winning goal in Montreal’s 2-1 series-opening victory over Toronto on Friday.
Brett Kulak has also been a fixture in the Canadiens’ lineup through the first two games of the series, having initially been acquired from the Flames on the eve of the 2018–19 season in exchange for AHL defensemen Rinat Valiev and Matt Taormina.
The rest of Montreal’s Calgary alumni fall squarely into the “depth” category. Michael Frolik was once a dependable two-way second-line forward with the Flames; now, he’s purely a reserve forward for the Habs and has watched both of the first two games from the press box.
Erik Gustafsson became a Canadien at the 2021 trade deadline for the minuscule cost of a 2022 seventh-round pick. He subsequently recorded two assists in five regular-season games with Montreal but has sat on the sidelines in the playoffs, thus far.
Defenseman Corey Schueneman technically isn’t an option for the Canadiens in this postseason, but the 25-year-old former Stockton Heat standout inked a one-year entry-level deal with Montreal (taking effect in the 2021–22 season) back on Apr. 2.

If you’re looking to bandwagon a team on the basis of cheering for former Flames, the Avalanche are not the team for you.
At least Cale Makar is from Calgary?

The Blues are done. Colorado completed its four-game sweep against St. Louis with a 5-2 victory on Sunday. We’ll still look at the Blues’ crop of ex-Flames for completion’s sake.
Remember Jon Gillies? He’s St. Louis’ third-string goalie and is currently sitting behind Jordan Binnington and Ville Husso on the depth chart. The 27-year-old netminder spent most of the season on the Blues’ taxi squad but managed to get into five AHL games with the Utica Comets, posting a .902 save percentage.
Beyond Gillies, Jordan Kyrou is the closest the Blues get to having a Flames alumnus. While Kyrou’s rights never belonged to the Flames, per se, the Blues did select him with Calgary’s 2016 second-round pick (35th overall).
Calgary traded that pick to St. Louis in exchange for goaltender Brian Elliott. Kyrou scored 35 points (14 goals, 21 assists) in 55 games with the Blues this year and followed that up with one goal in four playoff games against the Avalanche.

With Deryk Engelland no longer in the picture, the Golden Knights have exactly zero former Flames players on their roster.
Much like the Avalanche, the closest the Knights get to having a Cowtown connection is through a birthplace. Third-string goaltender Logan Thompson, who obliterated the AHL as a rookie this season with a 16-6-1 record in 23 games and a league-leading .943 save percentage, hails from Calgary and got his start playing in the city’s minor hockey system.

Vegas’ quarterfinal opponents boast deep Flames ties. Wild starting goaltender Cam Talbot has won just one of his four playoff starts since signing in Minnesota but has paired that record with a .921 save percentage.
In 2019–20, Talbot formed a tandem with David Rittich in Calgary and eventually started all 10 of the Flames’ playoff games. He posted a 5-4 record and a .924 save percentage as the Flames bowed out in the first round against the Dallas Stars.
Minnesota’s roster also features ex-Flames defenseman Matt Bartkowski, who spent parts of two seasons in Calgary before signing with the Wild in 2018. “Bart” played one regular-season game with the Wild in 2020–21 but has yet to appear in this year’s playoffs.
Uncategorized
Recent articles from Mike Gould