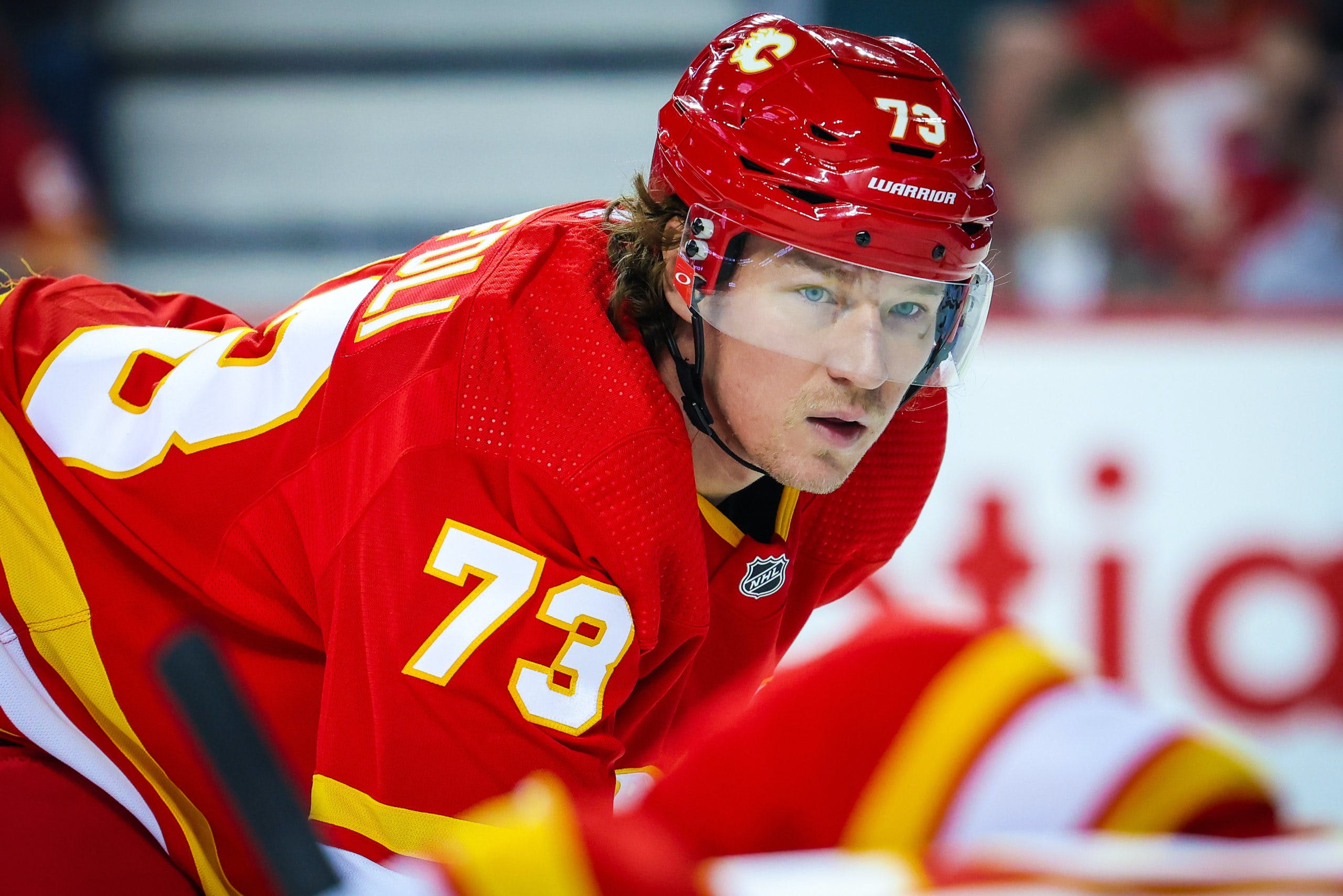 By Pat Steinberg
1 month ago
There were plenty of candidates when selecting the most interesting Flames player from the calendar year 2022. Jonathan Huberdeau and MacKenzie Weegar came over in a summer blockbuster and then signed max term extensions. Nazem Kadri signed for seven years in free agency after winning a Stanley Cup. But knowing the excitement when Tyler Toffoli was acquired, and how he’s performed since, I decided to go with him.
We’ve already rolled out our top three stories of 2022 and our top moments from the last year are coming on Saturday.

Fans in Calgary had been clamouring for a significant in-season addition for some time. Under head coach Darryl Sutter in his first full year back, the Flames were on track to win the Pacific Division and were playing strong, sustainable hockey. But scoring depth was a clear need projecting towards the playoffs.
On a mid-February morning getting set for practice, Elliotte Friedman tweeted out there were rumblings Toffoli, then with Montreal, would be on the move and Calgary was the team to keep an eye on. Shortly thereafter, we found out the price: a 2022 first-round pick, a 2023 fifth-round pick, prospect Emil Heineman, and forward Tyler Pitlick.
The response from Flames fans was overwhelmingly positive. General manager Brad Treliving’s resume didn’t include a lot of significant mid-season acquisitions, but that narrative changed on Feb. 14. Treliving executed something fans were screaming for and Calgary acquired what they needed: a right shot, top six scoring threat. Toffoli was a big fish and the Flames landed him.

Toffoli was an absolute hit right away and had fans chanting his name one night later in his Calgary debut. Toffoli scored a highlight reel goal in a 6-2 win over Columbus, which started off a great initial stretch with his new team. In his first 21 games with the Flames, Toffoli racked up nine goals and 18 points and looked to be a perfect fit.
Unfortunately, things dropped off down the regular season stretch. Toffoli had just five points in his final 16 games and was fighting it as Calgary got set to open a first round playoff series with the Dallas Stars. A veteran of multiple Stanley Cup Finals, much was expected from Toffoli in the postseason.
And, despite putting up just five points in 12 playoff games, Toffoli was actually very good in the spring. Toffoli was one of Calgary’s most consistent players and generated plenty of quality looks. His most important moment came in game seven against the Stars when he scored a huge tying goal to erase Jamie Benn’s 1-0 marker 40 seconds in.

After an unprecedented off-season that saw leading scorers Johnny Gaudreau and Matthew Tkachuk leave, Toffoli’s role with the Flames became even more important entering training camp 2022. Brought in initially to help with scoring depth, Toffoli arrived for his first camp in Calgary with more offensive weight on his shoulders. And he’s delivered.
You can make a strong argument Toffoli has been the team’s most consistent player all season. On Elias Lindholm’s wing since the beginning of camp, Toffoli leads the team with 15 goals and a 1.44 goals-per-60 rate, is second with 29 points, and third with a 2.78 points-per-60 clip. With a full camp and minus the stress of switching teams mid-season, Toffoli is thriving.
When you consider how much excitement there was when he was acquired in February and the way he’s played in the ten months since, Toffoli was a newsmaker all year long. That’s why he’s my player of 2022.
Editorials
Recent articles from Pat Steinberg