What Calgary Flames assets might teams be asking for in trades? 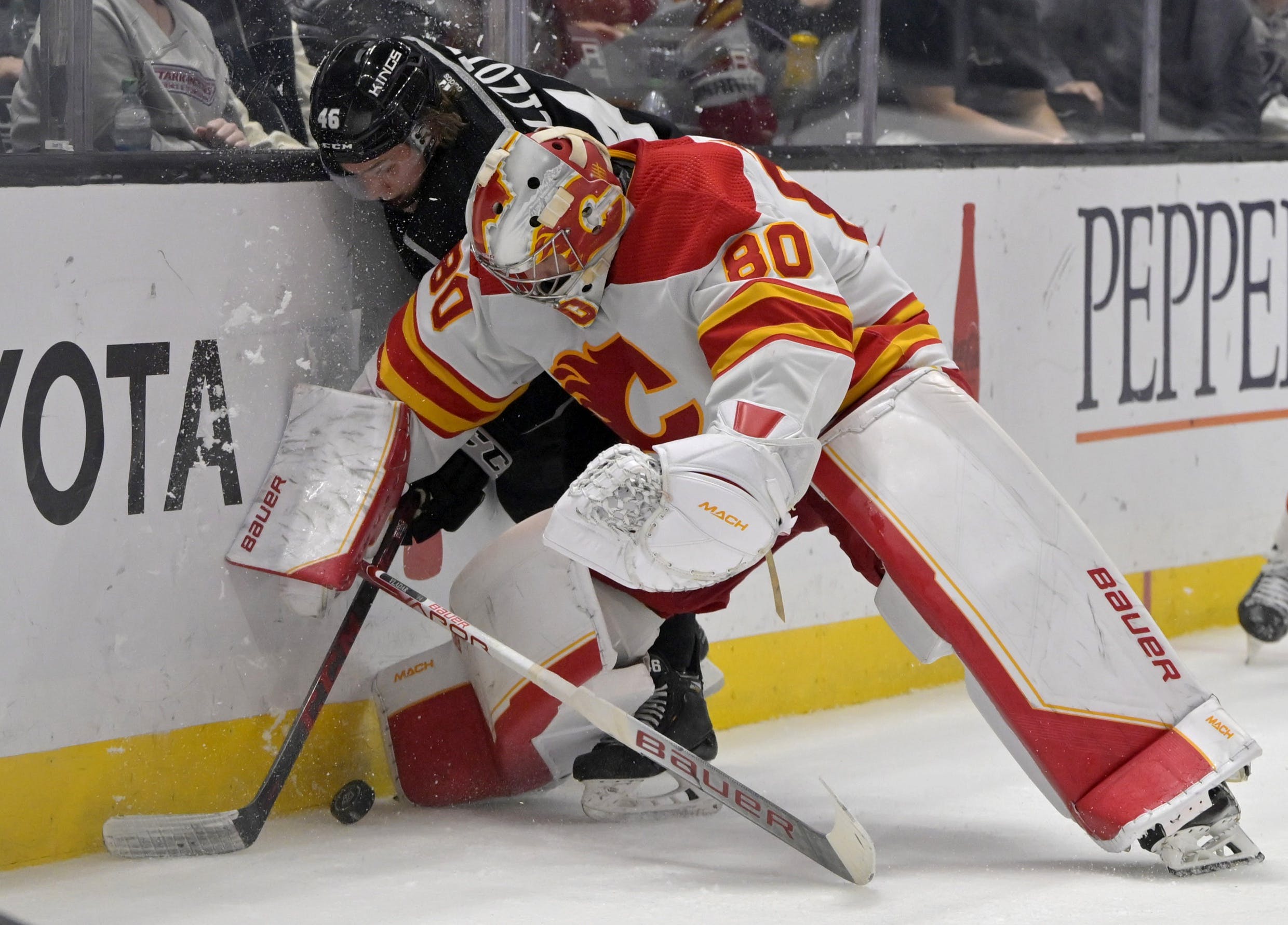 By Ryan Pike
23 days ago
It goes without saying that the Calgary Flames intend to be active before the March 3 trade deadline. But as the saying goes: you gotta give to get, and the Flames have a few assets we think that teams would be calling and asking them about.
Here’s a tour around the types of players (and other pieces) we think Brad Treliving is getting asked about.

2023 first or second-round picks
First-rounders (or second-rounders in good draft years) are always strong currency to be spent. Treliving reportedly was asked, and declined, to include the 2023 pick in the Sean Monahan trade, leading to the Russian nesting doll of conditional picks they’re tied up in for awhile. As a result, the Flames aren’t allowed to move their firsts in 2024, 2025 or 2026 until Montreal receives whichever pick the conditions settle out to. So the Flames might have to bite the bullet and give up a high pick in this year’s stacked draft.
One of their top tier forward prospects (Jakob Pelletier, Connor Zary or Matt Coronato)
If the Flames decline to move their first, teams will probably ask about their young forwards. They have a left wing (Pelletier), a centre (Zary) and a right wing (Coronato) who are all having strong seasons and trending very well. They all have different strengths, but in a trade for a good NHL asset, they could be a big part of a package to land somebody significant.
Dustin Wolf
He might be the top goaltender outside of the NHL right now. You bet Treliving is getting asked about him.
One of their second tier prospects (Emilio Pettersen, Lucas Ciona, Jeremie Poirier or Arsenii Sergeev)
Are they as exciting as the top-tier guys? Well, not quite. But these four guys are promising, despite some rough spots, and in a trade for a secondary asset, perhaps a secondary prospect might work? Or they can be bundled with a second-rounder in a package, perhaps?

Dan Vladar
He’s young! He’s good! He’s signed beyond this season! And if you’re a team that desperately needs goaltending help, Vladar is a really tantalizing asset.
Dillon Dube
Dube’s been having a good season, really taking a step forward in terms of consistency and in-game impacts. He’s also on a good contract, especially relative to his impacts, so teams are going to ask about him.
Adam Ruzicka
Ruzicka’s a fantastic bargain right now at just a smidge over league minimum ($762,500). The Flames might have too many guys on the roster for him to get a regular top nine spot, and teams may gamble that the Flames want to cash out now and get some value back – especially with the Flames having their top forward prospects potentially needing roster spots moving forward.

Good veterans (that the Flames probably decline to move)

One of Mikael Backlund, Blake Coleman or Andrew Mangiapane
Why would teams ask about these guys? Well, they’re excellent at their roles, but aren’t scoring a ton. If I’m a team that needs strong secondary players, these are the types of players I target: cost-controlled (e.g., signed for awhile) but really reliable and smart players.
Why would the Flames not move them? Well, they know what they have and likely value them highly. Mangiapane just re-signed this summer, while Backlund and Coleman have no-trade clauses in their deals.
Milan Lucic
“I guess we could take Lucic’s deal to make the cap math work?” is probably a phrase that gets uttered at some point. But Lucic has a no-move and a no-trade in his deal, so it seems incredibly unlucky that the trigger gets pulled on such a deal.
Oliver Kylington
Kylington’s really good and signed to a really inexpensive deal compared to his probable impacts. If you’re a team that saw his big step forward in 2021-22 and went “Where can I get one of those?” you’ll probably see if the Flames are willing to move him. (There aren’t many players like Kylington around, so we don’t see it happening.)
Inexpensive depth players (Trevor Lewis, Michael Stone or Brett Ritchie)
Are you going to replace these guys with more reliable players or guys that cost less? Stone and Ritchie are league-minimum ($750,000) cap hits and Lewis is just a hair above that ($800,000).

Don’t even ask about ’em

There are players that the Flames probably won’t move unless you make a hefty, hefty offer. So it doesn’t seem to make sense to bother asking about Elias Lindholm, Tyler Toffoli, Nazem Kadri, Jonathan Huberdeau, Jacob Markstrom, Rasmus Andersson, Noah Hanifin, Nikita Zadorov, MacKenzie Weegar or Chris Tanev. It’s not that these guys are untouchable, but between their affordable cap hits or having no-trade or no-move clauses in their deals, it seems unlikely that the Flames would want to part ways with them.
Which Flames assets do you think are most likely to be moved by the trade deadline? Let us know in the comments!
Editorials
Recent articles from Ryan Pike