When it comes to big names, a quiet trade deadline is likely Calgary’s best option

By Pat Steinberg
1 year ago
The April 12 trade deadline is less than three weeks away and the playoff math continues to look bad for the Flames. Monday’s 2-1 loss in Ottawa was another setback on an already difficult uphill climb and didn’t inspire a ton of confidence this group is ready to go on a run. The deadline has typically been quiet under general manager Brad Treliving and this feels like a good year to continue that trend.

Why shouldn’t they buy?

Calgary has a glaring need for a top six right winger and there are tantalizing options out there. Anaheim’s Rickard Rakell, Buffalo’s Sam Reinhart, and Nashville’s Viktor Arvidsson are all realistic right-shot trade targets for a team looking to an upgrade. But knowing how high those acquisition prices are rumoured to be, it’s tough to convince me the Flames should be one of those teams.
Pike did the math and has Calgary needing to go 16-6-1 (or something that works out to 32 or 33 points) to get to 65 points, which seems like a likely playoff ballpark. It’s not impossible, but it feels unlikely knowing how committed this team has been to staying around .500. New head coach or not, Treliving and company have to know a run like that is likely not in the cards.
To give up the assets to bring in a Rakell or Arvidsson with such slim playoff odds seems shortsighted. When you factor in Calgary’s trajectory in the bigger picture, it’s even harder to justify. Acquiring one of those players would absolutely make the Flames better, but I’m skeptical it would be enough to pull .700 hockey out of them down the stretch. Or, more importantly, be enough to turn them into a contender even if they made the playoffs.
There’s one other thing to consider: a player’s two week quarantine if coming from the United States. If a player were acquired from an American team today, they’d be missing eight games while isolating. So instead of getting a player for the final 23 games, the Flames would be getting just 15. That same player would miss seven games if acquired on deadline day, which would only leave him available for Calgary’s final six. It’s just more unpleasant math.

Why shouldn’t they sell? 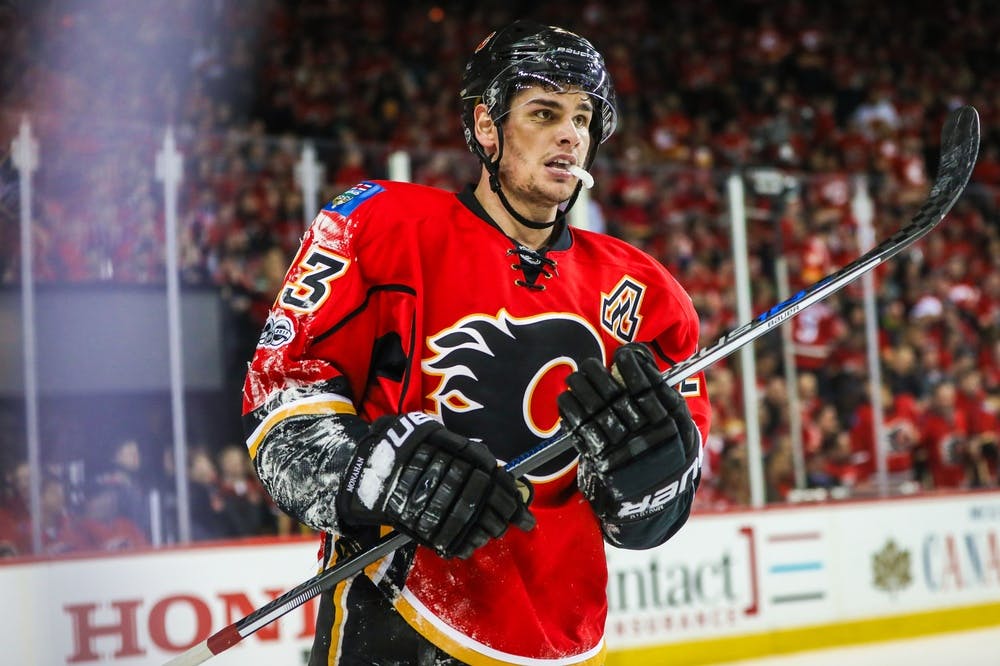 I know many are eager to see Sean Monahan moved here, Johnny Gaudreau there, and Mark Giordano somewhere else. But if there has ever been a deadline NOT to be moving a current and/or former core piece, this would be the one. From quarantine regulations to a flat cap, this is shaping up to be a difficult deadline day. Just look how many, or how few, trades we’ve seen this season.
I’m not saying the Flames shouldn’t be looking to move on from certain players, because we’re at the point where they really should. But take Monahan for instance. If the market was soft for him during the offseason, and it was, it’s not going to be any different now. In fact, knowing his struggles this season, that market is likely even colder.
Some believe Calgary has put themselves in a spot where they’ll be getting pennies on the dollar for some of these trade targets, which might be true. But by waiting until the off-season, at least the Flames would have more potential trade partners as opposed to the very limited options currently. Forcing something now gives Calgary a far lesser chance of completing a fair deal.

What should they do?

Staying quiet doesn’t mean doing nothing, because I think there are feasible moves the Flames could make prior to April 12. Pike put together a comprehensive list of Calgary’s trade assets earlier this week, which is a good starting point. For me, attempting to get something for pending unrestricted free agents like Derek Ryan and David Rittich makes sense. Especially if the team is willing to eat salary, either player could get the Flames a decent return.
The other player to watch is Sam Bennett, who has played most of the season with a public trade request hanging over his head. With three goals and six points in 30 games, Bennett is in the midst of a markedly mediocre campaign. That said, it’s not hard to imagine a good team being interested in the possibility of unlocking “Playoff Sam Bennett” this spring.
Moves like these are sensible and low impact, which is right where Calgary should probably be this deadline. There are probably tinkering additions the Flames could make, too. Troy Terry is rumoured to be looking for a chance fo scenery in Anaheim, for instance. That could make sense if Calgary wanted to buy low on a younger player. When it comes to the significant, franchise-altering moves many are clamouring for, though, the summer feels like a much better time than this year’s deadline.
Uncategorized
Recent articles from Pat Steinberg