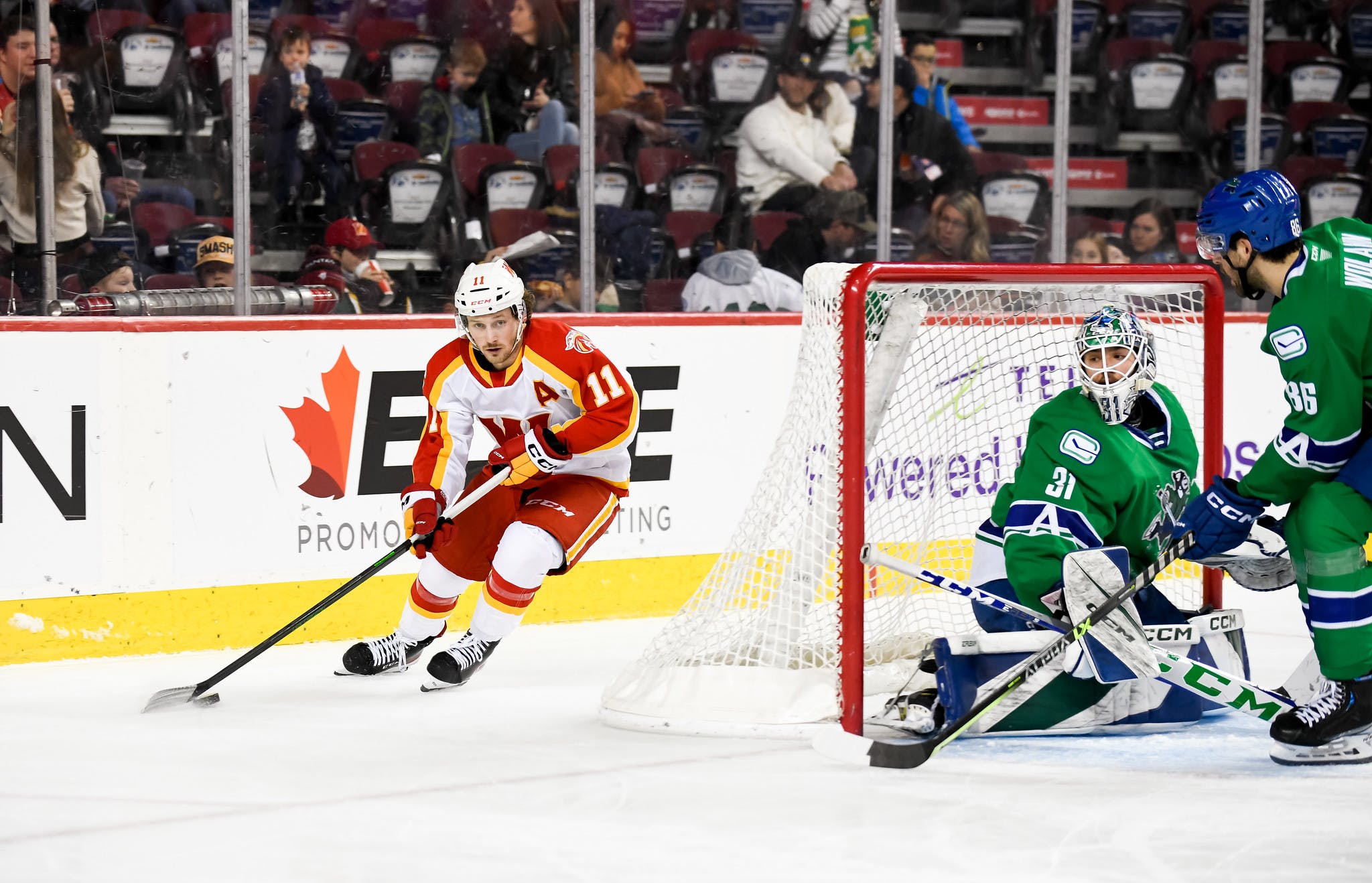 By Paige Siewert
7 days ago
The Calgary Wranglers kicked off a three game series against the Abbotsford Canucks on Wednesday night. They were looking to snap a two game losing streak after a tough series against the Henderson Silver Knights. Were they successful? Narrowly, but yes. The Wranglers snap their brief losing streak with a 3-2 overtime win over the Canucks.

This game brought the battle that would be expected with these two so close in the Pacific Division standings. Calgary looked to snap right out of their funk with some early scoring to get things started.
They scored twice in the opening frame with the opening goal actually coming on the penalty kill. Brett Sutter scored an unassisted shorthanded goal just 6:20 into the game and earned the Wranglers an early lead. This was a funky one that deflected off of the Abbotsford netminders stick and landed in the back of the net. On the scoresheet though? A goal’s a goal and the Wranglers were quickly up 1-0.
Next up was Colton Poolman, who scored his second goal of the year on a feed by Connor Zary 11:25 into the first. Nicolas Meloche also picked up a secondary assist.
It was all Wranglers through the first with a 2-0 lead and out-shooting the Canucks by a whopping 17-4. The second flipped the script quite literally with the Canucks outshooting the Wranglers 15-3 through the period. The fruition of these shots was a lone Canucks goal late in the period with just 18 seconds to go in the second.
The Wranglers went into the third still leading but only by one. Both teams played a more even effort in the third but the Canucks were the only ones to score. They tied things up 13:16 into the third. After this goal, the Wranglers only put up one shot in their efforts in the closing minutes of regulation.
The Canucks had the momentum shifted in their direction but thankfully, Dustin Wolf was there to keep things locked down. He stopped five more Canucks shots as the third game to an end and forced this game to overtime.
As nerve-racking as 3-on-3 overtime can be, there wasn’t much time to be stressed out in this situation. Matthew Phillips scored the game-winner just seven seconds into overtime after Ben Jones won the face-off and he took off with the puck. Blink and you may miss it.
It was a dramatic finish to a solid battle. Shots finished up 31-29 favouring the Canucks. Dustin Wolf put on a performance worthy of the first star of the night, stopping 29/31 shots. Matthew Phillips also deservedly made the three stars of the night at third.

I hope you enjoy Wranglers vs. Canucks because they’re just getting started. They’ll play two more games against each other this weekend on Friday and Saturday. Friday’s game will be at the same time, same place. The puck drop is set for 8:00 p.m. MT.
News
Recent articles from Paige Siewert