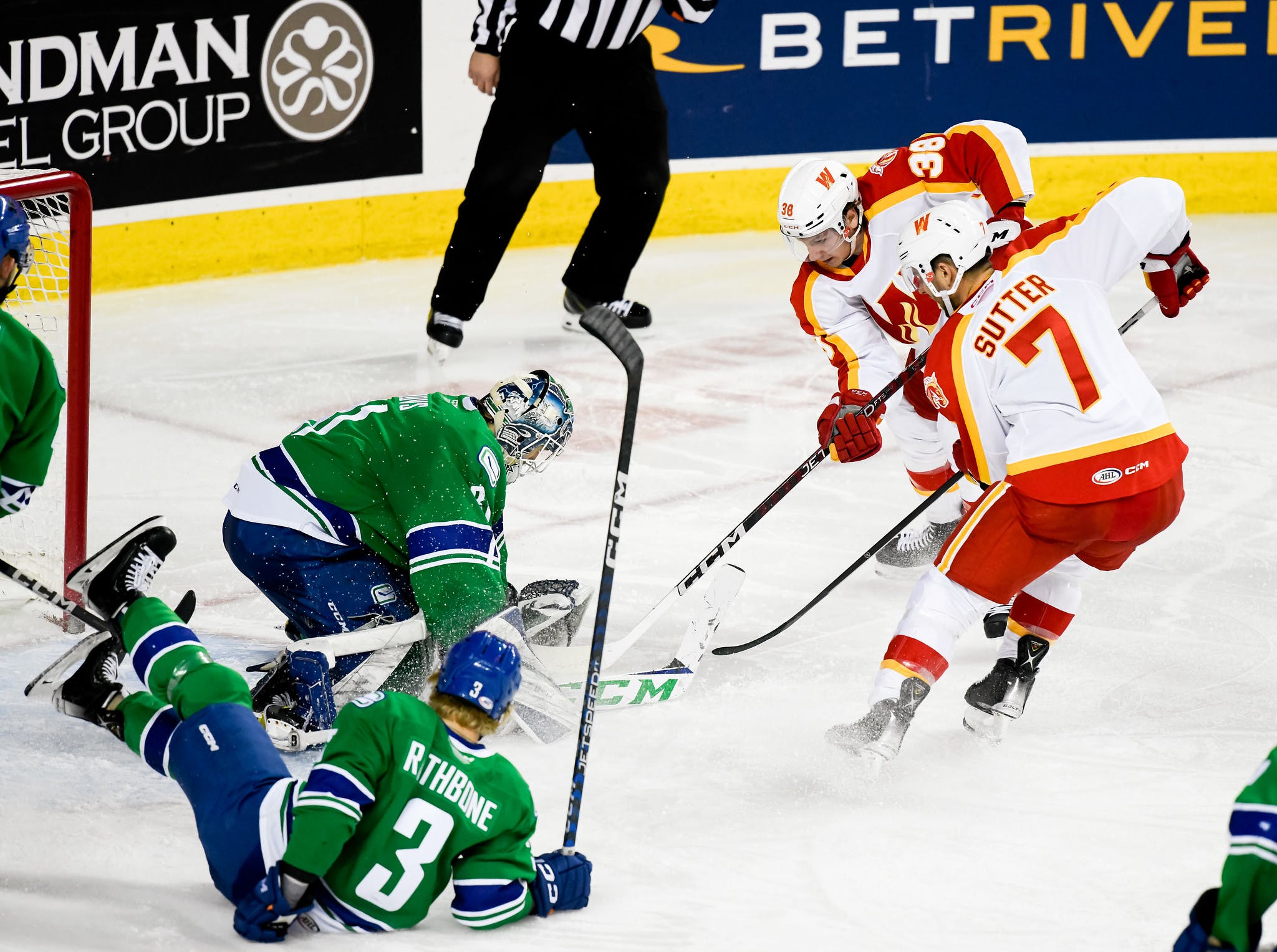 By Paige Siewert
16 days ago
The Calgary Wranglers continue their road trip with their first trio series of the season. They head to Abbotsford to face the Canucks on Wednesday, Friday and Saturday before returning to home ice. The Wranglers lead the season series 3-1 but could fall behind if they do not continue their success against this opponent in these upcoming games. Calgary is currently on a two-game losing streak, but are still 7-3-0-0 in their last 10 games so it is not cause for immediate concern just yet.

There may be some game day lineup changes with the announcement of Rory Kerins and Matt Marcinew returning to Rapid City on Tuesday. The general speculation and pattern of call-ups have caused the fanbase to believe this is clearing the room for Jakob Pelletier to return from his call-up to the Flames. Unfortunately, it was not the chance he would have hoped for as Pelletier got to skate and practice with the team, but did not make his NHL debut just yet.
Some game action could do him some good and make Pelletier climb back up in team scoring. After the Wranglers’ last series, Connor Zary overthrew Pelletier for the second spot in team scoring. Not that stats are the end all be all when you are on the cusp of the NHL, but Pelletier can continue to contribute where he can to hopefully continue to get these call-up opportunities in the future.
It’s a good time for the Wranglers to get some scoring skill back too. They were not able to keep up with the Henderson Silver Knights in their last series and the Canucks have been on a good run of games. Abbotsford has a slightly better record than Calgary in their last 10 games with 8-2-0-0.
This series is an important divisional battle with the Canucks sneaking up on the Wranglers in the standings as well. They are just under Calgary at third in the Pacific division and could overthrow their spot if they are the better team for the majority of this series.
Even without the pressure of the standings, three games against the same team in the same week is a grind. The Wranglers have only played one other extended series this season with a four-game split series against the San Diego Gulls. They played the first two games on the road and returned home for the remaining two between December 2nd-11th. They did very well in this series going 4-0.
All three game times are set for 8:00 p.m. (MT) with this series kicking off on Wednesday evening. Game two will be on Friday night and game three will be on Saturday. All games can be streamed on AHL.TV and Saturday’s game will be offered for free on the streaming platform. FlamesNation contributors Mike Gould and myself will have updates on Twitter.
News
Recent articles from Paige Siewert