Advertisement
Ad
Beyond the Boxscore: Calgary climbs back to victory after Vladar weathers storm 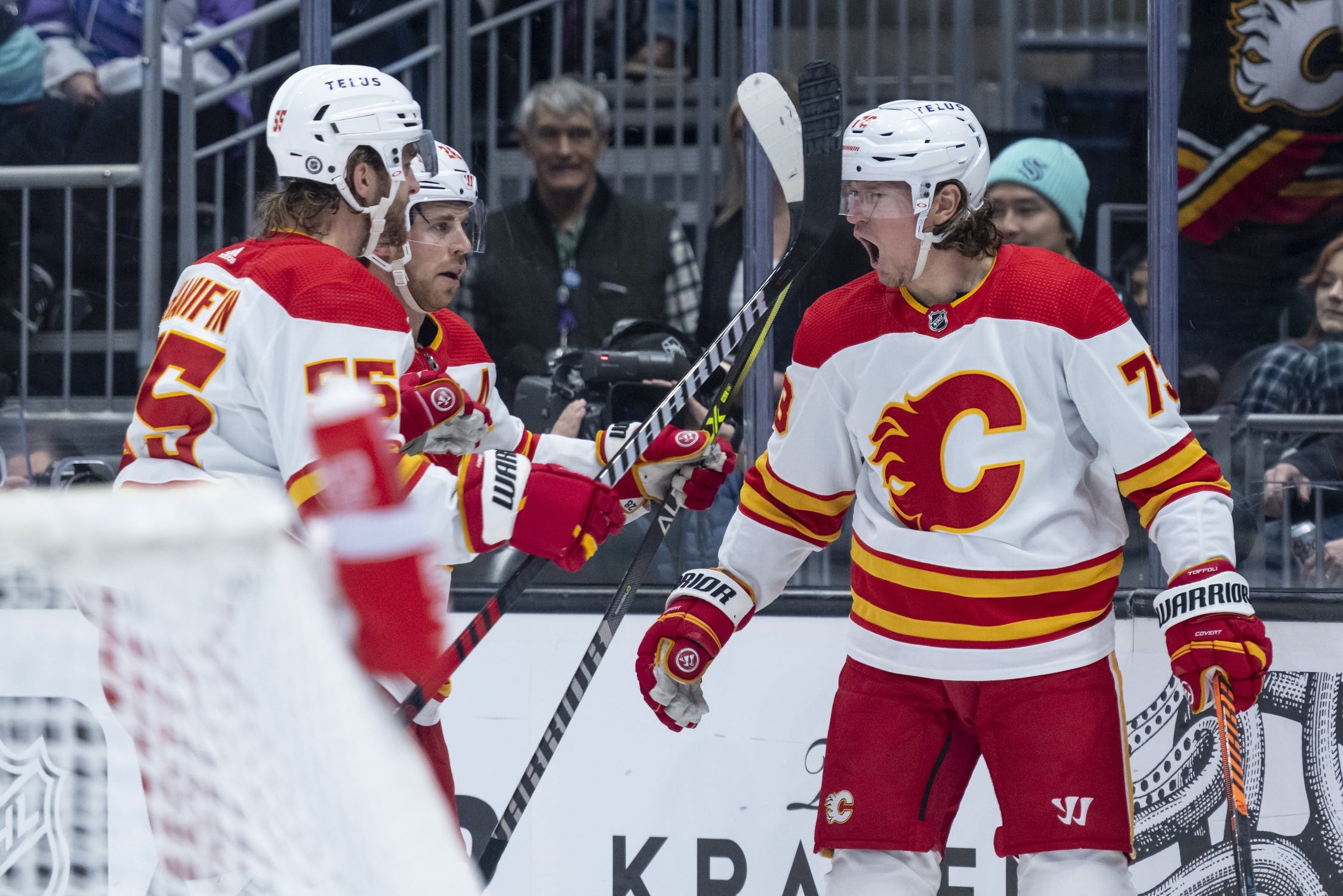 Photo credit: Stephen Brashear-USA TODAY Sports
By Shane Stevenson
28 days ago
Comments
It was a back-and-forth game in a sense that the Seattle Kraken controlled the start and the Calgary Flames controlled the end. Calgary – the team that was on the second half of their back-to-back – got stronger as the game went on. Dan Vladar was solid and weathered the early storm of Kraken opportunities which allowed Calgary to find their groove. It was a disappointing finish after a lot of hard work the night before, it’s got to be a good motivator to get the W right afterwards.
CF% -50.78% , SCF% – 53.93%, HDCF% – 51.99%, xGF% – 54.57%
It’s a Team Game – The push started for Calgary after they got the tying goal. A steady wave of attack after attack came without the need for them to have to kill a penalty either. It was a perfect storm of chance after chance and a whole lot of puck possession. Calgary has seemingly got the recipe for the game they want to play figured out – the players themselves just need to find ways to execute enough within the parameters of that game. Against the Kraken three was enough.
Corsi King – Andrew Mangiapane (75.20 CF%) was noticeably the best Flames forward one night after being the direct cause for two penalties against the Oilers. It helps when Backlund (65.85%) and Coleman (55.93%) are going with him. Mange himself was leading the rush – securing possession – and whacking at pucks around the net whenever he could. He played like the Mangiapane that earned that contract. On the back-end Mackenzie Weegar (52.79%) and Michael Stone (52.60%) were the top gentlemen.
Advertisement
Ad
Advertisement
Ad
Corsi Clown – Elias Lindholm (31.52%) and his line found themselves on the other side of the Kraken’s best players – and yet he still graded out positively in expected goals and high danger chances so getting out shot attempted means next to nothing. The only player to have a negative differential in overall attempts and quality of chances was Trevor Lewis (46.63 CF%)
Under Pressure –
Taken By Chance – It was a whole bunch of high danger chances for both teams in this one. First star should be split between both goaltenders for having to deal with marginal defence. Mangiapane (76.39 SCF% // 86.24 HDCF%) led the way in ratio but raw opportunities that was Rasmus Andersson (56.96% // 59.93%) being involved in over 8 alone. It wasn’t all sunshine and daisies like against Edmonton, some players got outmatched 5v5. Weegar (44.45% // 25.75%) and partner Tanev (41.63% // 15.07%) got buried against the high danger chances the most.
Advertisement
Ad
Advertisement
Ad
xG Breakdown –
xGF% – Dillon Dubé (78.78%) himself has been really good away from the puck lately. Strong games every night and using his speed to properly forecheck and cause turnovers has done wonders on that line with Lindholm (54.73%). If he can bring the forechecking ability Tkachuk did with twice the speed this could work out well long term. Here’s hoping that strong connection keeps up. Milan Lucic (51.73%) has brought that simple aspect of playing hockey to playing with Jonathan Huberdeau (52.37%). It may be what’s helped him find some regular success of late in terms of actual production – It’s easy to know what Lucic is going to do on the forecheck and smart players like him can anticipate his actions. Anything that gets him more touches of the puck is a good thing.
Advertisement
Ad
Advertisement
Ad
Game Flow –
Game Score –

Shot Heatmap –
In The Crease – Dan Vladar just continues to impress every time he hits the ice for a game. Cool, calm, collected and never lets anything get him off his game. 3.32 expected goals against at 5v5 with one high danger and one medium danger goal getting by him. He tends to not let in any weak goals and makes the other team work to score on him. Worth every penny of the extension given to him.
Today’s Specials – Nazem Kadri in the middle of the ice on the power play works – nobody needs to claim that saying first because it’s been a well-known fact for ages. Calgary not always using him as the bumper is a colossal failure. His goal came a bit lower than the bumper spot usually is, but he was set up in the right spot. Keep him in the middle and you’ll find more success almost nightly.
Advertisement
Ad
Advertisement
Ad
Player Spotlight – Tyler Toffoli – That was a nice gritty work-hard goal to get things started off for Calgary. Out-muscle the defenders and scrap for a goal in the blue paint. Not enough goals can be scored like that for the Flames – guys aren’t getting enough garbage goals this year. Not for a lack of trying, there’s just been no finish, except from Toffoli whose now up to 15 on the year. Consistent as anybody on the team this year.
The Goals –

TOFF!!! Finds a rebound in front of the net and tucks one in to open up the scoring. 1-0 🔥 #Flames pic.twitter.com/SCIF6NBYqO

NAZ!!! Tips one in past Philip Grubauer on the Powerplay and ties this game at 2 🔥🔥 #Flames pic.twitter.com/Y0waiVEpBO