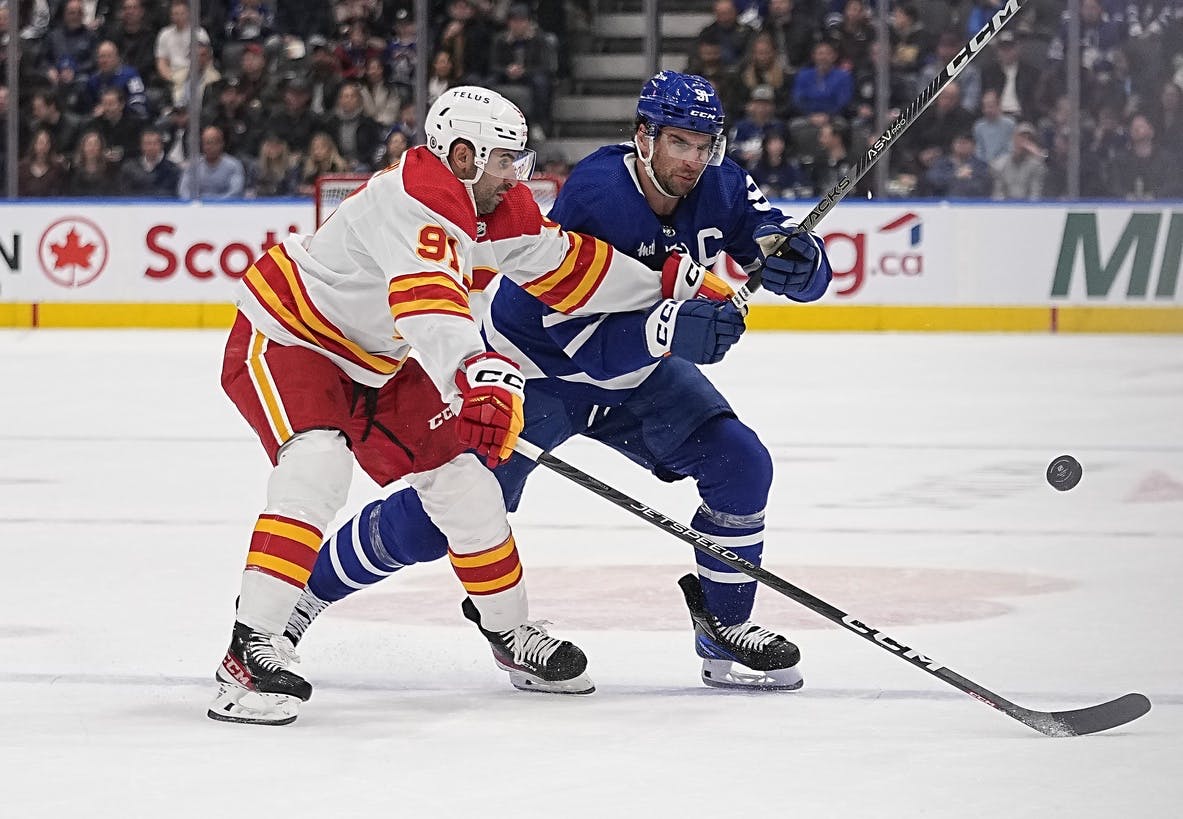 Photo credit: John E. Sokolowski-USA TODAY Sports
By Ryan Pike
1 month ago
Comments
Be sure to check out NHL betting site Betway for the latest Flames game day odds!
It was the best of times, it was the worst of times. Playing the back half of a back-to-back against a strong, rested Toronto Maple Leafs squad, the Calgary Flames played a really effective road game at even strength. But their lack of discipline led to three Leafs power play goals, including the game-deciding marker.
The Flames lost 5-4 to Toronto in overtime. They went toe-to-toe with a strong Leafs team, but found a way to lose.

This game was fairly low-event, but generally pretty dang entertaining.
The Leafs opened the scoring early, after the Flames took a minor penalty. Blake Coleman had a scoring chance at one end that he couldn’t cash in, and Auston Matthews fired a shot past Dan Vladar when the play shifted in the other direction.
Advertisement
Ad
Advertisement
Ad

Chance at one end for the Flames.

Goal at the other for the Leafs.

The Flames tied things up a little later during a sequence of four-on-four play. Jonathan Huberdeau found Noah Hanifin jumping into the rush, and Hanifin’s wrister beat Matt Murray to tie the game at 1-1.

Jonathan Huberdeau with a nice feed to Noah Hanifin who puts it home. Flames tie the game! pic.twitter.com/ZZX1yoNEjM

A little later, the Flames took the lead off a nice sequence. Andrew Mangiapane tried to set up Dillon Dube in the slot with a pass off the rush. The puck bounced just over Dube’s stick, but Dube chased down the errant pass and found Nazem Kadri entering the zone off the bench as the trailer. Kadri beat Murray to give the Flames a 2-1 lead.

Nazem Kadri scores against his former team with a great shot!

But with Mikael Backlund in the penalty box late in the period, the Leafs answered back, as William Nylander beat Vladar five-hole with a clean look to tie the game at 2-2.
Advertisement
Ad
Advertisement
Ad

William Nylander ties the game on the PP for the Leafs.

Brutal cross checking call on Backlund to put the Leafs on the power play. pic.twitter.com/Ci8S6HHmso

First period shots were 9-6 Maple Leafs (5-3 Maple Leafs at five-on-five) and five-on-five scoring chances were 7-1 Maple Leafs (high-dangers were 1-0 Maple Leafs).
The second period was more tight-checking, but the Flames grabbed the lead midway through the period.
Off a nice zone entry by Matthew Phillips (after which he headed for a change), Backlund hit the cross-bar. The puck went off the iron to the boards to Murray’s left, where Trevor Lewis (joining the play in Phillips’ spot) rushed into the zone, beat the Leafs defenders to the puck, and blasted a shot past Murray to give the Flames a 3-2 lead.

Trevor Lewis scores and gives the Flames a 3-2 lead! 🔥🔥🔥 pic.twitter.com/RpI7nAdMLC

But the Leafs tied things up before the end of the period. Behind the Flames’ net, Matthews stole the puck from Chris Tanev and threw it to the point area for Nylander. Nylander’s wrister glanced off Tanev in the slot and deflected past Vladar to make it a 3-3 game.
Advertisement
Ad
Advertisement
Ad

Second period shots were 11-9 Flames (9-9 at five-on-five) and five-on-five scoring chances were 8-6 Maple Leafs (high-dangers were 4-2 Maple Leafs).
The Flames took the lead early in the third period. After Rasmus Andersson drew a minor in the neutral zone, the second power play unit cashed in with a weird goal. Hanifin’s shot from the wing was grabbed by Murray, but he didn’t freeze the puck and it trickled under his arm and into the net. The play was initially whistled down, but reviewed by the situation room and called a goal. That gave the Flames a 4-3 lead.

But Toronto answered back quickly. Andersson couldn’t connect on a defensive zone pass, which gave the Leafs a couple chances. The initial shot from Matthews missed the net, but it ricocheted off the end boards and right to Michael Bunting (who wasn’t tied up by Andersson out front), and Bunting beat Vladar in-close to tie the game, again, at 4-4.
Advertisement
Ad
Advertisement
Ad

The Leafs tie the game for the third time tonight.

Bunting gets the goal.

Regulation solved nothing, and so this game required extra time.
Third period shots were 14-7 Maple Leafs (10-6 Maple Leafs at five-on-five) and five-on-five scoring chances were 10-7 Maple Leafs (high-dangers were 4-3 Flames).
Huberdeau took a high-sticking minor off the opening overtime face-off. On the ensuing 4-on-3 advantage, Mitch Marner retrieved his own rebound and beat Vladar to give the Leafs a 5-4 overtime win.

The Flames played well enough at even strength to win this game. They were out-chanced, sure, but given the circumstances and how opportunistic they were with their scoring chances, they had the game right there for the taking.
Unfortunately, some sloppy play and lack of composure led to too many penalties taken by the Flames. The Flames gave the Leafs six power plays. They scored on three of them, including the game-winner in overtime. That’s the game right there. As a result, the Flames leave Toronto with just one point when they probably deserved more than that.
Advertisement
Ad
Advertisement
Ad

Hanifin scored twice and was generally very good, so he gets the nod here.

The Flames absolutely cannot take another penalty in overtime and give the Leafs’ top-notch star players extra space and puck touches on a power play. They did so, and it cost ’em dearly.

Milan Lucic was a healthy scratch, with Matthew Phillips playing in his place. Phillips played on the third line and the second power play unit and was generally quite good.

#HockeyOps explains video review of Noah Hanifin’s goal at 3:31 of the third period in the @NHLFlames / @MapleLeafs game. https://t.co/nlIvya61SA

So why did Hanifin’s second goal count? From the league:

The Flames (13-11-4) finish off their road trip on Monday night at Bell Centre against the Montreal Canadiens.