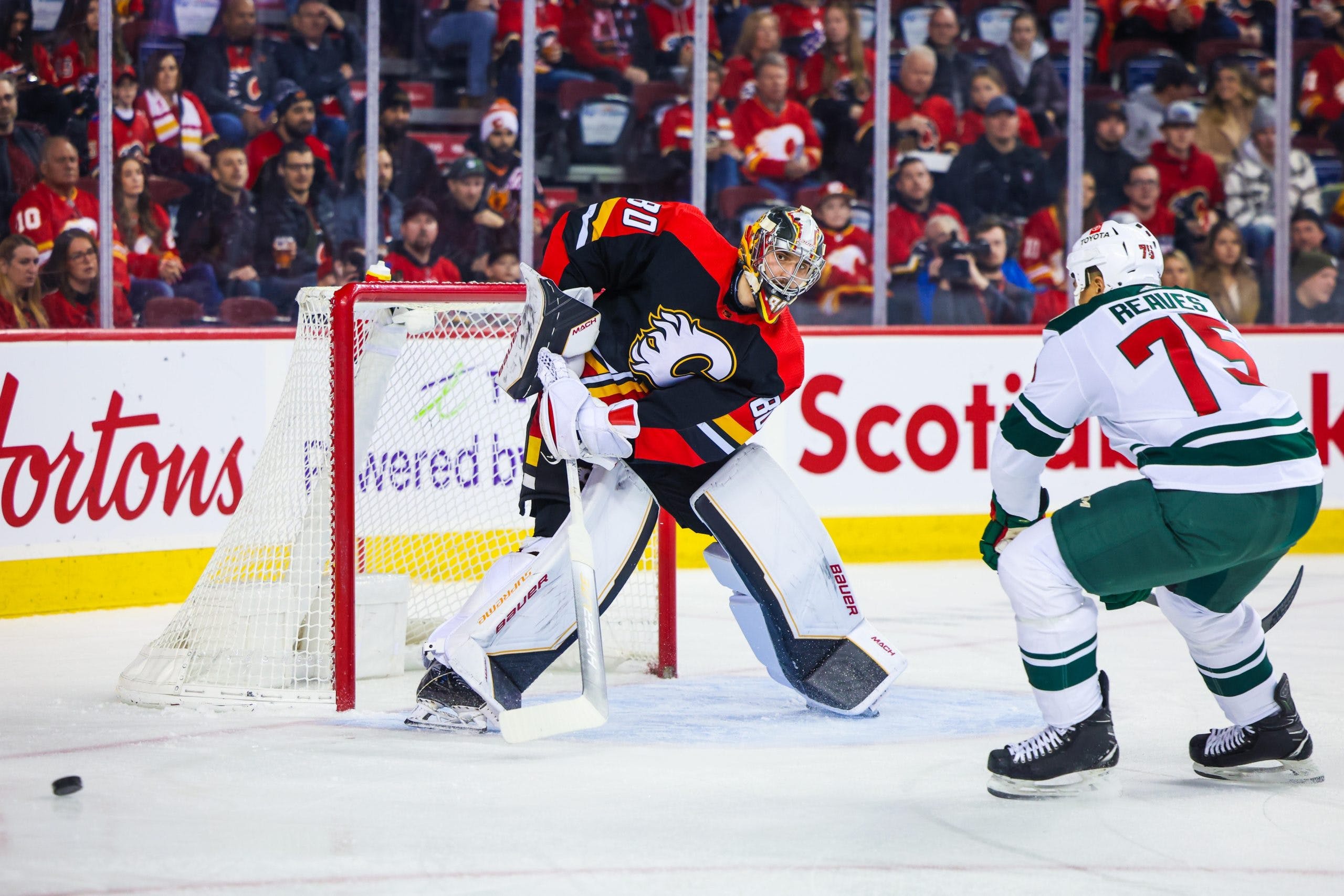 Photo credit: Sergei Belski-USA TODAY Sports
By Ryan Pike
1 month ago
Comments
Be sure to check out NHL betting site Betway for the latest Flames game day odds!
Mid-week games between the Calgary Flames and Minnesota Wild have not traditionally been particularly exciting hockey games. Wednesday night’s meeting between these two clubs featured goals, usually scored in bunches, and some fairly structured, even play between the two clubs. The action was few and far between, but the game did have some.
The Flames rallied back from a pretty poor opening few minutes, eventually capturing a 5-3 victory over the Wild. The Flames have won three games in a row.

The Flames were quite flat early in this game, and the Wild took advantage.
1:27 into the period, a pass between Chris Tanev and MacKenzie Weegar below the Flames’ goal line didn’t find its intended recipient. The Wild stole the puck, cycled it to the point, and Kirill Kaprizov’s stick broke as he tipped a Mathew Dumba shot past Dan Vladar to give the Wild a 1-0 lead.
Advertisement
Ad
Advertisement
Ad

58 seconds later, Minnesota struck again. The Flames’ fourth line got caught up ice, with nobody covering for a pinching Michael Stone as the Wild began transitioning up ice. That left Nikita Zadorov defending a two-on-one, and Connor Dewar’s pass got through Zadorov and Mason Shaw got a back-door tap-in to give the Wild a 2-0 lead.

The Flames got a pair of power plays after going down 2-0, but couldn’t generate a ton. They had a third advantage that spilled into the second period.
First period shots were 8-8 (five-on-five shots were 8-6 Wild) and five-on-five scoring chances were 8-3 Wild (high-dangers were 5-1 Wild).
16 seconds in, on the carry-over man advantage from the end of the first period, the Flames got on the board. Nazem Kadri deflected a slap-pass from Elias Lindholm (from the right point) past Marc-Andre Fleury from the slot to cut Minnesota’s lead to 2-1.
Advertisement
Ad
Advertisement
Ad

Nazem Kadri gets the Flames on the board. Second game in a row with a power play goal.

81 seconds after the first goal, the Flames scored again. Mikael Backlund drove into the Wild zone but couldn’t find a shooting lane. So he passed it over to Adam Ruzicka, who drove his way to the net. He didn’t fully make it, but the puck blooped to Blake Coleman at the far post and he deposited it behind Fleury to tie the game up at 2-2.

Great start to the 2nd period for the #Flames pic.twitter.com/VBR5Jr0BOq

Dumba was called for a puck-over-glass minor in his own zone, and the Flames cashed in for their second power play goal of the period. After a bit of cycling around the offensive zone, Rasmus Andersson’s slap shot from the point glanced in off Tyler Toffoli to give the Flames a 3-2 lead.

The Rasmus Andersson point shot goes off Tyler Toffoli and in. That's the Flames fourth power play goal in the last two games.

Second period shots were 9-9 (five-on-five shots were 7-4 Wild) and five-on-five scoring chances were 6-4 Wild (high-dangers were 4-2 Wild).
Advertisement
Ad
Advertisement
Ad
The third period remained as even as the prior two periods were, as the Flames tried to kill the clock and pad their lead, while the Wild were trying to claw their way back into this one.
The Wild had a late power play that the Flames killed off – the Wild got a bunch of momentum, though. Jon Merrill’s point shot glanced off Tanev and past Vladar to tie the game up at 3-3.

Jon Merrill ties the game late in the third period.

But before they had a chance to announce the Minnesota goal, Andersson took a pass from Coleman and drove the net, waiting out Fleury and back-handing the puck past him to give the Flames a 4-3 lead.

Rasmus Andersson gets the one goal lead back for the Flames just 12 seconds after the Wild scored to tie the game.

The Wild pulled their goaltender with around three minutes left in regulation. But the Flames battled, won the puck back, and Toffoli added an empty-netter to give the Flames a 5-3 lead (and victory).
Advertisement
Ad
Advertisement
Ad
Third period shots were 11-10 Wild (6-5 Flames at five-on-five) and five-on-five scoring chances were 6-6 (high-danger chances were 4-0 Flames).

This was an odd game. It was a 6 p.m. MT start – an hour earlier than usual – and the Flames looked a bit disjointed and low-energy early on. But they got better as the first period wore on, and they were pretty good in the second period.
Were they far-and-away the better team? Heck no. But they were opportunistic, especially on special teams, and it gave them a fighting chance.

Let’s go with Toffoli, who scored the eventual game-winning goal (off his body). But he also kept the puck moving up ice and generated a lot of chances in the offensive zone.
Also worthy of specific praise: Vladar, Andersson, and the line of Ruzicka, Coleman and Backlund.
Advertisement
Ad
Advertisement
Ad

In the opening 3:11 of the second period, the Flames registered three shots on goal and drew one penalty. All three of those shots went in.
Andersson’s go-ahead goal, immediately after Minnesota tied the game, was also obviously very important.

This game was Armed Forces Appreciation Night at the ‘Dome, and the Flames wore special jerseys during warm-up.

The Flames (13-10-3) are hitting the road! They play three games in four nights between Friday and Monday, starting on Friday with a trip to visit Johnny Gaudreau and the Columbus Blue Jackets.