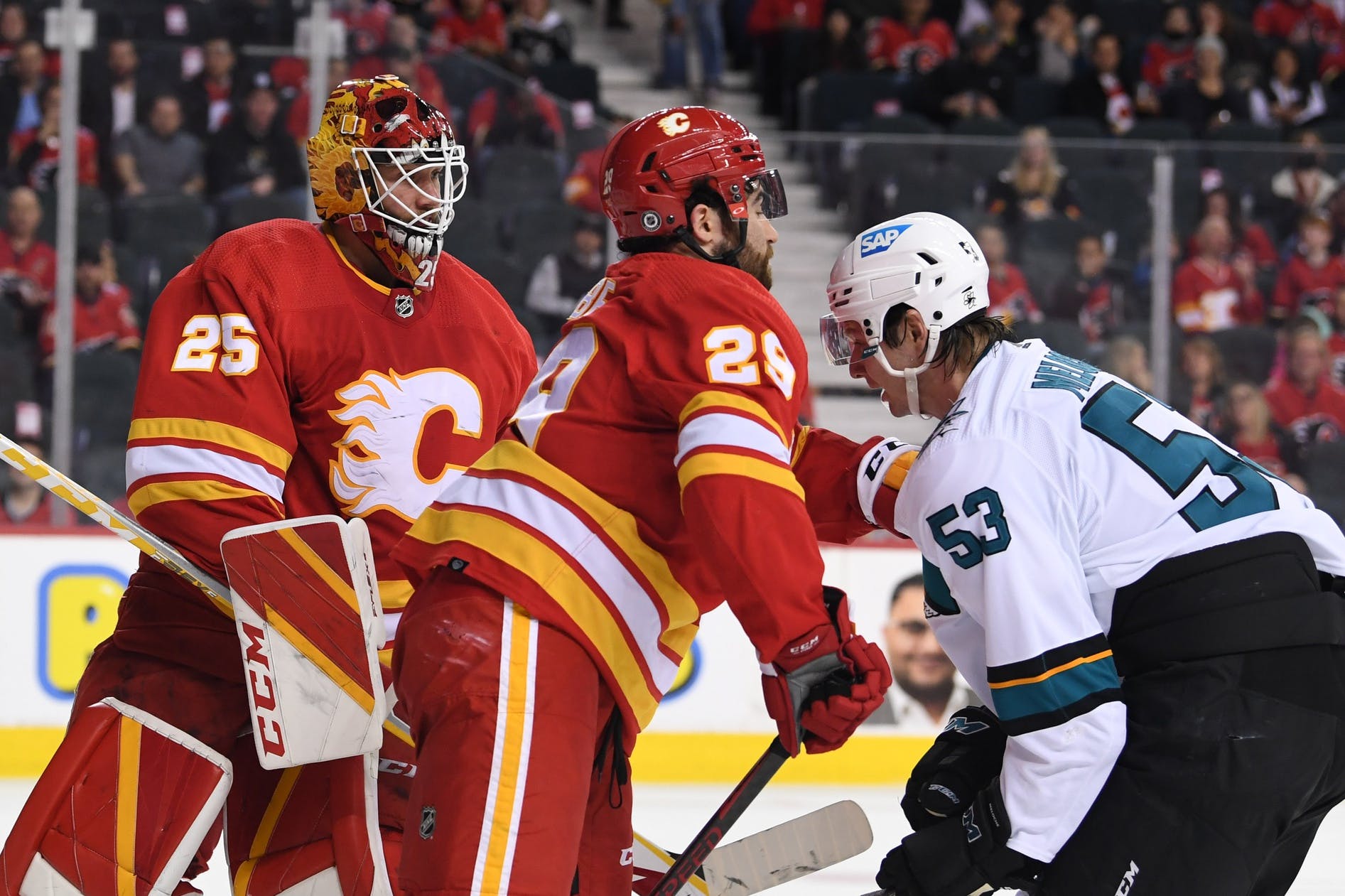 Photo credit: Candice Ward-USA TODAY Sports
By Ryan Pike
8 months ago
Comments
The Calgary Flames were pretty good on Tuesday night when they hosted the San Jose Sharks. But a couple iffy goals past their goaltender early on, combined with some iffy defending in the third period, led to a game that was far closer than it should’ve been.
Ultimately, defensive zone lapses cost the Flames, and they dropped a 4-3 loss to the Sharks.

The Flames got off to a good start, generating a few nice scoring chances early on. After a nice pass by Mikael Backlund sprung his linemates for an odd-man rush, Dillon Dube drew a penalty (on that rush). On the ensuing power play, Johnny Gaudreau dumped the puck right in on James Reimer, leading to a rebound and utter confusion among the Sharks penalty killers. A couple quick passes later and Gaudreau was all alone in front of Reimer with the puck, beating him to make it 1-0 Flames.
Advertisement
Ad
Advertisement
Ad

A little later in the period, the Flames scored again! A couple good possession shifts in the Sharks zone eventually wore down their defenses and paid off. Matthew Tkachuk intercepted a Sharks zone exit attempt. He went to pass it deep to Backlund, but the puck careened off a defender’s skate and went right to Dube in the slot. Dube buried the scoring chance to give the Flames a 2-0 lead.

But the Sharks answered back before the period ended. Sean Monahan’s line couldn’t muster a zone exit, culminating with Monahan putting an exit attempt right onto the stick of Marc-Edouard Vlasic. Vlasic unleashed a quick wrister from the point that beat Jacob Markstrom just inside the near post to cut the lead to 2-1.
Advertisement
Ad
Advertisement
Ad
Shots were 14-9 Sharks (10-7 Sharks at five-on-five) and scoring chances 7-6 Flames in the first period.
The Sharks played a bit more of a structured defensive zone game in the second period, but the Flames took advantage of a miscue in the neutral zone to pad their lead. Gaudreau stole an errant puck in the neutral zone and entered the offensive zone with Backlund. He found Backlund with a precise pass, and then Backlund cut to the net, deked, and backhanded the puck past Reimer to make it 3-1 Flames.

The best word to describe this goal? Pretty. pic.twitter.com/zppCS5GfhX

Gaudreau drew a penalty shot in the second period after Brent Burns fouled him on a breakaway, but Reimer gloved his penalty shot attempt.
Advertisement
Ad
Advertisement
Ad
But the Sharks inched closer near the end of the period. A Burns point shot was stopped by Markstrom, but Timo Meier chased down the rebound and spun and fired. His shot from a bad angle – he was basically straddling the goal line in the far left corner of the zone – deflected in off Markstrom to cut the lead to 3-2.
Shots were 12-10 Flames (11-5 Flames at five-on-five) and scoring chances 14-9 Flames in the second period.
The Sharks tied it up midway through the third period, as the Flames got running around in their own zone and couldn’t clear the puck. Tomas Hertl made a nice pass from behind the net to Alexander Barabanov, who beat Markstrom from the net-front area to make it a 3-3 hockey game.
Advertisement
Ad
Advertisement
Ad
Just 28 seconds later, the Sharks took the lead. The Flames, again a bit scrambly in their own zone, were victimized by a few quick Sharks passes. Logan Couture beat Markstrom to make it a 4-3 Sharks lead. The Sharks held on for the victory.
Shots were 14-10 Sharks (14-5 Sharks at five-on-five) and scoring chances 11-7 Sharks in the third period.

Let’s get this out of the way: Markstrom has had better nights. He’s definitely earned the benefit of the doubt, but he wasn’t particularly strong on this evening.
But after being really sharp for the first 30-or-so minutes of the game in their own end, the Flames struggled to adjust to San Jose’s forecheck and they just kept getting hemmed into their own zone in the third period.

Allowing two goals in 28 seconds in the third period was certainly not a positive.

Newly acquired forward Ryan Carpenter arrived in town on Tuesday night and was a healthy scratch.
This was the first time the Flames lost in regulation after leading through two periods. They were 31-0-2 in that situation prior to tonight.
The Department of Player Safety are going to have a couple things to review from this game. First, Markstrom speared Nic Meloche in the groin in the first period.

Another replay of the 2nd "slash" by #Flames Jacob Markstrom to #SJSharks Nicholas Meloche pic.twitter.com/eTeuRttF8V

The Flames (38-17-8) are back in action on Friday night when they host the Arizona Coyotes.