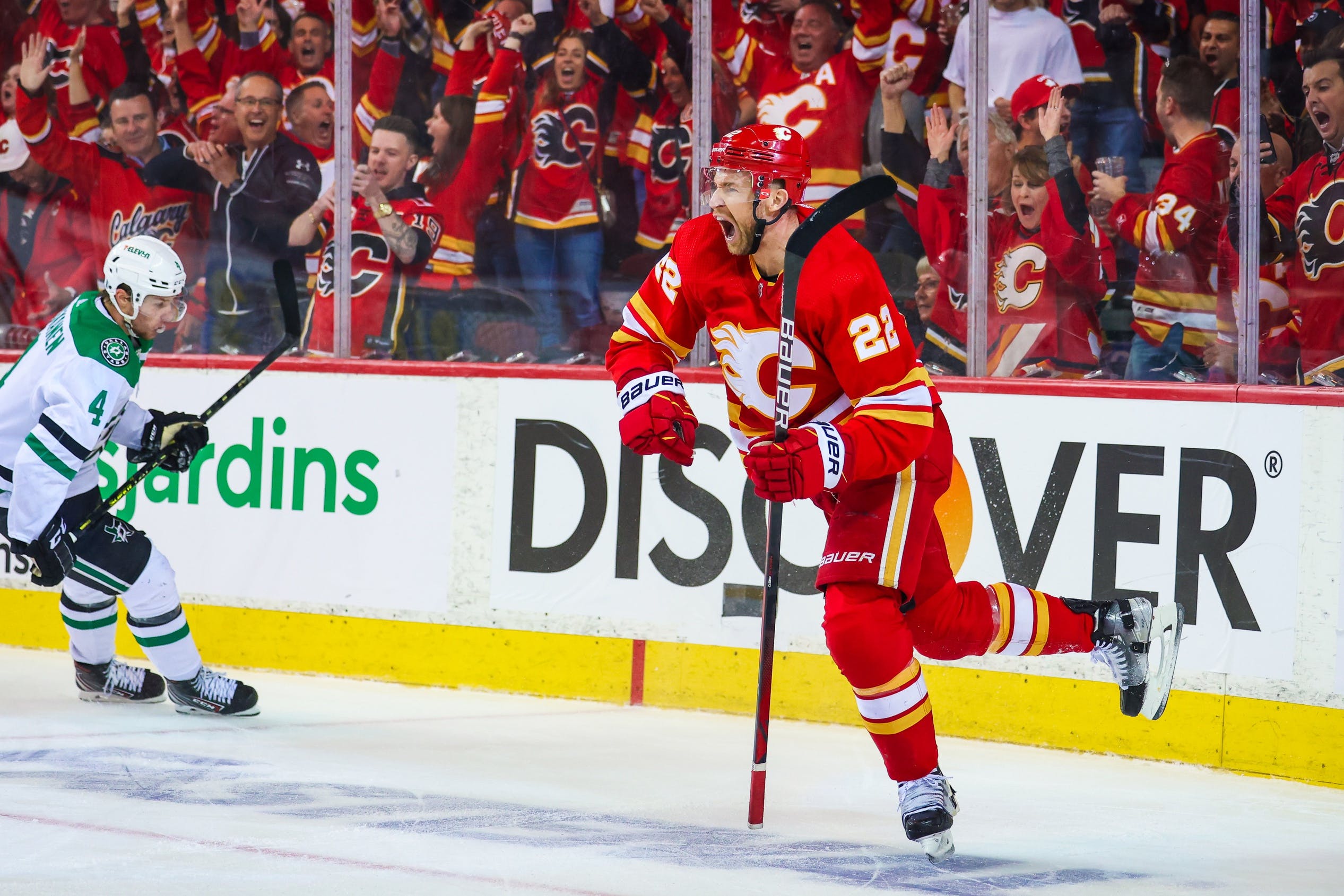 Photo credit: Sergei Belski-USA TODAY Sports
By Ryan Pike
8 months ago
Comments
After trailing 1-0 through two periods, the Calgary Flames found another gear in the third period of Game 5 against the Dallas Stars. Three unanswered goals powered the Flames to a 3-1 win on home ice and a 3-2 series lead against Dallas.
The recap is here, if you missed it. Here are selected highlights and post-game comments from Wednesday night.

On how the game unfolded: “Close game, every game. Every game’s either tied or close in the third period. So, no different than any other one.”
On the difference from Game 4: “It was a tight-checking game. Dallas really tightened their game up and we had some guys that weren’t quite ready for that, so we had to do some adjusting, moving around. Close games.”
On moving Matthew Tkachuk away from Johnny Gaudreau and Elias Lindholm in the third period: “Line had no pace. They were playing a way tighter game. The line had no pace.”
On Mikael Backlund’s play in Game 5: “The line was really good in the third period. Plus, the penalty kill, right?”
Advertisement
Ad
Advertisement
Ad
On having two chances to close out the series: “Well, Game 3’s a lot tougher than winning Game 2. And a lot of our players have never won a Game 3, so Game 4 will be a lot tougher than winning Game 3.”
Andrew Mangiapane

"It's always great to see the fans outside of the rink, cheering us on. That's awesome. The Red Lot, it's great."

Andrew Mangiapane and Mikael Backlund on the energy at the 'Dome and winning Game 5. pic.twitter.com/rxMB3K7uZN

On if the team changed anything in the third period: “I don’t think so. I think it was a tight hockey game, it’s a tight series. We’ve just got to stick to our game, and not deviate, stay patient with it. Stick to our system and keep grinding them down, and eventually it paid off in the third.”
Mikael Backlund
On the team being bottled up through two periods: “I think it was lots on us, too. We weren’t close to our best. I don’t know why. They play a tight game. It’s been a tight series the whole five games. If we’re not on our best, we’re not going to create and play in the O-zone and be the better team. So, they have a really good team, that’s just the thing. If we’re not on our toes and not playing the best way that we can, it’s going to be in their favour.”
Advertisement
Ad
Advertisement
Ad
Dallas head coach Rick Bowness
On how the game got away from them: “They took it to a better level. We didn’t handle it very well. We stayed with them for two periods, obviously. They cranked it up in the third period.”